Doctor Who - A Pond Dries Up

Doctor Who - A Pond Dries Up

So Doctor Who, for the remainder of the year, is all over and now we're two companions short of a power of three. But for those of us who miss the old Doctor Who Confidential, here's a little quick goodbye to Amy and Rory.

Now let's talk about the episode.. Cause really, I over thought it the last time around. But hey, what about that statue of liberty... Fuck you, French people. Giving us a large Angel at our doorsteps. Which was sort of strange when it started moving, because, really. How the hell does that even begin to work?

Then again, it's not like the statue of liberty is a stranger to roaming around the city.

They just assume someone somewhere is playing Higher and Higher.


I'm left wondering what just happened. I mean, if you stop and think about it for even a few seconds, there was a ton of plot holes that could swallow people whole. The whole purpose of fixed point and having it in a paradox is to make sure you could write off the Ponds without having them come back.

I don't by it. You know, given that all last season was about the Doctor showing us that he could flip the bird to fixed time. What with him not dying after he died. Though I guess he didn't cheat the universe out of killing him, For all the talk that time could be rewritten or time can't be rewritten, the events involving the death of the doctor revealed that time can only be misrecorded.

What I did like the most was the growth of the characters in just one episode. It was an amazing character arc to leave Amy finally taking up Rory's last name and having the tombstone say Amelia Williams. 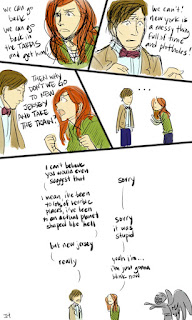 On the other side, the whole suicide thing was a bit strange. Strange enough that BBC had to air a little warning before;


"If you have been affected by any of the issues in tonight's episode of Doctor Who..."

I think I'll send them a strong worded letter with the following;

As someone who lost his parents in a time travel accident, I found the lack of a trigger warning tonight very offensive..."

I guess I didn't see it as suicide at all. I thought it was meant as an extremely literal leap of faith. They trust the Doctor and his view of the situation enough to put themselves in a situation which will either solve all problems, or prove to be a certain death for both should the Doctor turn out wrong. So, it's not really different from the rest of the series in terms of danger.

Besides, to the best of my knowledge, no one has ever committed suicide in real life because they were trying to create a temporal paradox.... At least no one NOT already in the crazy bin. Then again, maybe I just never heard of anyone doing it, not like we'd ever know about it anyway.
Posted by Booster Gold / Javier J. at 4:43 AM