Mommy, I Can Marry A Princess!

Mommy, I Can Marry A Princess!

Besides deciding if you want Change you can believe in or some old dude, Californians have another thing to worry about when in that voting booth. How will they circle the other little options. A hot button proposition is Prop 8. You may know this prop as the one that has the most insulting ads on the air paid for those faggots who want you to vote Yes on Prop 8.

I call them faggots not because they are gay. No, I actually don't think I ever called a gay person a faggot. Why? Because I only call people acting faggy a faggot. Like if I ask for extra ketchup at the drive-thru and they say they only can give me two packs. Total fag move. Seriously those of you who are voting YES on Prop 8, stop being such faggots. Why do you have to hate on gays and their interest to get married?

I say if they want to get married, well then, they have every right to be as miserable as straight couples who are married. Look at the latest wave of ads those bicycle riding Mormons have been paying for

Pony up the cash for a private school or shut the fuck up!

I suppose parents should expect more Cinderella/Sleeping beauty fanfics to come out of that. What confuses me is that in the polls, Prop 8 is on the way to getting passed. This troubles me. We're California! What happened to the feel-good, come-as-you-are, live-and-let-live hippie paradise, but apparently we've just swapped one breed of thickheaded intolerant bigot for another. Why California, why will vote for Barack Obama by, like, 16 points but won't pass this? I know that behind the OC curtain there's a lot of Republicans but are there just a lot of socially conservative Democrats hiding in the bushes? I'm sure their in the wastelands of Bakersfield and all of Kern county that aren't embracing any diversity.

Then there's this ad which shows a kid who will clearly be tainted when she's asking for Barbie's "friend" Ellen instead of Ken for Christmas. Certainly can't be responsible for teaching her anything other than the norm of man and wife getting hitched. Oh wait, I know, why not hold off on teaching children about anything at that age. Stop filling their heads with visions of being a princess finding a prince anyway since it's a fucking fairytale that only leads to spoiled brats seen on MTV's My Super 16th.

Clearly marriage should remain something between two plastic dolls. If we let them gays marry, what's next? Dogs marrying Cats? Pigeons marrying squirrels in the park? Oh wait, I already did that last one when I got my mail-order minister license and had a field day at the park. I'm just taking charge and doing my duty in making the park a less sinful place where marriage matters!

I'm pretty serious when I say that the fact that this is even up for debate is pretty disgusting. If you vote yes on 8, you're subhuman. The claim for those supporting a yes on the prop is that:

"Children have a right and are entitled to have a father and a mother."

This is the worst anti gay rhetoric I am gonna hear for a long long time. Yet their website, where you can take a stupid video quiz that is a perfect example of ignorance and being a bigot, they point out this

"Prop. 8 isn't out to remove rights. In America, we all have the "right" to have a relationship. But what about the legal right to marry?"

Seriously. The name of the fucking prop is "ELIMINATES RIGHTS" and people are going to vote yes in droves.? Since when do children have the right to have a father and mother? Is everyone who donated money to Yes on Prop 8 part of a two parent home and not divorced, like 50% of all marriages in America seem to end up? Forget a mother and father. We should just hope that children have two GOOD parents raising them. Who cares if they're both from the same sex. I just want to know where it says "Thou shalt not allow gay marriage" in the bible.

Forget learning about Marriage, how about they learn tolerance?

It's sad that it only takes 50%+1 is all that required for a constitutional amendment. California is a big state with plenty of good spots. But then there's the spots that aren't the major cities between L.A. and S.F. with plenty of room for idiots. Way to run the state into the ground. We used to be ahead of the pack in accepting change. California used to be cool, what happened to you Cali? What happened?

What does another's personal life effect you so much? Is your marriage hanging on a string that their union would destroy the meaning of yours? The no on 8 ads should just be like, Yo idiots 11,000 gay people got married since may, nothing has happened to your sacred marriage since then! 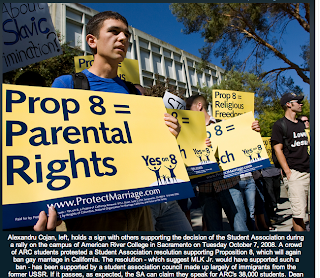 MLK's Dream was for fucktards like this to go to hell.

Then there's those who are simply voting Yes on 8 because they don't want the marriage license to suffer the change of having MAN and WIFE written instead having SPOUSE1 and SPOUSE2 written in its spot. Do you honestly give a shit about what your marriage license says? Whens the last time anyone even look at theirs? Does a wife love their husband less if he's "spouse2" on the marriage license instead of man?

Do conservatives even realize the boon that same-sex marriage would have for our current tax system? from a purely fiscal standpoint (and not from a standpoint of a repressed sexual identity crying out to be acknowledged) , it would be stupid not to legalize it 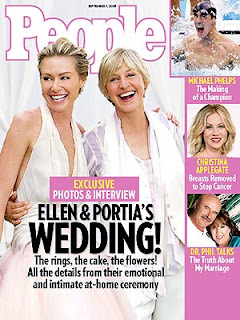 Ellen is hip with it, why aren't you?

And not to mention the wedding industry. If you're some community college photography or film major I question how you could be voting yes on this. The majority of the work that will keep you alive after you "get out of college" will be from booking wedding jobs as the photographer or camera guy. Your main goal is to try to have more people get married. So limiting how many people can get married... fuckin' stupid!

With marriage comes divorce, roughly half the time. So you tack on all the court fees that the increased divorce rate will bring about and you have yourself a way to get out of this terrible debt our state is in. I got a flier that said:

"Tolreance of gay marriage will become Mandatory. YES ON PROP 8"

As if tolerance is some sort of grave sin. You know what else was made mandatorily tolerated? INTEGRATION, you George-Wallace-Channeling fundie dipshit fucks! If this passes, I hope all gay people in California go completely postal and conduct civil unrest with massive riots. Hope you queer as folk folks take to the streets and make the Rodney King situation look like the summer of love. Make it one fabulous wreckage.

I promise you this, religious nuts. If prop 8 passes I'm going to kill God myself

VOTE NO ON PROP 8