A Childhood Fantasy Come To Life: The Hoverboard

A Childhood Fantasy Come To Life: The Hoverboard

I don't think I'm alone when I was young in praying and hoping that the hover board from back to the future II existed. I think it was a school rumor that they actually made them and that they would be on the market some time, if not for all the accidental deaths they caused.

I put it behind me with the realization that there will never be a skate board that hovers in my life time. I accepted this fact. Then some god damn french guy had to go and make a god damn hoverboard!

No. That is the answer. It uses these things to levitate. Fucking magnets, how do they work? I wonder. So it doesn't say anything about water, but hey, it's a start, right? It's also the end. 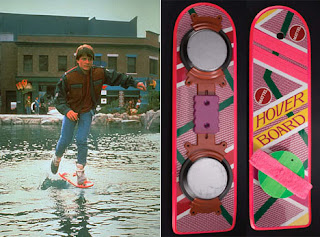 Now if only we can get streets made out of those bases alternatively we could make the bases themselves mobile. This way you can hover your way around. The only problem is putting those bases on something that moves... perhaps by something like, say putting them on wheels. At that point we can finally ferry around our pet chihuahuas in our hovering designer bags as we go see Jaws 20

Maybe I should just hold out for Mr. Fusion.
Posted by Booster Gold / Javier J. at 4:38 PM