Last Saturday I bet you were wondering why it couldn't be this Saturday soon enough. Well, I'll tell you - Because that would be two points in time that aren't suppose to touch! Do you want the universe to not have begun? Huh?! Well today is the day.. It's the day that the Tardis blows up everything in existence.

You see, there are cracks in the fabric of the universe.

Thanks a lot, Doctor Who! You and your silly Tardis just caused the end of existence! Wait, when you think about it.... it's far more fucked up than you think. The Doctor lets his wife/girlfriend/Rani/Sweetie/whatever take his vehicle out for a spin, and not only does she end up totaling it, she blows up the fucking universe too!

Women drives! I tell you.

I love the call back to the Van Gogh episode and it explains where he is driven mad near the end by visions of his friends blowing up. That is just what a depressive personality needs, constant horrific nightmares of the end of existence for real. The universe was sort of a dick to that guy when you think about it.

That cliff hanger was brutal to everyone involved. The Doctor laying it on Amy about her life.

"Does it ever bother you, Amy? That your life makes no sense?"

When he points out little things like Amy living in that huge house all by herself in only one room it kind of hits home just how bizarre she and her life actually is. I'm anticipating and dreading today's episode. Sure, we get our resolution - but we'll have to wait months for any new Doctor Who goodness. 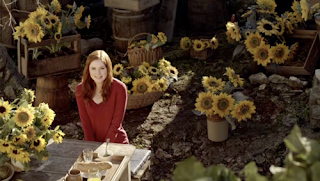 I mean, how the hell are they going to get Amy back? Worse is how she got nailed by the realization that she forgot her boyfriend who died and here he is again... only oh yeah, he's actually a killer robot and not your dead boyfriend.... and he just killed you. Hope you had a good day!

And just to cut the speculation of Karen and Matt dating, I'm pretty sure Matt Smith is banging Gavin Rossdale's daughter, not Karen. So this means it's good news for for all of us devoted Karen fans who have a crush on her to reassert our confidence that they still have a snow balls chance in hell with Karen Gillan. The answer is.. we all don't. 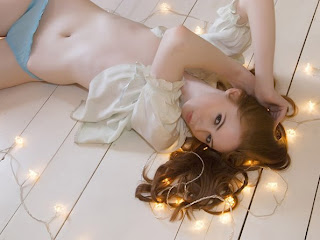 Now you'll call me crazy but this following speculation and theory as to what is going on makes a whole lot more sense than I'd like to believe. It's my current favorite theory to why Amy's life makes no sense.

In the prelude special to TEH on BBC America, Moffat goes out of his way to remind us:

The TARDIS is a living being, referred to as "she".
Anything is possible with the TARDIS.
The TARDIS is the one true love of the Doctor's life, his most faithful companion.
The pictures/models in Amy's room are: Amelia, the Doctor and the TARDIS.
(And if you look at the close-ups of her room in TPO, the TARDIS is most emphasized.)
The paint in Amelia/Amy's room is referred to in Confidential as "TARDIS blue".
The Doctor refers to Amy as the "mad, impossible Amy Pond."
Amy's house is "too big", according to the Doctor. Since, TEH, I've always thought it looked bigger on the inside.
Amy's house door looks just like Craig's upstairs "TARDIS" door, except the colors are inverted.
Their stairways, Amy's second flight of stairs up and Craig's stairs up are suspiciously similar.
Time works very strangely around Amy. If you watch TEH again, only paying attention to the clocks and watches in it, you'll see what I mean. From Big Ben, to Amelia's kitchen, Amy's watch an instant later to the clock by the duckless Duck Pond, time is completely inconsistent throughout the episode. Time acts bizarrely around Amy in other episodes, too.
Listen again to the last scene in The Beast Below.
Amy says she understands how Bracewell feels. Why?
Amy knows things about the Doctor she shouldn't be able to know. For example, how does she know the Doctor doesn't usually allow anyone to salute him? Nothing in the series episodes or novelizations gives her that knowledge, at least not yet.
Amy says to the Doctor, standing in the TARDIS, "There's a whole world in here, just like you said." (Anagram Ledworth = the world)
Listen to the scene again in Amy's Choice, when the Dream Lord talks with Amy alone. "He always leaves you alone in the dark." "He'll never apologize."
Vincent says, "half human" and the camera focuses right on Amy.
The "TARDIS" at the top of Craig's imaginary stairs needs a "pilot". The concept art drawing from River's diary shows, "Amy Pond, TARDIS 'Pilot' " (quotes around pilot are on the page). 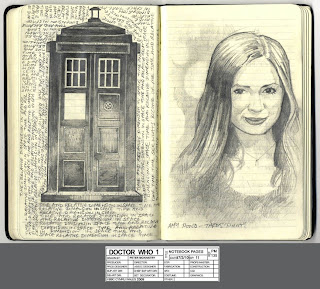 Care to check out more of this sketch stuff? Click here

[There are several other clues from the novelizations, but in case people haven't read them yet, I've decided not to include them on this list.]

The chameleon arch technology which made the Doctor human in Human Nature is part of the TARDIS. Why wouldn't she be capable of doing the same to herself? Especially considering the damage done to that part of the old TARDIS at the end of EOT/beginning of TEH. It may not have been intentional.

Or like the young boy in The Empty Child, Amelia was a real little human girl who's house caught on fire when the burning TARDIS landed there. (She's got drawings of her house on fire.) I prefer the chameleon arch, but we know Moffat wrote the TEC.

Did you notice that when Amy died, the TARDIS with River cracked and the universe exploded?

and last but not least, from the Doctor himself:

So, yes, my favorite theory for this series, which doesn't actually mean I think it's right, is that Amy herself is an aspect of the living being at the heart of the TARDIS.

Oh ... one more thing. Look again at the very first glance we were given of Amy Pond

disguised as a police officer 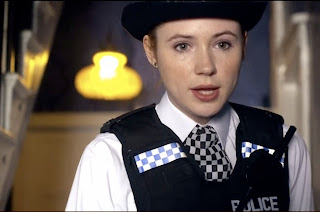 Hmmm, blue and white checkered with a Police logo.. sounds familiar. Then you have the Doctor - Who is stuck in a Pandora's box sort of deal now. Kept forever alive and stuck in there away from his exploding box just to ensure that humanity survives.

It seemed to be a running theme through New Doctor Who. The Doctor has been played up as being a being of vast power and magnificence: the lonely God, the Oncoming storm, etc. We even see this in how enemies that may stand against him run in the abject fear after realizing who he really is and what he's capable of, just like in The Eleventh Hour. 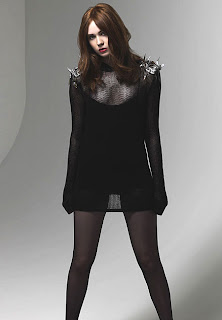 It really does seem that the legend of the Doctor recites, "A nameless, terrible thing; soaked in the blood of a billion galaxies" could very ell fit The Doctor from the point of view of his enemies who have lost so much in battles with him time and time again. They don't see him the way we do, as a hero. They see him as a terrible, destructive being who inspires the most abject fear and dread in them whenever he waltzes onto the scene.

Just look at him in a couple of episodes this season where he nearly, if not specifically chooses humans over other species to save because of a crack in the universe we are lead to believe is his doing. Can't say his reputation isn't being known for being a complete bad ass. 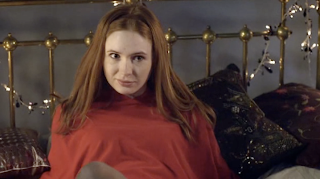 I would be sort of sad if The Doctor Who season finale doesn't bring up or answer the whole no ducks in the duck pond question. I mean, Ducks again in his rambling speech in Flesh and Stone. If 'Duck Pond' is so he'll tell miss Pond to duck, why bother bringing it up again? There has to be something more to it, right?

Then if you think about it, the night that the Doctor first brought Amy into the Tardis is the same night Amy came on to the Doctor, and the same night River found landing marks on the house ransacked... Now that's one busy evening.

Then there's this Image of the Day.. you know, if this day was June 4th.. 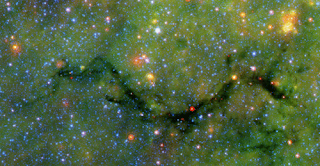 "A cosmic snake appears to slither across the plane of our Milky Way galaxy in this image from NASA's Spitzer Space Telescope. The snake-like object located about 11,000 light-years away in the constellation Sagittarius is actually the core of a thick, sooty cloud large enough to swallow dozens of solar systems and may be harboring beastly stars in the process of forming.

'The snake is an ideal place to hunt for massive forming stars as they have not had time to heat up and destroy the cloud they are born in,' said Dr. Sean Carey, of NASA's Spitzer Science Center..."

Oh the Doctor has his hands in everything. :p And with that, I do believe I will wrap it up and wait for the ending of this most wonderful season of Doctor Who.

Oh, did you want another picture of Karen? Why hey, I'm sure I could fulfill that request.... 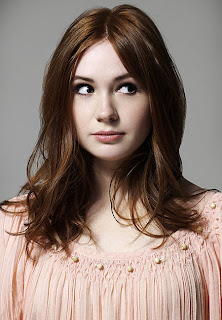 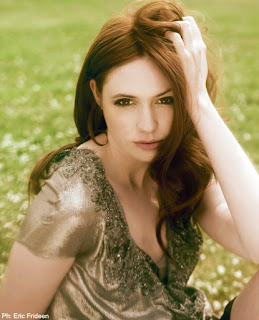