In case you over slept and didn't notice that there was a parade today. Or if you didn't hear about it over the weekend or see any flags on cars.. or, you know, don't watch sports cause it's all a bunch of sweaty people tossing a pigskin around or something, The underdogs from Los Angeles took home the big prize last week. 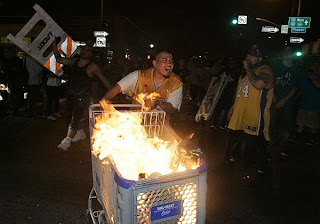 Yes, we should celebrate the totally unpredictable win and praise Kobe (who didn't rape her, FYI) as the best NBA player ever. 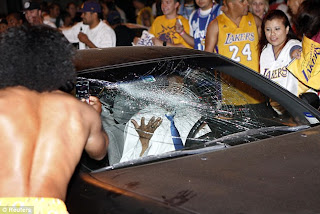 Nooo, Lakers fans! You're directing your rage at the wrong people here with this burning of stuff in Downtown. I know it's a ghost town and all, but there's some nice bars here that I don't want to get trashed. Well, I guess you can burn down Seven Grand if there's enough USC Trojans in it, but it would still be a loss of a perfectly good bar.

But think about it, what a way to play into the idiotically constructed media narrative of post game riots. I know it's not just Lakers fans who do it. Every city during any sports event finals that happen have people who go out into the streets to celebrate by burning some shit up. 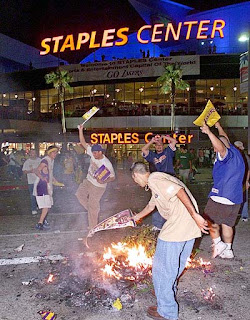 Then again, maybe it was overblown. Five guys throwing up signs and lighting small fires which were put out pretty quickly does not really make for a text book definition of a riot. But it does make you question the mentality of the human race. Hell yes! My team won! Time to get really drunk tonight on account of all my hard work. Go us, I really made it happen.. with Kobe's help of course. Woohoo!

I do wonder why you would really riot when the league is structured in a way that assures your city is one of the 4 lucky ones that get a championship at least once every 5 years. I mean, was it any surprise at all that the finals came down to Celtics and Lakers? The regular season is an after thought when you look at the end result being the same time and time again.


Ron Artest was celebrating the big win during the post game interview and man oh man.. good times. "First, I wanna thank everyone in my hood." then he follows it up with "Screw Disneyland, I'm going to Compton"

But it wasn't everyone who was happy. There's always Doc Rivers and Bill Simmons who like to think that the Lakers didn't REALLY win because they had one of their guys out. And yet here's what Doc Rivers stated about losing Kendrick Perkins before Game 7:


“The starting lineup still hasn’t lost. They still haven’t had a chance to properly defend their title.”

In other news, Andrew Bynum was completely healthy and played a complete game at full power, right?

But anyhow, let's take a look at what the folks who are celebrating did...


NOTE: This raw and unedited video, obtained by the LAFD, contains senseless acts of vandalism, fire-setting and mature language

oh no, mature language! At least the Taxi cab owner is getting a big fat 10,000 check from AEG (Staple Center's owner) for the car. I'm sure he'll use that for season tickets to the Lakers next season when we go for a three peat! Woot woot!
Posted by Booster Gold / Javier J. at 9:51 AM