The season of Breaking Bad is about to come to an end in another two weeks and that means that it's going to be another long wait till the next season of it. Sure, I have Mad Men to look forward to in the summer but then what? Oh, let me tell you... The Walking Dead is what!

AMC just released a couple of images of the upcoming Robert Kirkman television translation of the very popular comic book of THE WALKING DEAD. So here, enjoy this snapshot of what's to come... 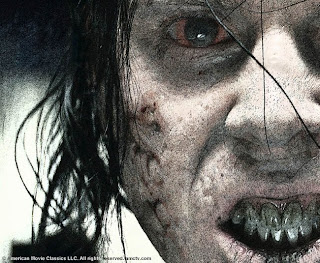 So what is The Walking Dead and why should you be reading and/or excited as hell about the news that this is the latest AMC show? The Walking Dead is a monthly comic book published by Image, written by Robert Kirkman and drawn mostly by Charlie Adlard, who is a really cool guy and I have an original zombie sketch by him. Before Charlie, Tony Moore was the original artist and the one that most people seem to enjoy. It's been going on for about six years and is currently at issue #71

The premise is that a Kentucky police officer wakes up in the hospital to find himself in the middle of a zombie apocalypse. From there, the book hits a lot of familiar notes often found in zombie literature. There is little focus on the macro. Society has collapsed, but we don't get the specifics of how that went down. Instead we focus on a relatively small group of survivors and slowly learn-as in most zombie literature-that the real threat is man's inhumanity to man. It really becomes a case of doing George Romero's original concept a lot better than Romero can. 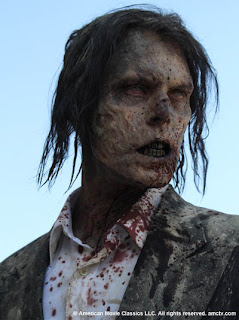 What makes this book special is its format more than anything else. Being a comic book with no end in sight, Kirkman is able to really show the characters grow, form a real group, and how they survive. It's really what zombie fans have always asked for and it's in black and white. So the fact that it still sells amazingly well goes to show you that not even a lack of color can stop how well received this is.

The important aspect to this is the characters and how they develop over the course of stories. The pacing is a tad slow at the start, but it reads nicely in trades. In fact, this is the one book I actually encourage people to avoid the single monthly issues and wait for a new trade paper back to come out because it becomes slow torture to actually wait for it month after month. 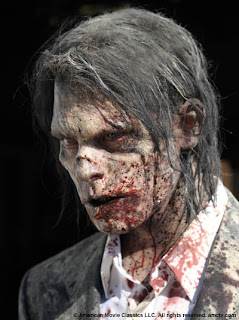 If you're a zombie fan, then I have to question your sanity if you aren't reading this book. It's definitely best to start from the beginning. Don't worry that we're 72 issues into it - you will seriously pick up the first trade and plow through it and be upset that you have nothing new to read. The book is collected in many different formats that you can browse on amazon. Earlier this year, a compendium collecting the first forty-eight issues was released. It might be the best bang for your buck.

But that's if you want to read the books. Let's focus on the TV show here. The show follows Rick Grimes, a small town Sheriff of Cynthiana, Kentucky, who wakes up from a coma into a world that has suffered a zombie apocalypse. As you can see, they're not going to change much on that angle. It will be interesting to see how the show translates to TV as it's well known for being vicious towards its character survival and safety. Not to mention that it has, you know, zombies who eat flesh in it. 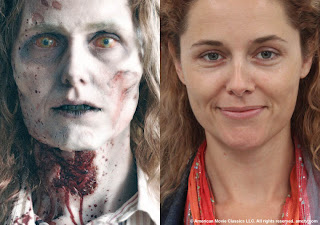 This shouldn't worry anyone that the show will be censored or watered down. I remember reading an interview where AMC's one note for The Walking Dead is that you can't say "fuck." And as you can see from the images above, they're going to go for the gore and not apologize for it. You know what you are getting into when you tune in.

The show will debut during AMC's horror marathon Fearfest, so they are taking the marketing into account here. In fact, that's an even better cross promotion. It seems that AMC is running on a good cycle where they show Mad Men through the summer months and will have The Walking Dead take over Halloween as well as lead all the way till the start of the year when Breaking Bad comes back. Clearly this is the most awesome line up possible.

It really makes me glad that AMC is the one making this. I've been really impressed with their other series and I think they will have no problem pulling it off. Especially considering how much support they put behind their productions. Going the extra mile to actually show on location. Breaking Bad is done entirely in New Mexico and the Walking Dead will be shot in Atlanta.

If I were writing the series bible, I'd break the first seasons down like so:
Season 1 (6 episodes) introduction; Rick vs Shane
Season 2 (13 episodes) Journey to Prison
Season 3 (13 episodes) Prison

But veering off the plot as necessary. This way you folks wouldn't worry about reading the books as being a method of ruining the show for yourself. The first season is going to adapt the first volume, but around 1/3 of it is going to be new stuff. In fact, the creator of the comic book has insisted that they deviated from the comic book.

KIRKMAN: I've told Frank flat-out that I do not want him to follow the comic to the detriment of the show. I encourage him to veer off if he has something that will work really well on TV that wouldn't work in a comic. I don't want people who enjoy the comic to be watching the TV show and going, "Oh, this is leading to that one thing I already know about from the comic."

I believe that sounds like the best approach. Some things happen in the comic that just wouldn't work on TV, and like wise there's somethings you could do on Television that would not work in the comic book. I feel like capturing the tone of the comic is a lot more important than following the plot panel by panel. I loved Watchmen, but maybe somethings didn't needed to be literal translations.

Two shows that nailed this perfectly are Dexter and TRUE BLOOD. It stuck with the books as long as it made sense to and then veered off on a total tangent at just the right moment. I mean, Have you've read the True Blood books? Those things are god awful. The worse piece of literature you could possibly read. Dexter did somewhat the same in the later books. Becoming something that I would hate it to be if they did a literal translation of it.

I guess I'm just waiting for someone to complain about them not doing it in black and white. While it would ensure that you kept a low profile to the FCC in the terms of blood and violence, it would also ensure that nobody would watch it.

And with that I'll leave you with this most awesome google map. If you're so inclined to do your own Walking Dead road trip, you can use this google map as it has the locations where the comic has taken place thus far.
Posted by Booster Gold / Javier J. at 3:21 PM