Hi there. This is the Butter Jesus. It's a 62 foot tall statue of Jesus on the east side of interstate 75 at the Solid Rock Church, a 4000+ member Christian mega church near Monroe, Ohio. 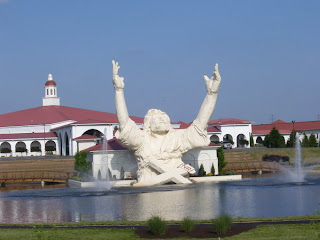 A funny thing happened the other day. You see, lightning from a crazy storm that passed through the area actually struck it and now it looks a lot like this.. 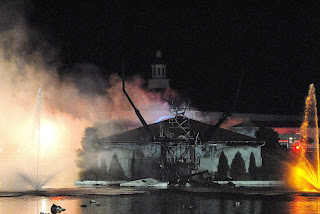 That's right. God literally struck this thing with lightning and burned it to the ground. Pretty fucking crazy, don't you think? Where is your god now?

As fun as that image is to watch from a still frame, I do sort of want to see it burn up in live action. Oh goodie, we have a Youtube video clip of Jesus getting burnt to a crisp.

But even with moving pictures and some crazy bitch saying that Jesus is on fire, it seems like I need a news story attached to things like this or you just wont believe my crazy bullshit. Here you go

MONROE – Lightning struck and ignited a fire late Monday that destroyed a 62-foot-tall statue of Jesus Christ with his arms stretched toward the skies, according to Monroe police.

“It burned to the ground. The whole statue is gone,” said Kim Peace, a police dispatcher.

The large “King of Kings” statue was a Butler County landmark since it was erected in 2004 outside Solid Rock Church, 904 N. Union Rd., along northbound Interstate 75 in Monroe just north of the Ohio 63 exit.

Fire crews were called to the church at 11:15 p.m. after several people phoned 911 to report the blaze as a severe thunderstorm swept through Greater Cincinnati, producing a spectacular lightning show, Peace said.

“The lightning was just amazing,” she said, wryly adding: “It was a lot of fun in here last night.”

How about we have some fun with Youtube Doubler for this bad boy? See how a tragedy can be turned into comedy? Welcome to my world.

The son of a bitch thing cost $500,000 and was funded entirely with donations. Ha! Hail Satan. Though I know this smug smile on my face is going to be wiped off when they rebuild it in about 3 days. Still, for the moment it feels good to look at that shit and just laugh.

Remember, this weekend is Father's day. Even if your dad is metal as fuck, you need to get him a gift.


Take your statue of my son, your only statue whom you love, and make of him a burnt offering! Though I shouldn't be to thoughtless here. How about you all post your favorite memory of the butter Jesus.

I once went to a county fair in rural northern Ohio as I was passing through and I got real sick after I ate way too many corn dogs and drank a couple of bad milkshakes. Seeing butter Jesus on the way forced me to pull over and puke my guts out on the grass. When I looked up, butter Jesus was there - Comforting me, assuring me..... Mocking me? I don't know, to be honest. But I do know that fucker is now just ashes to ashes.

So, just in case any of you at home are keeping score... 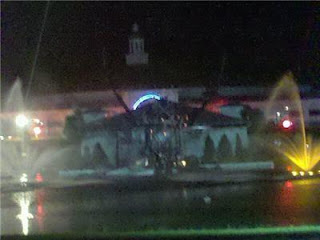