Just as many season ending episodes for the regular season finish airing and you're starting to feel like you have nothing left to watch just remember that summer is here. Yes, sure. You could go outside and actually enjoy the longer days (longest day being June 21st), but just remember Summer Burn Notice is here and really, that's the best Burn Notice.

It's basically not summer if I can't have Psych, Burn Notice and Royal Pains. Oh USA, you make summer awesome. You and bikini's. I don't even care that Monk is over because I never cared for Monk. It was dead weight to me and while it's true that Burn Notice is shallow, it's still entertaining. It's really the perfect popcorn show and for summer time, that fits the need perfectly.

So yes, I'm so excited that I'm sure Michael Westin is happy to dance for the occasion. So why don't you join me and take in the awesomeness that is Burn Notice. It's really the show that highlights how fun and enjoyable USA can be. And while you already know that season 4 of Burn Notice begins tonight, you may not know that Burn Notice has now been officially renewed for two additional seasons. That's right, you can count on Seasons 5 & 6 appearing on USA in 2011 and 2012!

This means we have more Burn Notice episodes coming up than we've already had aired! Isn't that some amazing news? This also means that the Florida filming department will have at least a couple more years of production to pay for their local workers. This is all even more information to dance about, So can we get a little dance Fiona?

So where are we in the show? In case you missed the marathon that USA was showing all of today and don't know where we last left off on burn notice, it's here:

International fugitive Simon is loose and Michael's on the run from the FBI for his role in Simon’s escape. When Simon confronts Michael and threatens to blow up a Miami Beach hotel, Michael must call on his friends and an old enemy to help him avoid disaster and put Simon back in the dark hole where he belongs.

And so we return to night with Burn Notice: The Prisoner Edition! But you know what, with good news like all this and the excitement that the new season is here, there has to come some bad news along with it.

Fox has decided not to release the third season of "Burn Notice" on Blu-ray according to the official press release for the upcoming DVD release on June 1st.

The move isn't surprising. Though one of cable's best reviewed and most popular shows over on the USA Network, the show is shot on Super 16mm (aside from the Miami flyover shots) rather than in HD which accounts for a rather grainy image. As a result the difference in quality between the broadcast SD and HD versions is less noticeable than most other shows.

Fox then shot itself in the foot by releasing a Blu-ray with one of the worst-reviewed video transfers in the format's history and charging $20 more for it over the DVD version. It thus came as no surprise that sales of the Blu-ray proved disappointing.

The show now joins the likes of "Prison Break," "Nip/Tuck," "Damages" and "Rescue Me" which all started to release seasons on Blu-ray and then stopped after poor sales.

It makes sense. I thought that season 2's Blu-ray was pretty piss poor in video quality. I wasn't complaining about the price because I get employee discounts, but still, this does make my collection seem a little odd. I have season 1 on DVD, season 2 on Blu-ray and now season 3 will have to be on DVD as well? Oh well. 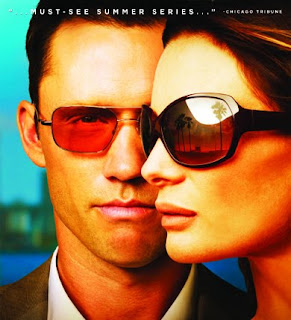 I look forward to this new episode wave of episodes. Yes, that's right. 8 episodes. That's how USA works. They order 16 episode seasons and then show 8, take a couple of months of a break and the come back for winter break. They're there when all the other networks abandon us for the vacation time. For that, I thank you USA. You make watching TV a pleasure.
Posted by Booster Gold / Javier J. at 2:33 PM