The World Cup - Bust Out Those Vibrators, Ladies

The World Cup - Bust Out Those Vibrators, Ladies

As you may have heard, it's Foot Ball season! Oh wait, let me rephrase that.. it's Futball season! And before you start hating on it, remember that the world cup stopped a civil war in the ivory coast in 2006. So see, this event is a very serious issue and has a lasting impact on the world as a whole. So why is it that something of this magnitude gets an ad campaign like this; 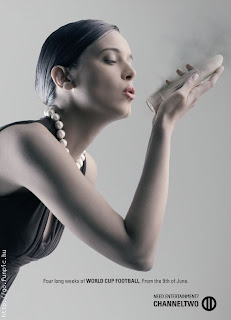 Hmmm. I guess that's some ad.

"Four long weeks of the menfolk doing manly things. Which you women should have no interest in... Warm up those vibrators ladies! Your man's got football fever!!!"

I think we all get that she is blowing off the dust from her toy to get it ready for some schlicking since her man wouldn't be husband-raping her every night now.

Perhaps the motor is smoking because she's wearing the damn thing out because she has a terrible husband/boyfriend who watches football all day instead of pounding her pigskin. Maybe they should have had her blowing the smoke of the non-sports-watching neighbor's dick just to hammer home the point. What about if she was German?

The World Cup in South Africa will attract more than just the 2.2 million tourists who have bought match tickets. Up to 100,000 prostitutes will enter the region this summer, an influx which will swell an already out of control industry where an estimated 50 per cent of sex workers are infected with HIV.

With the World Cup about to exacerbate this problem, the regulation and legalisation of which has been much discussed in the papers and politics in the last 12 months, The Independent Online spoke to Ellen Crabtree, 50, from Edinburgh, a VSO volunteer who has been helping sex workers in the region to develop alternative sources of income.

A former marketing manager for Scottish Widows, Crabtree says she “had a great lifestyle” but was “helping rich people get richer.” Since swapping her high flying lifestyle and moving to Johannesburg 18 months ago she has worked with current and former sex workers helping them to develop their literacy and IT skills, in particular helping 6 former prostitutes train as beauticians.

"A combination of arrogance and altruism led me to think maybe I could make a difference,” she says. Now working within the Special Services and Community Engagement team, with particular focus on the Community Care Centre, Crabtree is helping to offer meaningful and effective support for people infected and affected by HIV, whether it be helping to secure migrant documentation, legal consultation for vulnerable people.

Seems pretty clear that FIFA selected South Africa in order to cause a huge number of HIV infections of people from all over the world. Clever girl! First you don't allow no video replay, and now this? FIFA is EEEEVIL! And if you didn't believe me, check out this news story about how FIFA is blocking condom distribution...

Aids groups in South Africa have accused Fifa of banning the distribution of condoms at World Cup stadiums and other venues.

The Aids Consortium and other groups also criticized a block on the distribution of safe sex information at stadiums and fan parks, even though alcohol can be advertised.

South Africa has the world's largest number of HIV carriers, with an estimated 5.7 million people infected – about one in every five adults. There are around 1,400 new HIV infections every day and nearly 1,000 Aids deaths.

Then again, these sorts of things don't really matter to Americans, so why should anyone care. Almost 100 million Americans watch the super bowl every year. Something like 15 million watch the world cup final. Yup, it's a much smaller number. In fact, the cases of HIV beat that with ease!

I guess they really don't want to touch on that aspect of the South Africa problem, right? I mean.. their focus was more on if the infrastructure was well enough for the world cup to even be hosted there. Did they ever complete that gigantic overpass they started building in 1995? Nope! But they sure as hell found a use for it as they put a huge fucking Vuvuzela there that's going to get blasted whenever Bafana Bafana scores a goal. 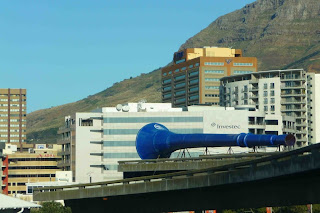 But let's move on to bigger issues.. like bees. South Africa must really have a bad bee problem since you can hear swarms of them over the game at any given time. Really making this sport a few more notches more dangerous than previously expected. Vuvuzela or swarms of bees?

What's a god damn Vuvuzela? Well it's a really annoying thing that sounds like a swarm of bees is invading the soccer game. You'll just have to take the word of this guy in the next video link here;

Oh yes, it's going to be a great World Cup. Hope to enjoy as many as the games as possible, given the fact that you'd have to wake up at the butt crack of dawn to enjoy.
Posted by Booster Gold / Javier J. at 3:03 AM