Well, despite fears that they wouldn't get this thing out for a few more weeks due to a bug switching from winter to spring, the new 2009 Calendar demo will be officially released tomorrow afternoon at a press conference. I've been actively seeking out any and all news related to the new calendar for five months now, and happened to get a leaked copy.

I'm pretty sure that this will be the best version yet. 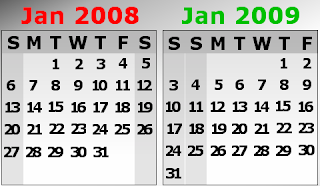 In previous years, the calendar has had the weekends separated by the week. Finally, after a lot of user feedback, they've combined Saturday and Sunday together. No more waiting all week just to get the second part of your weekend. I'll be happy that I can finally take a date on weekend vacations; it just wasn't feasible with only one day and then a week in between.

Seems they're really pushing the patriotic shit down our throats this year though with all the different days: veterans' day, flag day, memorial day, presidents' day, patriots day, independence day, etc. I guess nobody is too low to stoop to making a profit off 9-11. There have been calls to retire the day 9-11 and add a completely new date, but for now we're forced to remember the tragedy.

After the leap year experiment, it was decided that it just wasn't worth it. It posed a risk of triggering more blue moon situations. So they have axed the 29th day in February, back down to just 28. The theory behind 29 days in February is sound, but more work needs to be done on the algorithms. I know that the team in charge of it is still employed, so maybe we can hope to see it put back in at a later date when they've ironed out a few more of the bugs?

Despite rumors and speculation, this release failed to include any web 2.0 systems for including user generated content. It's only a matter of time, they can't fight this for much longer. Oh well, here's to next year.

They couldn't start the new year at the beginning of the week without making the new version incompatible with the old one, but that's been one of those things most of us have grown used to, and it hardly even seems to matter anymore.

In the event of the Apocalypse the calendar will probably stop working correctly. It does not have any provisions for the enforcement of dates in a Mad-Max style wasteland. Future releases may address this, but they're being pretty tight lipped about it.

Calendar v2009 will come included with the v2008 one second bug fixed. It should have never been an issue and the extra second was easily patched. With the beta release of Calendar v2009 being released means we can play around with it to see if it's the Calendar we want to use. Only downside is that we can't install and run the program till Thursday at midnight.

Concerns:
Calendar 2009 will be crafted from the finest materials, with high quality standards. I know that a few of you got to July and then noticed that your calendars became unreliable, but this year promises to be a much better suited to a year of use. My grandpa is still using his calendar from 1969, so I know the technology is out there to make a sturdy calendar that will last, and let's hope that there will be a return to that sort of quality this year.

You'll have to throw out your old calendars, they just wont work once you upgrade to this version. A lot of people I know just cut them in half and turn them over and use the pictures on the back, frame them or something. It's a good way to get a little extra use out of your old useless calendar.

I know a lot of people have been comparing the use of Gregorian Calendars vs Mayan ones. Just because Mayan ones have a sleek design, don't believe the lies in their ads to "Think Differently." Mayan calendars may not have to get new versions every year but you wont have any support after 2013.

Q: Why is Monday still on the calender? Nobody likes Monday. -LasagnaloverCat@yahoo.com

A: Excellent question LasagnaloverCat@yahoo.com. The reason why Monday is still on there is because the attempt to create a new beginning of the week with another S would only confuse matters.

Q: I heard that you had to lose a Saturday in March because of the economy, is this true? I notice you didn't mention that at all in your literature. If so it sickens me and you should really be ashamed. -JohnSmith@gmail.com

A: It is sadly true that we did have to lose a Saturday in March due to budget cuts. The pirating and illegal download of Calendars of years past left us with no other choice. If that Saturday in March is important to you, you may want to look into importing your calendar from Japan this year.

Q: Will you be continuing to support previous years' calendars? My company is still using Calendar 98. Will we have any backward-compatibility issues?

A: I'm afraid not. The only way to benefit and use Calendar 2009 dates is by upgrading your companies Calendar software. Perhaps you should talk to your bosses as we do provide lower business rates for software to companies looking to upgrade.

Q: Is this going to affect my sundial's Preferences? I just re-installed it with a shovel and donn't want to mess around with it.

A: Your sundial's software should still work as normal under your preference settings. Your dial may be off around spring and fall when the time changes, but it should not effect you more than normal.

So with all this out in the open, I'm looking forward to the new Calendar v2009. I used v2008 for a whole year and while it had some bumps in the road, it still worked great all year round in telling me what day it was. Made planning and organizing days a breeze. Here's hoping v2009 is great for you as well.