It Is Probably Best To Not Fuck Racoons

It Is Probably Best To Not Fuck Racoons

Toothy raccoon bit off manhood
A FEISTY raccoon has bitten off a pervert’s PENIS as he was trying to rape the animal.

Alexander Kirilov, 44, was on a drunken weekend with pals when he leapt on the terrified – but toothy – fur ball.

“When I saw the raccoon I thought I’d have some fun,” he told stunned casualty surgeons in Moscow.

“He’s been told they can get things working again but they can’t sew back on what the raccoon bit off," said a pal.

“That’s gone forever so there isn’t going to be much for them to work with."

I can't quite work out why the word 'PENIS' is capitalized in the first line of the story, but I wish it was a standard part of journalism all the same. Moving to the meat and potatoes of the story. That was a real dick move on his part and the raccoon's.

I thought I was stupid for approaching and petting a group of three or four day old racoons last summer when I was drunk, but I guess not. Nothing happened to me at all, but then I wasn't trying to fuck them. 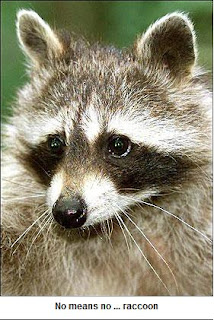 If you try to fuck a raccoon, you pretty much deserve anything that animal is going to do to you. Why didn't he just fuck a goat? The youth of today! The worst part will likely be the rabies shots. And the not having a dick thing too..

It takes a special person to get drunk, see a furry animal with heaps of teeth and think to himself, "Wow that animal looks pretty damn fine, I might fuck it!". I wonder if I actually know someone who has these thoughts. People think beer is the go-to guy for promiscuity. Vodka actually puts forth the extra 'oomph' needed to break the species barrier.

This story is funny and all, but it's from The Sun? They're a terrible news source. God dammit my hate for that paper can't be expressed enough. Look at the way they write the story out? Here's a few select quotes.

“That’s gone forever so there isn’t going to be much for them to work with."

This is the best part. Maybe since he's already proven himself such a figurative cunt, the surgeons can go all the way and finish the job the raccoon started and he can fulfill his natural destiny as a twat.

"Now Russian plastic surgeons are trying to restore his mangled manhood."
But the real question is should they? 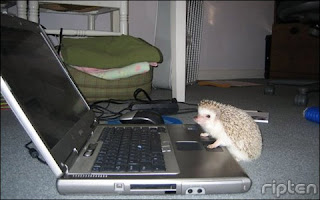 Searching the net for new tail...

If anyone ever tries to argue that Russia is NOT a backwards country, I shall immediately point them to this blog. Thank you for that.

And who wants to fuck a RACCOON?? They're vicious! Dude deserves to lose his cock.

That last picture is priceless.