Monopoly Is America's Favorite Board Game.

Monopoly Is America's Favorite Board Game.

And it's only fitting. Oh boy let's play a game where we pretend to be real estate moguls. it would be even more fun if that game was almost entirely chance and better still, if you win it's because you've pushed every other player into abject poverty

I don't ever remember the last time I've ever finished a game with a winner officially declared. It's a war of attrition at best, an act of frustration and accusations of bank robbing at worse. To be perfectly honest I rob the bank. At least two or three times in a given game. In real life, if and only if you're rich, you can rob the bank while people are looking. Not so in this Parker Brothers game. 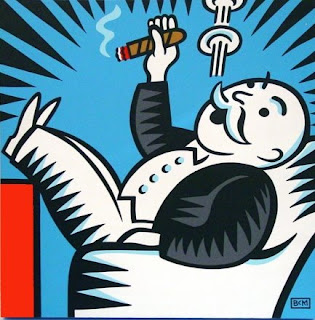 I think the best way to play is that if you get caught robbing the bank/another player you go to jail, and you have to pay it back in double. But if nobody notices you've stolen anything in three rolls' time, you get away with it.

There needs to be more blood thirst in the game. You have to play with 3 or more people and then the goal is to make a deal with someone else and fuck over the rest and then fuck over that guy by stealing from the bank and that is the only truly capitalist way to play.

Which leads me to another question, I never understood why we had to pay to stay at the hotel why couldn't I just sift through the garbage like a real person would? What's the deal with the train stations also? So I pay you a fee and I'm not taken anywhere different? What, am I paying to sleep in the terminal?

you have to play with 3 or more people and then the goal is to make a deal with someone else and fuck over the rest and then fuck over that guy by stealing from the bank and that is the only truly capitalist way to play. Isn't it the American dream of independence in cardboard and dice form

I was airing my issues with Monopoly to a friend and he told me that the last time he lost was because he traded half of his properties for a blow job. But then again, any game is good when you toss in stripping or sex into the mix. So that's a no brainer.

I think the only positive for the game was being able to burn the fake banknotes to light my victory cigar. But that would require actually winning at the game. A feat that seems more and more impossible. They also replaced the paper money with a big dumb credit card thing. Sure, I guess that teaches a kid not to carry cash around, but it also teaches them how to stretch a credit card. If you want to make it more true to life how about you update the game with a bailout card or a high office window to jump out of once you hit the bankrupt stage. Forget picking yourself up by your own bootstraps through the game.

Unlike other games where it's clearly all about having fun. GUESS WHO is a pretty accurate portrayal of the election cycle and Hungry Hungry Hippos is nothing more than a symbol of the American excess, obese creatures competing to cram the most food into their gaping maws. In fact, the more I think about it, Frisbee is my favorite game because there's no teams or scores so everybody wins. 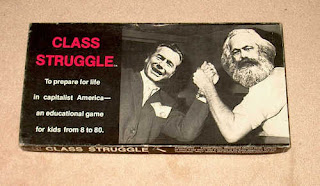 a REAL Board Game!

As bad as monopoly and the rest of those games are, it's nowhere near as bad as the shitfest that is LIFE. Life is terrible. Not the actual one I'm living. No, that's actually going pretty well right now. I mean the board game LIFE is actually the most boring game I've ever played. It's really lame as well. I think in LIFE you make three decisions the entire game and the rest is chance. It's accurate at least on that aspect.

LIFE. It's the most laughable part is how life has been sanitized. I remember when I was a kid my parents had an old version and if you were rich you got to live in a nice place whereas if you were poor as shit you had to go to a country home. meanwhile in this new one you have fucking stock investments and everyone ends up in the same swanky place when they retire. Even the cereal is more true to life. If left out without properly covering it, it turns to shit and sometimes you have to eat it cause you don't have anything else eat.
Posted by Booster Gold / Javier J. at 10:32 AM