I grew up in East L.A. with Dodger Stadium always in the background. I could see both Downtown and just a bit over to the right there was always Dodger Stadium. During the summer it would be amazing to see the lights of the field create this glow over the stadium. So I will now and forever more have an attachment to the Dodgers.

Going on as long as I could remember I have been a Dodger fan it does bother me that this last season was the first one in 20 years that we even won a game in the post season. So when news comes out that the Dodgers are reaffirming their humble offer by putting it back on the table, it still feels like a slap to the face since it's not what Manny was asking for. Even worse so is that there's still no change in the mood in Dodger stadium on this issue. So I'm asking that Ned gets off his ass and while there's still time, signs Manny already! 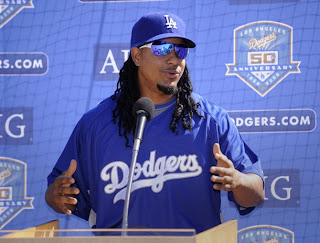 Let's lay out the facts. Before the Red Sox wanted to get rid of Manny Ramirez so badly, the Dodgers were at best a 500 team in the worse division where they were roughly first or in second place. Then National League West is simply that bad. Once Manny came to Los Angeles he changed the team around to being a post season contender. And how much did they pay for him? Not a god damn cent. The RedSox wanted to get rid of him that badly. The Dodgers were only three games away from the World Series. The first time in the last 20 years.

Three months after the World Series, one where the team that beat the Dodgers won and only a month away from spring training, Manny still doesn't have a contract anywhere. The Dodgers offered him 45 million for two years and that wasn't what he was looking for and the Dodgers pulled the offer off the table. Thus far no team has gone after him. The Dodgers need to step up to the plate and sweeten the deal a little more and get him now.

After that amazing season last year it would be foolish not to. Dodger fans took to Manny so well. Merchandise was sold of his in the boat load. Shirts, wigs, and anything else you could think of. They must have made an easy 10 million off the products alone. Not only that but the Dodgers, for the first time in a long time were so compelling. You had to watch them every single day or you'd be out of the loop and missing out on something amazing. 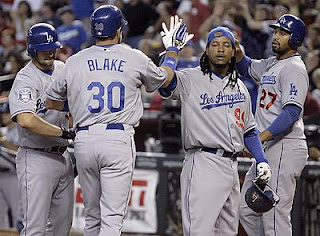 The dodgers pull in a crowd of 4 million people a year and the average amount spent per person is $17 on food/drinks/parking. They're on their way to meeting and beating their season ticket sales from last year and while they are doing it even without Manny signing, a lot of those buyers are asking if there's any progress on that. It's pretty clear. The Dodgers Need Manny Back!

I'm guessing that the only reason why anyone is hesitant to sign Manny is because he had a very poor track record with the Red Sox. They did not get along at all and he didn't take playing serious there. When he came to Los Angeles he was a champ and a model citizen. Cut his hair to get along with the dress code of the club and was great all around. So there really shouldn't be a reason why the Dodgers wouldn't want him back.....

Well, besides the fact that he wants a four year contract. Yeah, that's the sticking point. Four years is a bit much. Especially with someone who would be in their 40's when they are in the contract. That's "Take him out back and put him out of his misery" age for a baseball player. 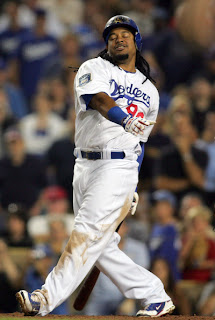 But the Dodgers offer of 45 million for two years is a bit low balling. Can we find a middle ground here? How about tossing in an option for a fourth year depending on performance? But for the love of god, give this man a three year contract. Make it happen. You got rid of Andrew Jones, you can make room for a GOOD player.

While Manny might not be a given at Dodger Stadium, Vin Scully is and I wouldn't have it any other way. Recently he was named the Top sportscaster of All-time. And that's for good reason. He's been the voice of Dodger baseball for the past 60 years.

He was there with them when they were still the Brooklyn Dodgers bumming around in New York and he's been here with us ever since. Forever part of history as I'm sure we won't go too long before seeing the footage of him calling the Kirk Gibson home run or some of the other plays that simply knocked our socks off. 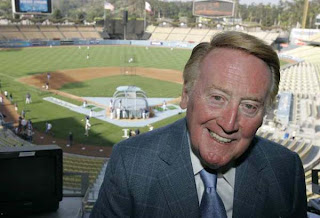 I'm a bit scared, to tell you the truth. For all my life he has been the soundtrack of summer. You turn on the radio and sure enough, you'll hear his voice during those nice cool summer days. After Chick Hearn, I wondered when Vin Scully would be taken from gracing the airwaves and it has been a constant fear ever since. So hang in there, Vinny, your summer days aren't over year and hopefully wont be any time soon.

Last year I finally had the majority of my seats behind home plate on the field level and during the seventh inning stretch it was amazing to look up and see Vin Scully standing in his booth area singing along with the crowd. Don't take him away, Sports gods. Don't you dare take him away anytime soon!
Posted by Booster Gold / Javier J. at 3:15 PM