While most other news journalist are covering Obama dropping his blackberry, I'll be covering the big ticket issues. Like the Inauguration. Only one problem. I'm not in Washington right now. Nope, I did not get my invitation. 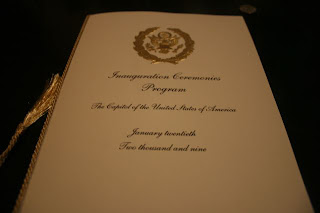 This was NOT in the mail for me.

How dare they! Don't they know I'm a well respected member of the press Some guy with a blog! I should be right there! I should be seeing history in the making with my bottle of Hennessy in one hand and another alcoholic beverage in the other! I've followed this man for a long time now. I've watched him eat, I've seen him want to ban pianos. Hell, I even knew him when the undecided voters didn't! So you're telling me that I get snubbed for the inauguration? Talk about elitism!

But have no worries. I sneaked in through the back and am providing you LIVE INAUGURATION COVERAGE! Well, till secret service comes in and beats the ever living shit out of my ass. I figure that if everyone else is on the Obama wagon, I might as well hop on board. Where's my lakers Obama flag, cause he's number 1 44! Wooooooooo

So let's connect to our live feed from the inauguration... 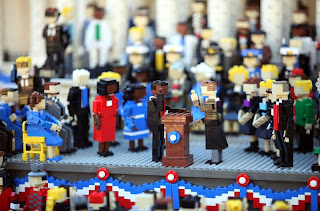 Wait, that's not it. Not sure why the reception was so bad? Maybe I should have got that digital converter that they keep yapping about on the television. You can pry analog television out of my cold dead hand! Let's see if I can get a better look from that other building. 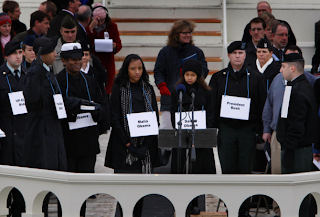 Well, I guess they look a little different, but that's their names on the name tags. 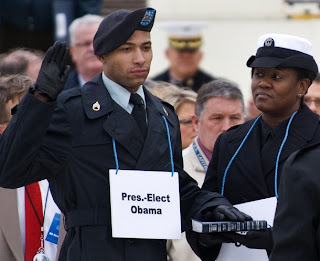 Holy Obama! Is that a Holy Bible? 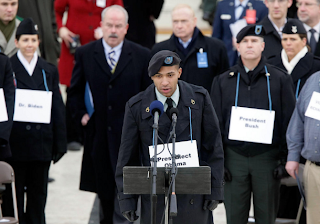 Giving a speech that will trump MLK's I have a Dream speech. 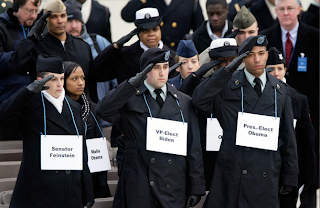 Look at the saluting their new President 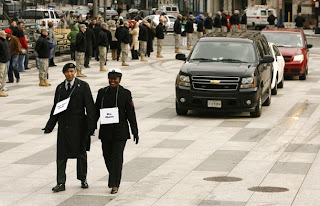 The First Family walking down the street. 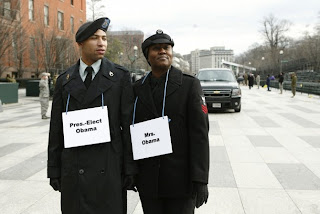 Must be looking around the neighborhood. I know I always look around when I move.

Seriously though. Why the fuck are you reading my blog when you should be watching the inauguration. It's not like it isn't on many different websites or anything. Don't know of any?
Inaugural Senate DOT GOV
Inauguration Day Broadcast
Some telegraph British place

There's no shortage of places to watch this. Shit, it's even on Hulu..

Now everyone thank Paul Blart: Mallcop since it's being brought to us by that terrible terrible film. On that note, let's take another look at what this inauguration is doing for D.C. Besides large masses of people and backed up traffic. It's not like D.C. was a traffic free zone anyway. 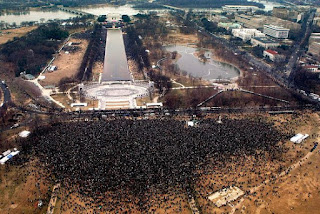 Whys this a pickpockets wet dream?
Plenty of Change. ba-da-zing! 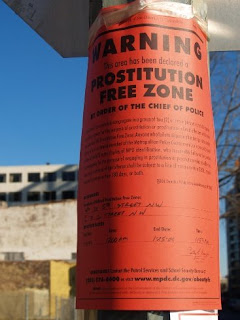 It seems that Obama's Presidencey is already having a positive effect. Besides all the trinkets that are making millions for Gas station owners and novelty shops, it seems that D.C.'s own hooker and drug dealer communities are benefiting from number 44

A brief phone survey yesterday of D.C.-area hookers found on Craigslist revealed that Barack Obama's inauguration is inspiring great hopes — for their business. A pair who work together expect 30 clients before Wednesday, all paying $200 a pop. Meeka, 21, a “sexy southern belle, new to town,” has come into the city specially for the festivities. “I'm busy over the weekend,” she told us. “I could make time for you, though.” Karina, 26, traveled five hours to get here, and was already “pretty booked up.”

All of the women, who charge between $100 and $300 per hour, voted for Obama. Charlie, who implores clients to “come start my engine, bad boy,” said she would even provide her services to Barack Obama, despite potential costs to his nascent presidency. Lei, a male prostitute, spoke to us at his plush apartment in an upscale neighborhood. “I actually just finished with a client who was from out of town, the South, I think,” the youthful-looking 38-year-old — who is from an Islamic country, and was in an arranged marriage for eight years before coming out of the closet — told us. “I hope the inauguration will bring more business. If it's guys here by themselves on business, then it will.”

Obama's inauguration might also make history for D.C. cocaine dealers — although there is no basis to the rumor that some are dyeing their product black. Over five days, one 29-year-old expects to earn cash in the high five figures from out-of-towners, not least because bars are open until 5 a.m. and there are a few hundred parties. The dealer, who grew up moshing to D.C. punk, laid out $3,000 to stock up because he plans on moving “serious weight.” On Saturday, lounging in the back room of the Rock N Roll Hotel nightclub, he slipped a bag of coke into the hands of a venerable fortysomething European reporter. “I’ve had people calling me about this for weeks,” the dealer says, as the reporter hands him $60. “I just sold out. I gotta re-up.” 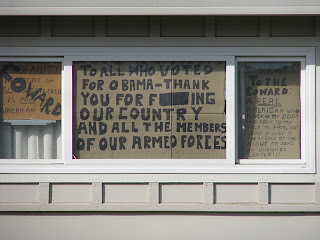 You should take comfort in those hookers and drug dealers in the greater D.C. area are more than pleased with the passing of the torch. Now that's a change into something more comfortable. Now that President Elect Obama is just President Obama, let's see that magical altering of the last eight years! Close up Gitmo! I don't want to end up there when they find me perched in this empty closed off Washington D.C. building.
Posted by Booster Gold / Javier J. at 9:00 AM

I like the rhyming with colors part, and the stumbling of the oath by B.O. or oaf as Feinstein said.