Many of you don't realize how close we were to total channel blackout on your local cable company at the end of 2008. If you only knew how close you were to losing the ability to watch South Park or Sponge bob while you eat your cereal, you pot head! Do you not realize how close they were to pushing the button? All would be lost if that were to happen... Well, by all I mean a couple of cable channels. 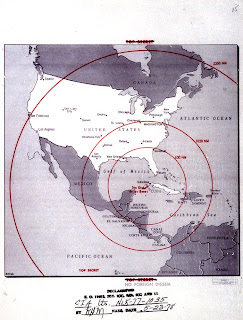 The Airwaves are in danger!

Spongebob Squarepants," "Dora the Explorer" and Jon Stewart soon might be pulled off Time Warner Cable systems in Los Angeles and around the country if the cable operator and Viacom Inc. cannot reach a new contract before midnight tomorrow. The move could knock Viacom's cable channels, which include Nickelodeon, MTV, VH1 and Comedy Central off nearly 2 million households in Los Angeles.

"We've been attempting to negotiate in good faith but they seem to taken it to the brink. Unfortunately, we are now at an impasse," said Philippe Dauman, chief executive of Viacom Inc. "It's unfortunate for all of our viewers should they lose the ability to watch our programming."

Viacom's license agreement with Time Warner Cable, which serves 12.3 million homes in the U.S., is set to expire at midnight Wednesday. If no deal is reached, Time Warner must take the Viacom channels off its cable systems and use alternative programming instead.

"Advertising revenue stinks so they are looking to stick our customers for the difference," said Alex Dudley, Time Warner Cable spokesman. "They are holding our customers hostage for a bunch of networks with sagging ratings and only one or two good channels. We have to hold the line for our customers."

Viacom said that it is asking for an increase of about 25 cents per month for the package of channels, which comes to about $3 a year per customer. Time Warner said that could trigger cable networks to demand higher fees as well, which ultimately could add as much $30 a year to a subscribers' bill.

This wouldn't be the first time that a cable channel has gone dark. It is not unusual for cable networks and cable system operators to pull or block programming during difficult negotiations. In 2004, for example, Viacom's cable channels disappeared from EchoStar's Dish Network for two days while both sides quarelled over the terms of a new contract. Earlier, Time Warner blocked ABC from its cable systems in New York during a breakdown in contract negotiations with parent company Disney involving carriage of its cable networks such as the Disney Channel and Toon Disney.

But the high-stakes dispute could prove to be different this time around because much of Viacom's programming, including Comedy Central's John Stewart and Steven Colbert, is now available free online. Moreover, Viacom no longer owns CBS, so it can't threaten to pull the network off cable systems on the eve of NFL playoffs, as leverage in negotiations. The hard-nosed tactics also come at a time when Viacom's stock is trading at historic lows and the company's controlling shareholder, Sumner Redstone, is facing hard choices in refinacing the debt of his holding company, National Amusements Inc.

We were very close to losing VH1, MTV, Nick and Comedy Central. My first real question was how am I gonna watch MadTV reruns? But then again I would rather watch the hills than see MadTV. Now that Avatar is over, who the fuck cares about Nick. To be honest, removing that list of channels would actually making me happy, right up until comedy central. How would I get my Daily Show fix? Well, there's always hulu.com for that.

In this crisis both companies were flexing their fire power tossing out bullet points on why the other side sucks.

We are negotiating earnestly, honestly and fairly with MTV Networks, but so far have been unable to reach an agreement or get an extension.

MTV Networks may pull these channels from your lineup on January 1st.

• MTV Networks wants our customers to pay millions more. They are currently demanding price increases that are nearly triple the rate of increase under our current agreement. These increases would be excessive even in a strong economy, but given the current conditions, it’s simply not fair to our customers.

• MTV’s demands are outrageous and would force our customers to pay millions of dollars more per year. MTV’s networks are not worth so much more today than they were yesterday, especially given the fact that their ratings are mostly declining in recent years.

• We’ve successfully negotiated hundreds of programming agreements with other cable networks, many within the last few months. Our hope is that we will come to an agreement with MTV Networks that is fair to our customers.

Viacom is answering back with:

The move by Time Warner Cable to force such channels as Nickelodeon, COMEDY CENTRAL and MTV off the air is another example of a cable company overreaching for profit at the expense of its viewers.

The renewal we are seeking is reasonable and modest relative to the profits TWC enjoys from our networks. We have asked for an increase of less than 25 cents per month, per subscriber, which adds up to less than a penny per day for all 19 of MTV Networks' channels.

We make this request because TWC has so greatly undervalued our channels for so long. Americans spend more than 20% of their TV viewing time watching our networks, yet our fees amount to less than 2.5% of what Time Warner generates from their average customer.

Throughout the country, we have negotiated equitable license agreement renewals, or are in the final stages of renewals, with virtually every cable and satellite carrier. Nevertheless, Time Warner Cable has dismissed our efforts at a fair compromise and has effectively chosen to deny its customers some of the most popular TV shows on the air.

As a result, we are sorry to say that for Time Warner Cable customers our networks will go dark as of 12:01 on January 1st, denying Time Warner customers shows like Dora the Explorer, SpongeBob SquarePants, The Daily Show with Jon Stewart, The Colbert Report, and The Hills.

Ultimately, however, if Nickelodeon, COMEDY CENTRAL, MTV and the rest of our programming is discontinued -- over less than a penny per day -- we believe viewers will see this behavior by their cable company as outrageous. Time Warner Cable subscribers who are being handed a January 1st $3 monthly increase in Raleigh, Orange County, Los Angeles, and New York City are simultaneously facing the removal of beloved shows across 19 channels.

We find it a shame that Time Warner Cable remains unreasonable at this time. We hope its leadership will have a change of heart and will seek to negotiate a fair renewal agreement.

Viacom said that it is asking for an increase of about 25 cents per month for the package of channels, which comes to about $3 a year per customer. Time Warner said that could trigger cable networks to demand higher fees as well, which ultimately could add as much $30 a year to a subscribers' bill. But this is Time Warner. So Fuck Time Warner.

They bought everyone out around here in the LA area (as I'm sure you know), then promptly:
Fired everyone they could
Outsourced everyone they still needed, so they could fire them too
Made a big blitz about being the "same old service"
Promptly started raising rates
Promptly started being even worse, in the service department, than ComCast which is saying something
Generally become big steaming piles of useless shit.

We need more anti-monopoly laws and Time Warner and everyone associated with it needs to rot in hell. This crisis would have been one more reason to cancel my overpriced crappy cable service. The internet connection goes out at least once a week, sometimes for an entire day at a time. My 9meg downstream connection is more like 3megs down even in the middle of the night when no one in the area would be awake, let alone downloading music and illegal software.

Time Warner and Viacom at the 11th hour

Just when the world... or at the very least those dumb enough to stay with our abusive husband, Time Warner Cable, thought it was all going to be over and Comedy Central would be lost we find out that the button wasn't pushed. There was an 11th hour miracle

Viacom and Time Warner come to a deal.

LOS ANGELES (AP) — Time Warner Cable Inc. says it has reached a deal with Viacom Inc. on carriage fees, avoiding a blackout of 19 cable channels including MTV and Comedy Central.

The two sides, citing disagreement over fee hikes, had threatened a damaging blackout at midnight that would have cut off shows such as "SpongeBob SquarePants" and "The Colbert Report" to about 15.7 million subscribers.

Shortly after agreeing to extend a midnight deadline by an hour, Time Warner Cable spokesman Alex Dudley said the sides agreed on a new contract.

Details of the deal were not immediately available. He almost lost out on Futurama reruns

We're saved from having to not be able to watch Charmed School or Rock of Love. We dodged the bullet of not having the luck of seeing VH1's wacky take on the 70's, 80's and 90's. Least we forget the 2000's. I am sure I will understand those "negotiations" on my next month's cable bill. So tell your children and their grand children about this epic crisis that almost robbed you of your guilty TV pleasures. And by you I mean all those like myself who are still dumb enough to stay with Time Warner. Stupid ass Road Runner.
Posted by Booster Gold / Javier J. at 10:11 AM