Conversations With The Dead: Asking My Ouija Board Things For You

Conversations With The Dead: Asking My Ouija Board Things For You

So here's the deal. It's not really an Ouija Board. More accurately, a Buffy marketing tie in product. While it's not a Hellboy Talking Ouija Board, I'm sure it'll be just as good in conversing with the dead. Without the need of pulling the person out of heaven, I can only imagine that this form of communicating with the dead will avoid said spirit from being bitchy for a half of season. 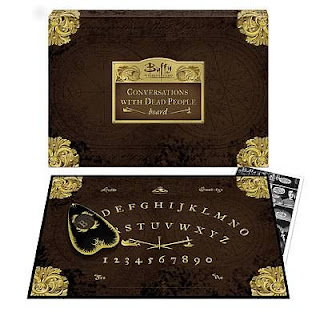 Reach out and touch the dead

While I have this party line to the afterlife I might as well put it to good use and get some answers! So if you readers want you can send in your questions for all those spooky spirits. Who knows what will answer your call. Be it a ghost from your past or just the cast of one of Joss Whedon's canceled projects? One can only guess. So send your questions to me and I'll answer them

My only rule is this: Silly/Mundane questions only. I don't want to be responsible for any perceived spookiness or bad decisions. Whatever the spirits tell you in this are not my responsibility. So nothing like, "Do I have cancer?" or "When will I die?" or "Should I dump my girlfriend?" and most of all not "Should I go on that chainsaw killing spree I've been heavily considering?"

NONE OF THOSE! Since I don't have your e-mails, I've taken the liberty of getting request from various people on instant messenger. By request, I mean I bugged random strangers and they were so confused that I didn't ask for A/S/L that they were curious as to what I was selling. So I present to you some questions to the dead! Let the power of a board game compel you!

BOLD are questions, NORMAL is answers and Red is my little snide comments on them.

Am I eternally cursed for using my old Ouija board as a doormat?

What will I name my first child?

The real question is how will you say it and will it look good with "Palin" behind it?

Who will be the first celebrity to die in 2009?

How many licks does it take to get to the center of a tootsie roll pop?

Oh Buffy Talking Board, can you tell me if I will ever find true happiness?

I'm thinking this means it's time for a BBQ!

What's the deal with corn nuts? I mean is it corn or is it a nut?

Where does the tomb of Alexander the Great lie?

What happens when an unstoppable force hits an immovable object?

Ok, at this point I'm starting to get a little creeped out. Not from the board, but from the random internet conversations...

Given the legal troubles it is in, will the Watchmen movie be released on March 9th, 2009 as scheduled?

Who wrote the book of love?

Where have all the cowboys gone?

The spirit must have seen too much Broke Back Mountain

Why do fools fall in love?

Who's going to win the Super Bowl this year?

God damn it, 40-1 odds for the Cardinals... I should have placed that bet in Vegas.

Well, that makes sense. I figured they just tasted like snozberries.

If I get that screenplay written by March, will it sell by December?

Looks like you're stuck waiting tables for a while there, buddy.

Is there an afterlife?

Ok.. that was kind of creepy. Not the aim conversation but the answer.

Will I lose 25 pounds this year?

God damn you afterlife people, I know how much torture it is to try to lose that last few pounds!

Is Papa Smurf a pedophile?

Should I ask her out?

Awwww, that's sweet. It's always nice to know that your dating life is approved by the dead.

Ok, I'll leave it on a high note. I don't want the demons to consume my soul. Then again, that's not much of a threat since the thing is called CONVERSATIONS and not DEMONS EAT YOUR FUCKIN' SOUL! or anything like that. Keep those questions coming folks. I'm tired of using AIM to get questions from random people. SO SEND ME YOUR QUESTIONS... FOR THE DEAD!
Posted by Booster Gold / Javier J. at 2:22 PM

Not bad, do you have any more?