Twittering Across The Internet

Twittering Across The Internet

I may not be as "hip" with the web 2.0 crowd but I do consider myself one that is able to judge how much something is worth. So when I'm told that Twitter turned down a 250 million offer I was left dumbstruck

Twitter, which just recently turned down a half billion dollar acquisition offer from Facebook (albeit to be paid mostly with Facebook stock), is dipping back into the venture capital market, we've heard from a source with knowledge of the deal. They've signed a term sheet with at least one venture fund to raise a new round at a $250 million valuation. We are still gathering information on how much they're raising and from whom.

I mean, do you know what twitter is? Seriously. All "Social Media" and "web 2.0" aside, it's just a facebook or Myspace status update without all the features. Why do people think anyone else cares what they are doing every minute. Does anyone actually read blogs or twitter or whatever other then the people who wrote them. I'm pretty sure the click count for this very blog is small. But at least this provides content... well, something resembling content at the very least. 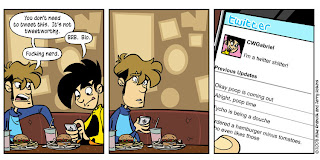 Is their ad revenue seriously enough to make them worth $250,000,000? Actually, nope. Not at all. At the current time there's no ads. Twitter apparently hasn't even got a plan for making money. They haven't even figured out how to monetize it, how the fuck can they turn down a quarter billion dollars?

If I ever invented *anything* that resulted in me being offered $100m plus $400m worth of any stock, I would sell before you could say twitter. I really, really don't understand why people would turn down these huge offers when stuff like this can disappear as fast as it popped up. Take Napster for example. It just about had monopoly back in the day, now almost no one uses it for anything.

Even if the $400,000,000 worth was in Facebook stock. They should have took it and ran. Even if it's just facebook.... stock? hee hee. To be honest, i do kinda need to diversity my portfolio with xanga and myspace stock. 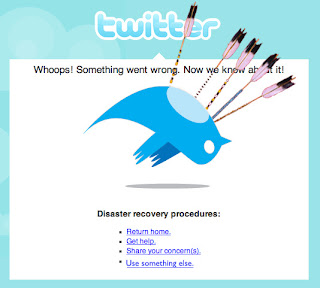 It seems like a great way to capitalize on the Stickam / Myspace "Social networking = popularity" generation the internet seems to have spawned. Nowadays everything's about "me", what better than a site dedicated to what a person is doing at any time for those types of people?

I know what you're thinking, "Its what all the kids are doing. Why don't you stop hating GRANDPA." Well you know what. I just got a phone with large number buttons on it, cause I must be old. Nah, I get it. You kids like giving your status on the minute by minute bases. This whole blog thing must be something crazy to you kids. More than 140 characters to express yourself? I must be crazy!

The big problem with Twitter and its ilk is that the user base is exactly the kind that will jump ship the moment it starts costing them real money to use, not to mention the tech-savvy crowd are exactly the sort of people who would waste no time at all in bringing out a free alternative - at which point the next chapter in the Twitter life story then becomes Napster redux. 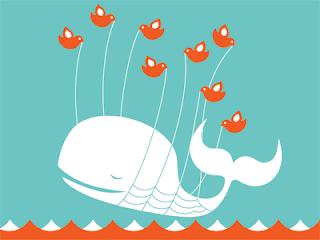 This whale needs to be harpooned

It's also a money pit of servers that go down at the slightest provocation, and doesn't generate any revenue. $250 mil is rampant speculation that someday, somehow, they'll figure out how to monetize it. Which they haven't in almost 3 years. Maybe they should take the money and buy servers that don't shit the bed every 5 minutes posted one minute ago from twitteriffic

You're going to tell me that Google doesn't charge for their services and yet still "magically" makes money. But then I'll correct you when I tell you that Google rakes in massive piles of money licensing their search engine technology, various APIs, advertising, etc. Twitter is an equivalent to "multiplayer notepad".

But get it straight, it’s Twittr not Twitter. I mean really, is it that hard to drop the last vowel and put the r right next to t - Posted from the bathroom