Here's a little remix version of whatever is a sort of parody song of others using GoT references.


I mean, it seems like it's topical now that THe World of Ice and Fire, a guide to Westeros is popping up in bookstores. Now you can find


The excerpt deals with Aegon the Conqueror and his conquest of Westeros, and particularly with all the fools who didn't just roll over when Aegon decided to unite the Seven Kingdoms under his rule. Here's a taste:

The Westeros of Aegon's youth was divided into seven quarrelsome kingdoms, and there was hardly a time when two or three of these kingdoms were not at war with one another. The vast, cold, stony North was ruled by the Starks of Winterfell. In the deserts of Dorne, the Martell princes held sway. The gold-rich westerlands were ruled by the Lannisters of Casterly Rock, the fertile Reach by the Gardeners of Highgarden. The Vale, the Fingers, and the Mountains of the Moon belonged to House Arryn . . . but the most belligerent kings of Aegon's time were the two whose realms lay closest to Dragonstone, Harren the Black and Argilac the Arrogant.

Well then, we may not have a new book to read in the story of the current happenings in Westeros, but we can enjoy a little history. Nothing beats history!

But you know, I wouldn't mind if she showed up to mine. Just saying. I mean, it would make sense that she would try to ruin mine, but let's face it. Mine seems to get ruined some way or another without the help of Katy.


I chuckled
Posted by Booster Gold / Javier J. at 1:41 PM No comments:

Kogi truck owner Roy Choi shows us a little trick you could do with chicken, some crushed up Oreos and late night cravings.

Alton Brown is one of my heroes. Mainly because I fucking love science and he taught me how to cook using it. So in this instance he provides some helpful advice on what to do with making your mustard life a little easier.

Okay, this just put a smile on my face.

Damn, this film is looking so damn good.

Trader Sam's is tucked away in the Disney Hotel area of Downtown Disney. It's a bit of a secret in that it's not that crowded compared to the rest of the area. Add to that, it's a true to form tiki joint that has some of the best tiki drinks and tiki experience you could ever ask for.

It's a bit of my home away from home and if I have an annual pass on a given year, you know I will be stopping by here after I dealt with the park madness. Ol' Ron knows how to take good care of you.
Posted by Booster Gold / Javier J. at 8:13 PM No comments:

So this happened on a plane with people on it and all that jazz.

I'm not one to pander to advertisements. Sure, I watch MadMen, but ads are something I seem to not watch many of given my viewing tactics of just simply watching streamed stuff.

In any case, I did think this ad was pretty fucking funny and a nice nod to those old science shows. Reminds me very much like LOOK AROUND YOU

Since you probably don't want to be at that trend-setter hipsterville land of overheating and tons of alcohol Coachella. Here's a little piece brought to your comfort or your computer.

This is going to be pretty much obscene, but you know what, fuck it. with Easter being such a religious hijacked holiday, we need to get it back to the roots of it being a sign of fertility and procreation. And you know what, nothing says that more than this little video of Kate Upton doing what she does best - Being damn sexy

These Easter Bunnies will fuck your shit up and haunt you in your sleep. 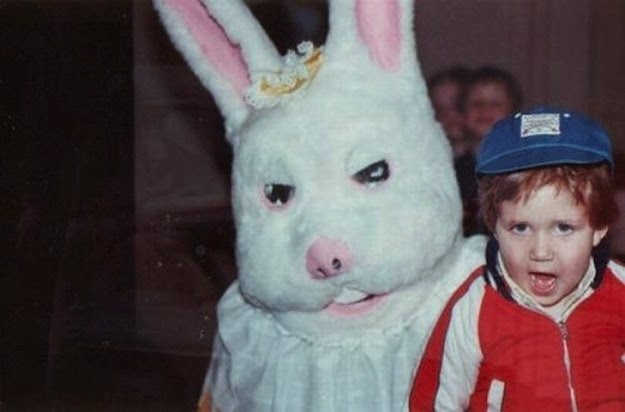 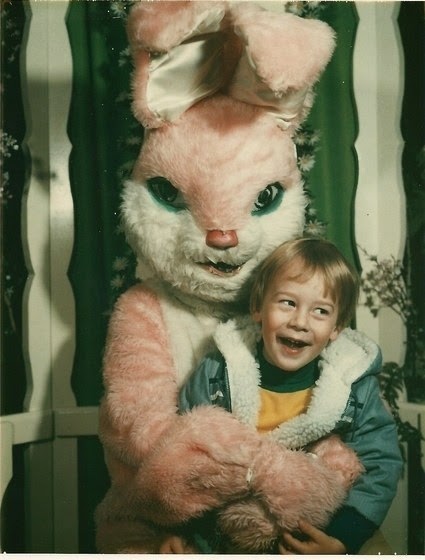 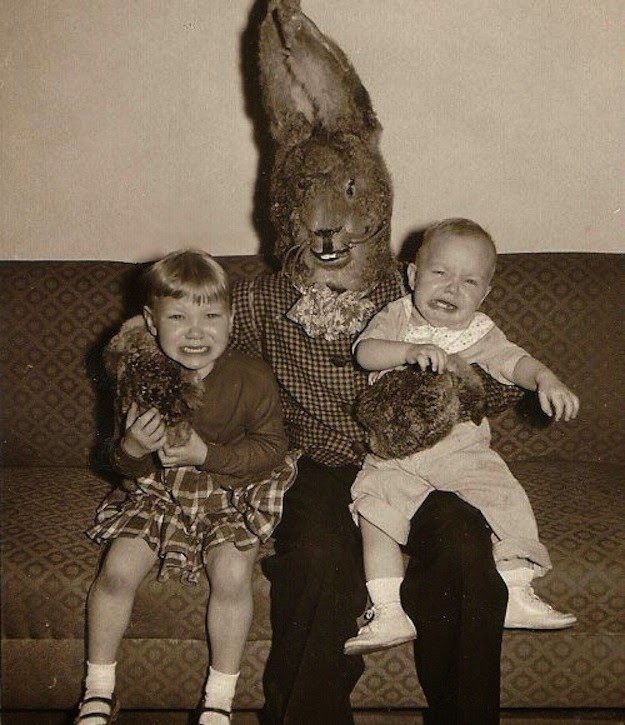 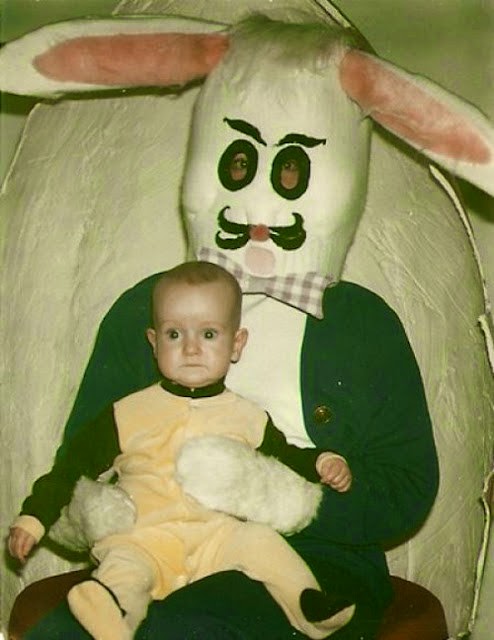 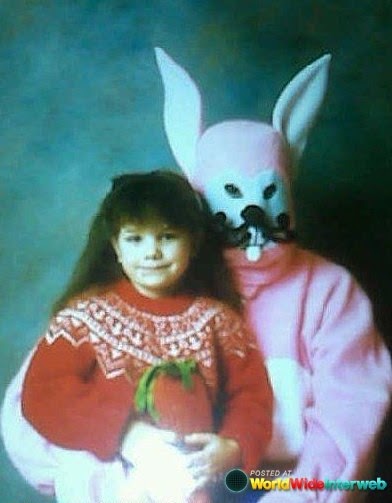 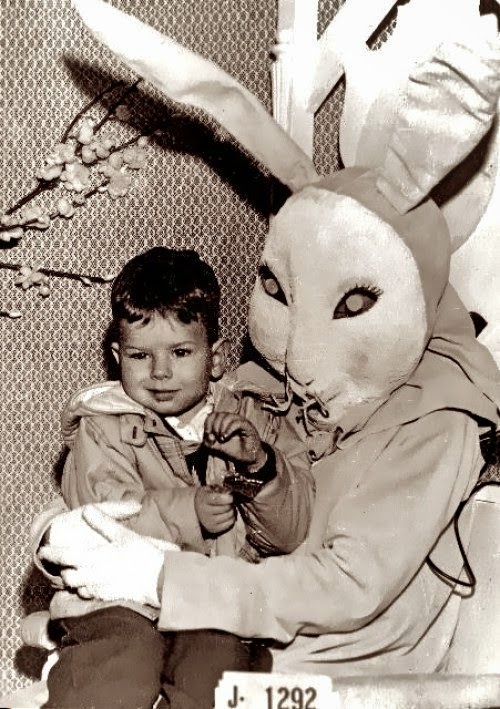 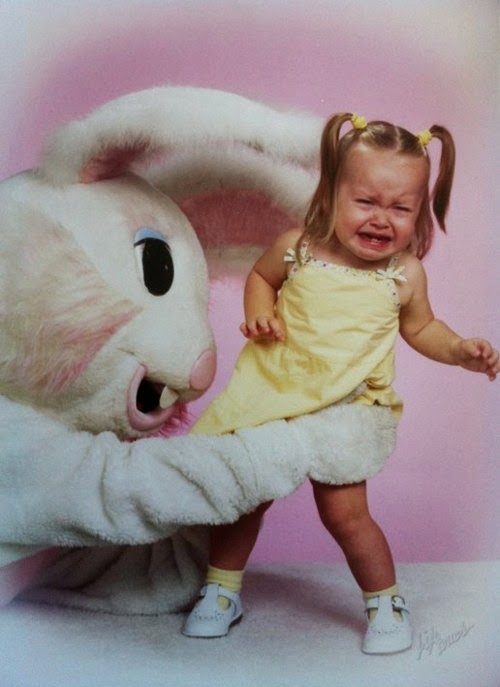 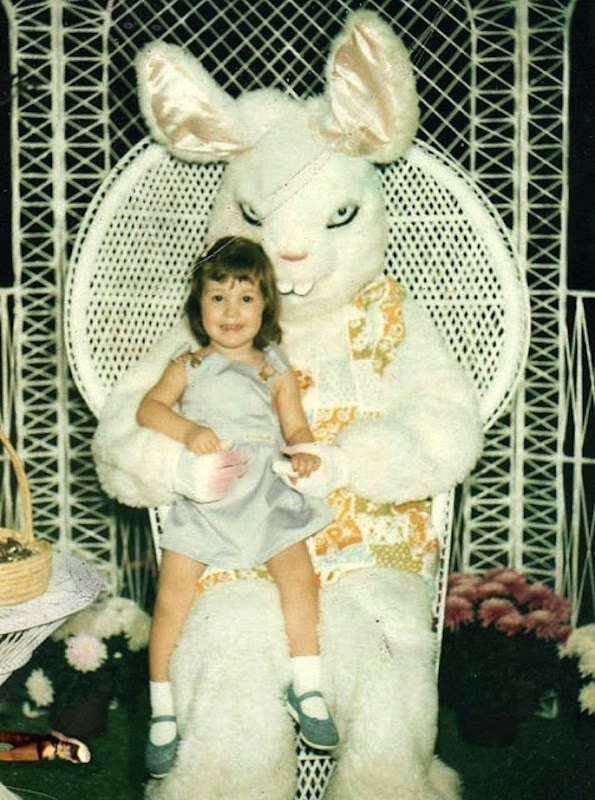 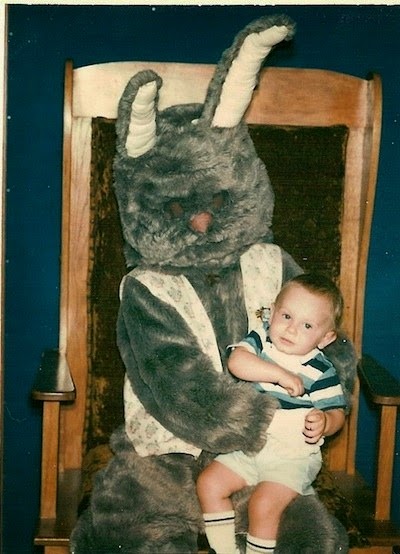 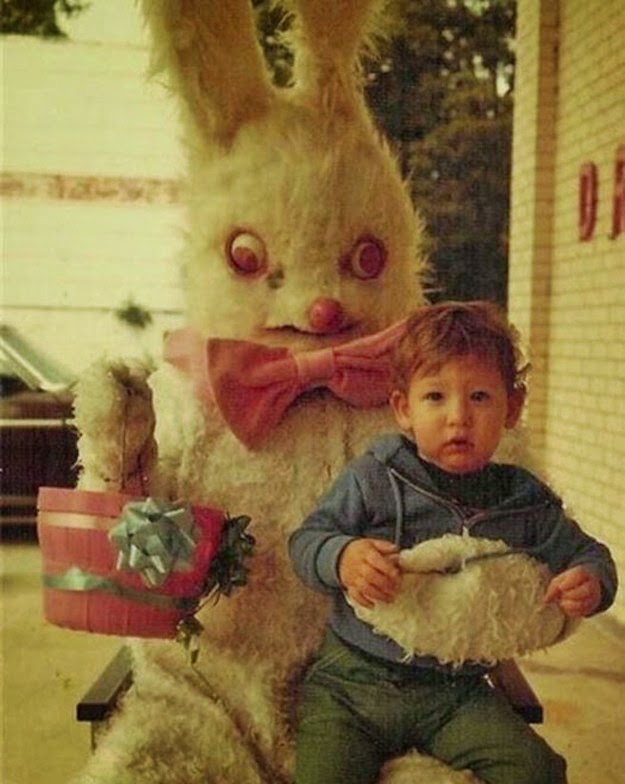 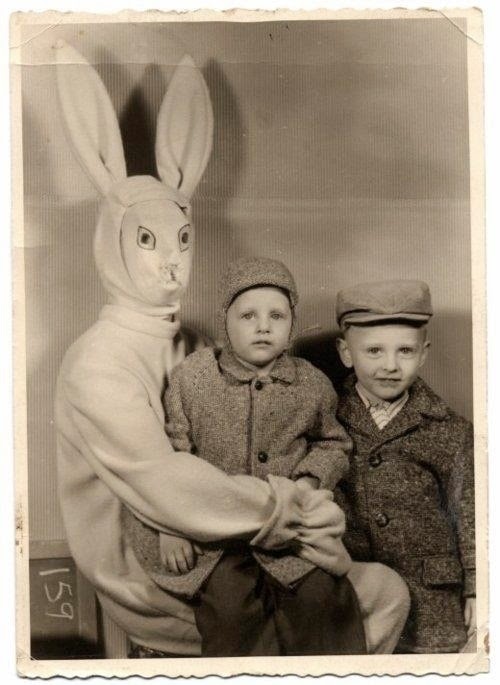 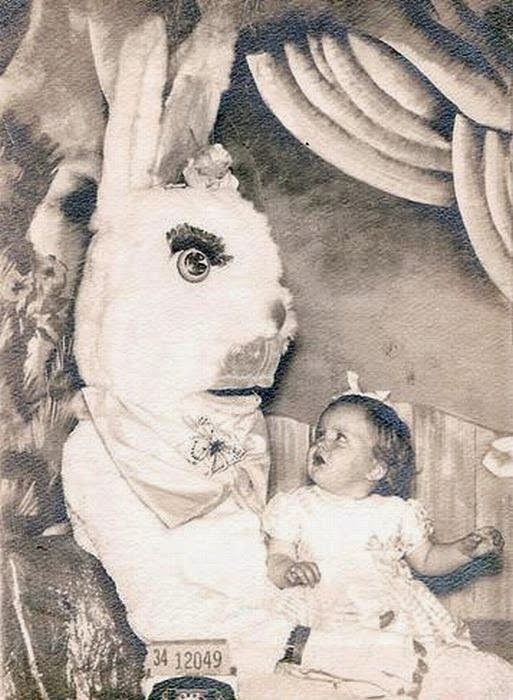 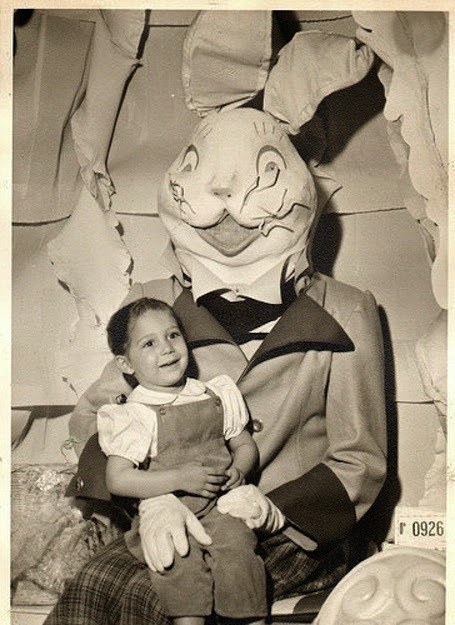 Yup, welcome to the nightmare of vintage easter rabbit costumes from hell.
Posted by Booster Gold / Javier J. at 2:29 PM No comments:

So.. this rap exist.

No, but fucking seriously... go get your beaver checked, ladies. Cancer is not something you want to be surprised by.
Posted by Booster Gold / Javier J. at 11:51 PM No comments:

Great, another fucking FROZEN post, is probably what you're saying. But bare with me, this one is Kristen Bell being her adorable self and doing a song from the film. What more could you ask for?

So this little new short was a trip down nostalgia lane

In this day and age with the advancements of basic technology, it does leave the ability for parents to be far more annoying about capturing those everyday moments of the children they crank out. But in some cases you can make something interesting out of the regular stuff.

Like this little 14 years of growth summed up in 4 or so minutes.

I'm sure in another two or three years she'll be over this and wonder why mom keeps taking pictures of herself. It's okay, momma. You could just sub in all the selfies she'll be taking of herself if she ever decides to stop.
Posted by Booster Gold / Javier J. at 12:21 PM No comments:

This Coen Brother's movie turned Television show is rather strange of a concept, but shit if this trailer doesn't make it look so gosh darn exciting, ya' know.

For example, for men, there's no shame in their game. Women on the other hand.... Well, their poop sometimes doesn't stink for a reason.

In honor of a special day tomorrow for a certain teacher I care about, here's this little piece about teachers and the reality that they're a very poorly paid baby sitter that also has to come up with lesson plans for your stupid children.

Yeah, we need to change some stuff about society asap.
Posted by Booster Gold / Javier J. at 12:33 AM No comments:

I'll fully admit that this is a lot better take on Superman's flight than I have seen in film. Not to mention that it's a creative way to do it. Bravo to these fine gentlemen.

I'll admit it, I really like the look of pin up culture. The dresses and the hair style. I dig it. So here's a little something for you ladies to put together in the hair do department to turn those heads with three day old hair.

In 2015 when he takes over David Letterman's spot in the late show, the death of Stephen Colbert as we all know him will be upon us. No more fake right wing Bill O'Reilly parody. But I guess that's not a terrible thing. I mean, look at this man interview Neil Degrasse Tyson as "himself"

Well, if this isn't just something utterly amazing. Enjoy.

A trip into my mind... or how I keep it from crumbling lately.

While we wait for Star Wars Episode 7 to surface in how questionable it may be, we get this summer time science fiction picture by none other than the Wachowski'... um. siblings.

It has Mila Kunis and Channing Tannum, so it's bound to get some appeal by the fans of those two actors, but more to the point, it looks really good. 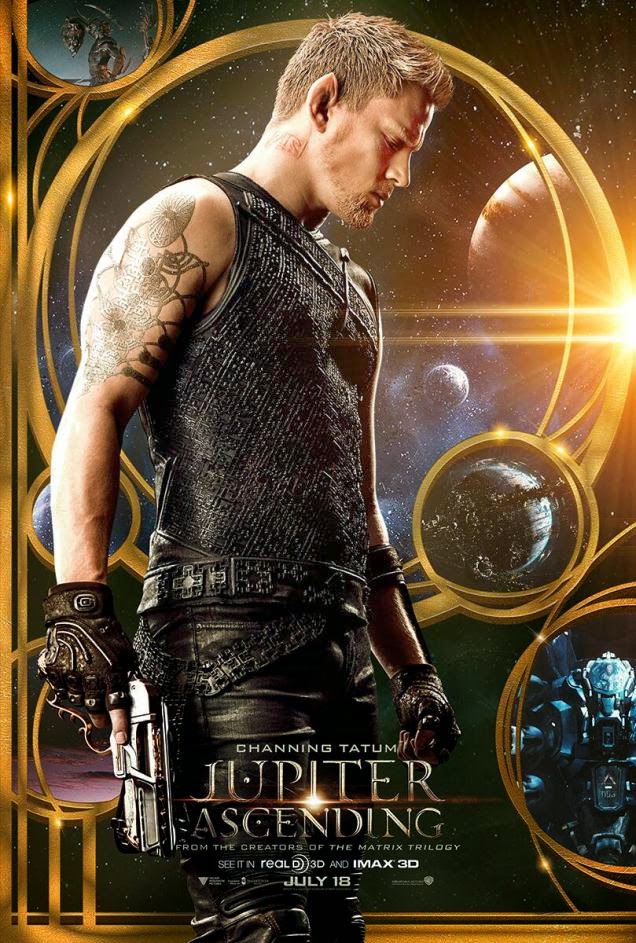 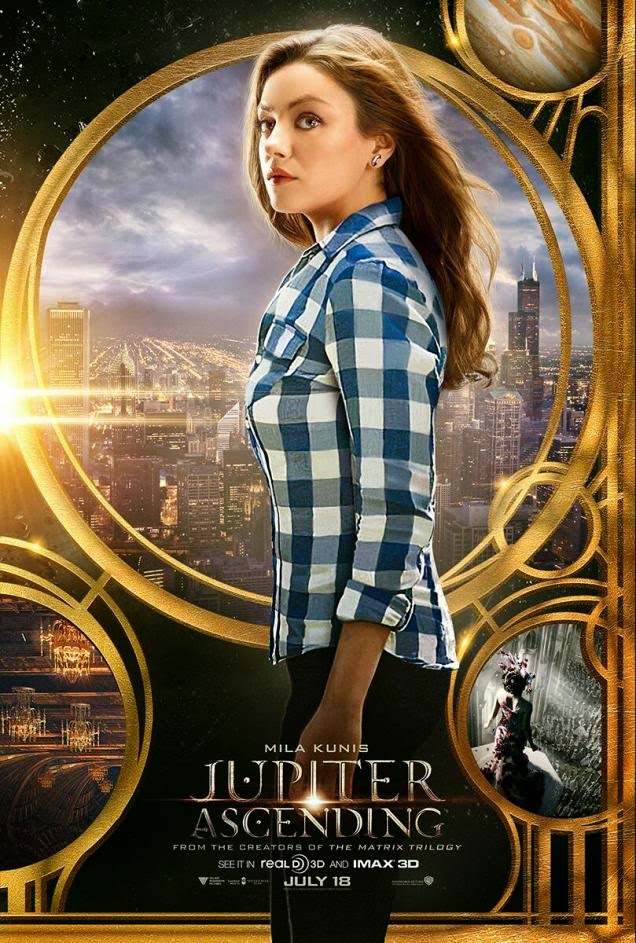 I gotta say, Mila is looking mighty cute in that poster. Or perhaps I just really like that pattern of shirt. I dunno. Either way, I'm looking forward to this flick.
Posted by Booster Gold / Javier J. at 9:31 PM No comments:

I mean, this is boss style, yo.

Now that it's near my birthday, I'd like to just put a clip of gals roller skating, since apparently that's one of my fascinations these days.

That's the stuff. But let's put it out there, the original 24 hour version of this song also had a roller skating gal in it skating in Downtown. And man, was she a looker.
Posted by Booster Gold / Javier J. at 2:16 AM No comments:


You know what, I'm just going to pretend I live in a universe where this was the final cut of the series How I Met Your Mother

With only a few more days before we see more of what Game Of Thrones has to offer us this season, how about we wet that appetite just a little with a taste?

If there's one day that you shouldn't believe anything you read online, it's today. April 1st is the one day when every website this side of... well, anywhere starts to crank out their April fools jokes. Some are creative, some aren't. But who am I to judge?

Well, google picked up the ball and ran with the idea this year and cranked out this little new job title and job search..


Got to admit, it's pretty creative. Not to mention that it actually functions. Very strange, but that's April Fools for you.
Posted by Booster Gold / Javier J. at 4:03 PM No comments:

Oh man, yeah, this is amazing.