This year I'm just staying the fuck in. Fuck all that bullshit that happens out there in the world. It's goddamn cold this year.
Posted by Booster Gold / Javier J. at 1:55 PM No comments:

Last year around this time I was telling myself that 2014 would be better. It sure as hell couldn't have been as bad as 2013 was. Man, I have to give it up to 2014, cause you showed me how fucking wrong I was. But then again, I didn't need you to show me, it's clear that social media like Facebook can just rub that in my face with ease. Much like how they rubbed it into everyone else's face that they were having a bad year.

Last week, the moment after Christmas ended, Facebook was already going full steam in wrapping this year up with the bombarding of "This is your year" post that you could annoy the fuck out of your friends with by posting on your wall.

What this algorithm was drawing off was looking back at your time line and picking out the most LIKED pieces in your feed and plumping them down all on one handy palm full of sand to toss into the eyes of yourself and your friends alike. What Facebook didn't factor in was that not everything that you post that is liked is something that is positive. 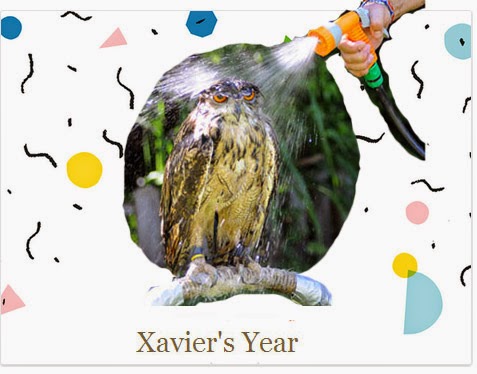 For many, that first few post in January 2014 could have been one of heartbreak. Say for example that you broke up with that cheating significant other and many of your friends, like most friends would do, liked that post because you were getting out of an abusive relationship. While that was a great moment, you may not be fully healed from those wounds just yet.

In my case, Facebook plopped down that the first majorily liked post I made of the new year was when I posted that my father had passed away. Yeeeeah, that was pretty much all it took to realize that this past year wasn't a great one for me.

And really, it was shit on a shit sandwich covered with shit sauce. I had a series of family situations from the fallout of my father passing that I'm still not dug out from under on. Dealing with his finances and the time shares he left behind - mind you, please do not ever ever EVER buy a time share. It's like having sex with a hooker. Sure, it'll be a wild fun once, but that shit will leave a nasty STD with you that not even death itself can remove.

This year I also dealt with burning of bridges with family. From my Grandfather who was abusing my mother financially off an agreement that my father made... and by all accounts should have died with him, to having to evict my sister from living in my building and the fallout of having to deal with her and her crazy boyfriend. Mind you, he did slash my tire... this was after trying to be nice and NOT letting the cops get involved when they trashed the apartment in a domestic dispute.

Back tracking to the death of my father... yeah, the can of worms that opened up after his death is something I didn't fully expect. I knew the man had secrets, but the extent of them... Jesus, I don't think I was prepared for. The balls on the man...

But yeah, it's been a very very rough year for me. To the point that I should be busting out some Arya Stark laughter at how fucked up it has been.


Sure, I had a couple of fun vacations this year. From going to the South and enjoying San Fransisco, but those were just brief moments of an otherwise bad year that still has its claws in the things that I do. Those enjoyable moments seem to be too few and far between. And yet every year I tell myself that the next year will be better. That it'll be different. That life won't find a way to completely fuck me over...

After the year I have had, I'm not prepared to tell myself that anymore and just roll with the punches. Those ups and those downs... and some more of those downs. I mean, there's a lot of downs, I tell you. So hey, I guess there's some reason to just look forward to tomorrow. It signifies that 2014 is dead and can no longer hurt me.

Apparently the FAA really thought that the streets would be lined with shitty drones after christmas so much that they made this power point level presentation to bash over your head.

But hey, there was nothing in that video about your safety in using a drone on the mean streets of L.A.

Craig Keeps Banging on your Drum


Craig Keeps Banging on your Drum

Well, duh, I guess it's time to look back at the year that was since Christmas is now over and we're all going to dance on its bloated corpse.

There's Gotta Be a Better Way


There's Gotta Be a Better Way

I really need to question why humanity needs something like this...

On the flip side, I'm thankful now of my gifts because that wasn't one of them.

Forget anything else you need for the Holidays, this is the best gift - 9 hours of Craig Ferguson

This was pretty bad ass. Enjoy

Another lost to the late night game is The Late Late show with Craig Ferguson. Man, the man spoke from the heart when he wasn't being a complete loony.

This past week was a whole lot of feels with the loss of a few late night host and some major tv/franchises. More on the rest later, but man, I'm going to miss Stephen Colbert's fake republican right leaning character. Here's just one moment to highlight how amazing he was on the show.

This is an odd take on those stupid sounding sex positions.

And if you're smart, you will try this one as well.

With the Hobbit's last installment being released today, may as well leave this here.

Well if this isn't some good news for the coming year.

So this video will help you make hobby rockets out of sugar and kitty litter. Who would have thought that those two items could get your ship blasted to the sky. At about 700 meters high.

Well then, this is odd.

It's the time of year to drink heavily. Which has something to do with the fact that it's also the time of year that you are dealing with the most amount of family. Go figure. Either way, Ron Swanson here has a song for you on the matter.

Christmas is just around the corner and you know what that means... X-mas holiday parties!

So let's get this party started!

I dig this little run through the ages on what socially accepted face painting is. As a feminist I both have strange feelings for making yourself up that is socially acceptable. But at the same time, it's a great way to empower yourself in that means that society has left. In embracing social standards of beauty.

Either way, this was a nice video.

I have seen the future for pot heads and beer bong freaks. And it looks beautiful.

Here's some notes on Interstellar now that it has been out for a bit of time.

At the beginning of the film when the drone comes into Cooper's sight, as well as when all the farming equipment he programed goes crazy at the dude's home because of magnets/gravity, that just seems like, I'm guessing, that the THEM that opened up that warm hole in the future isn't humans, it's the TARS robots. They're the machines from the future communicating in a manner that to them via gravity, is a normal part of their many dimensional understanding.

Hell, I'm guessing that they even manipulated Cooper's test ship to and made him crash so that he had to become a farmer.

So the future is there for humans because the TARS of the future set it all in motion the first go around. Thus we avoid the time paradox stuff that usually plagues this sort of film.

Besides, it's not like it was all explained to us in True Detective anyway....

In 1986 a flawed reactor design and some serious missteps made by nuclear power  plant workers led to one of the world's worst nuclear incidents in the Chernobyl disaster. It caused explosions and fires and essentially created a ghost town overnight in the nearby city of Pripyat.

So the final of Peter Jackson's LOTR franchise films comes out in a couple of weeks and man, does it look fucking epic.

I don't care what anyone says about this not needing to be three films. I have loved every second of it and actually seeing the battle of the five armies opposed to Bilbo just being knocked the fuck out is so awesome.
Posted by Booster Gold / Javier J. at 3:09 PM No comments:

Maybe we should just let this franchise go, cause it's on its own crazy train at this point.

Jesus Christ is My Nigga

Jesus Christ Is My Nigga

The Flash and Green Arrow


The Flash and Green Arrow.

As a fella who sure as hell loves both Television and Comic Books. Going strong on 18 years attending comic con now, I really was impressed with how DC handled their television side. Not so much their latest film franchise, but hey, at least they got something right.

Now that Flash split off from that and we get both building a solid foundation for the future of DC TV, we are able to achieve things such as this utterly amazing possibly of having a Green Arrow/Flash crossover that looks so damn fun.

Check out the promo.

I can't explain how excited I am for this two part franchise crossover. While I had hoped for maybe a Green Lantern/Green Arrow combo, I'll gladly take Flash getting into the mix on this one.
Posted by Booster Gold / Javier J. at 6:10 PM No comments:

Well, I guess you probably needed this back then. Maybe even now, you doofus!