Making A Game Out Of War

Making A Game Out Of War

I used to work a start up computer cafe. It was a sort of project between high school friends and well, it failed terribly. What I came out of that with was getting bored with video games that leaves me not addicted to playing much of anything. It's like catching your son smoking and then making him smoke the whole pack at a time. That sort of too much to ever care about it. Day in and day out I would play video games.

Most of these games were war simulators. Counter Strike and Battlefield 1942. Both were just online multiplayer games that gave you guns and told you to shoot the enemy before you see the whites of their pixels. Much the same, the US army went ahead and did their own service/video game called America's Army. It was nothing more than army propaganda and recruitment tools.

So the question we should be asking is how soon is too soon? I'll be the first one to admit that after 9/11, I was all for not giving a shit if it was "too soon" to try to make a joke in order to deal with the pain.


But as Gilbert Gottfried pointed out, we need to move on with it. So the question with this is why I'm not entirely on the fence here with this move to make a video game out of a modern combat theater piece that is only a few years old.

With that all said and done, it looks like War isn't hell anymore, It seems like War is simply a game

There have been books, movies, poetry and even rap songs coming out of the war in Iraq. Now, there's going to be a video game, one based on the November 2004 battle in the Iraqi town of Fallouja that left dead 38 U.S. troops and an estimated 1,200 insurgents 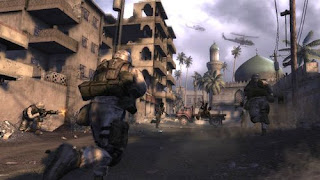 I'm not exactly sure how I feel about that. On one hand doe we need to play a war campaign for a war that we have troops currently stuck in? Isn't this sort of giving the enemy an insight on what our troops are geared with or what their formation is during a battle?

Hell, the Vets of that battle are more than likely still doing a tour or two there. It seems really odd to be able to play a battle they risked their ass in before they get home and play it themselves on their xbox. Also demeans the risk they took when you're just running and gunning when they actually risked their ass and shit their pants because of the battle.

It also takes war flash backs to a new meaning when you not only see/relive a battle in your mind, let alone all your draft dodging buddies decide to play a multiplayer campaign of it on their PS3.... 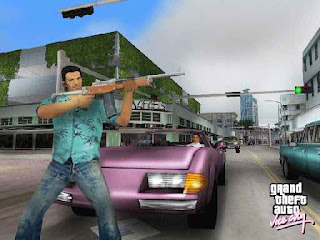 We shouldn't be desensitizing war like this. Part of that hippie in me just thinks that the easier you make killing someone, the worse our society will be. I know I stopped giving a shit about grand theft after GTA: Vice City. I also busted out my 80's music... But even they waited a good 20 years before touching on the 80's. Any time before that would have been way too soon to remember the 80's again.

I'm just as wrong for playing a lot of WWII shooter games but this seems like poor taste, or at the very least it seems like something that is way too soon considering this battle just happened a few years ago. How would we feel if them terrorist decided to create a "Fly plane into building" flight sim and released it in this sort of high profile situation a couple of weeks after 9/11? We'll never be forgetting that, thems for sure.
Posted by Booster Gold / Javier J. at 6:18 PM