I mean, seriously. It's used by every fucking congress person, senator, president.. every agency uses it. Fuck, the California DMV has its hands in Twitter. You can actually follow the DMV on twitter. Who is oddly enough following Caltrains, The Ca. Sheriffs Dept, etc. The only question is how long do you have to wait in line to read their post?

Obama should just go out and nationalize twitter. Sure, it's just cell phone text messages posted publicly on the internet. But it seems to be the latest craze in this continuing craze to become famous, even if it's just on the internet. 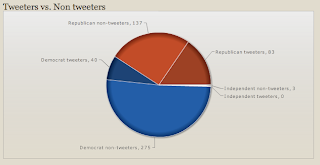 Could someone help these guys out with their excel graphs, they really don't get how to show data in sensible ways

Twitter and Facebook are products of the "look at me! am I famous yet?!?!" generation. I can't say it's the worst generation, but they sure don't have much going for them so far. Do we really need to know that you're just feeeling things right now. How unique you must be because you have feelings and internal dialogue. Most of the time it's completely useless and very much crossing the lines of too much information needed.

And yet still, I suppose it is all inane shit on the internet. It's like piling a dead skunk into a garbage dump and then complaining about the stink. It's par the course of the internet to contain loads and loads of inane shit. Maybe the fact that senators and other important types can reach a global audience instantaneously far outweighs the tripe of inconsequential teens. 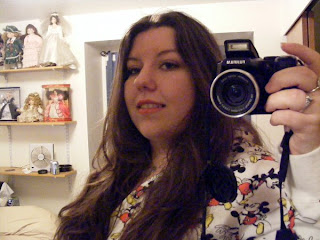 Oh, who am I kidding, it's actually distracting them. Look at Barbara Boxer's twitter to see that she simply spends her time thanking people. A bunch of circle jerking going on there. During a Presidential speech you could find many congressmen and women twittering away. Shouldn't they be paying attention to what is going on instead of commenting on how boring something is or what someone is wearing?

This isn't just me being old. I'm not hating because it's pointless. I'm sure there's some use for it but it comes across as being used for completely pointless purposes currently. Just think of all the exciting new technologies and forms of communication I'll be faced with down the line and able to loathe and misunderstand as I make my way through my 30's, 40's and 50's, until finally I'm too old and holovision makes no fucking sense and why can't these motherfucking kids just go back to regular e-mail like normal people.

More so that I think TWITTER is such a pussy name for a program to use. I would update it a lot more if it had some manly name. Nothing more pansy like than saying you just made a tweet. Something like Dumpster. Oh man, I would so update my DUMPSTER account so much more. Yeah, that'll be a good thing. "Just killed a man cause he looked at me cross ways!"

But hey, there has to be some good out of all of it, isn't there? Sure. Here's some cool/useful twitter accounts going that can give you a chuckle or actually be informative

Jack in the Box

You can see the Earth's Vital Signs...

And with that, I'll stop this since I clearly went over the 140 character limit.
Posted by Booster Gold / Javier J. at 4:21 PM