WB Gives Me A Gift

WB Gives Me A Gift

I worked at a lot of different studios in my time in the industry but I never worked at Warner Brothers. So it's a bit of a wonder why they decided to give me a birthday gift. An animation mural

First a little back story. The old WB animation mural was around for a long time and then it was taken down.

Here’s a sure sign of the apocalypse — or at least the end of a local cartoon landmark. Warner Bros. has quietly removed its huge Looney Tunes/Hanna-Barbera/Warner Animation mural (above) during Christmas week. Bugs Bunny and company have adorned the Burbank studio at Olive and Pass Avenues for over 15 years.

I was driving past the studio yesterday when I noticed (and snapped the photo below) the mural was gone. To give them benefit of the doubt, perhaps they are going to replace it with an even better graphic of Bugs Bunny and crew. I hope so… but who wants to bet that Harry Potter or the live action Dark Knight will soon be guiding us toward the Cahuenga Pass.

This drove many people bonkers because it was a nice view when you were going from Burbank to Hollywood. A nice beacon of a childhood.. or more of just my inner child enjoying the action of animated characters. Either way, it was really cool.... and it was removed. 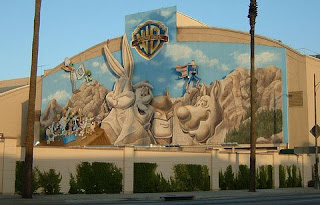 For some time now it has been bare of anything interesting. Causing time to go just that much more slower when stuck in traffic here. That is till my birthday, of course..

The evening festival event will feature entertainment, prizes and fun, for families and fans, including a performance by the Beat Freaks, the all-girl dance crew from the 2009 edition of AMERICA'S BEST DANCE CREW.

Come dressed as your favorite DC Comic super hero (Batman, Superman, Wonder Woman, Green Lantern, etc.) or other Looney Tunes or Hanna-Barbera character. There will be prize giveaways, including tickets to the Warner Bros. Studios VIP Tour, as well as DVDs, toys and more. Meet Bruce Timm, James Tucker and Glen Murakami, the creative team who bring your favorite super heroes to life. Learn from our team of animators how to draw your favorite characters. Refreshments will be provided.

Visitor check-in is located at Warner Bros. Gate 3 (Parking Structure), across from the Gate 2 entrance to the studio lot. Everyone attending the show must have a valid photo ID available for security purposes.

Again, this takes place on the 7th. It being the glorious day of my birth just leads me to wonder on how long they were planning to give me this wonderful gift. Now everyone driving from Burbank to Hollywood will see and enjoy my new birthday gift. I don't mind sharing with everyone, though I guess it would have been nicer to get an actual gift for myself. But enjoy folks, I laid down a birthday wish for this and you're all going to enjoy the fruits of my date of birth. 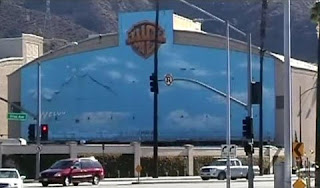 Someone took an eraser to this master piece!

The only question is what if it's not cool? I mean, what happens if they don't use the coolest shots of Brave and the Bold on there? Will they use a Bruce Timm/Paul Dini Batman on there? What about the Animaniacs? Will they finally take my advice and turn the water tower during the Holidays to include those monkey children on there? Only time will tell.

Here's a little sneak peak at what is going to be one hell of a kick-ass mural (all for me!) 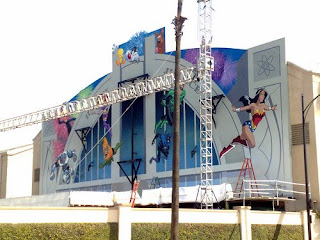