Dear Esteemed peon of a pay grade lower than mine,

Today I have come to the conclusion that my executive compensation and its various bonuses are not enough to guarantee that my spoiled children can't destroy the wealth I have amassed in the first generation after my passing. To remedy the situation, measures must be taken.

Banks are using a little-known tactic to help pay bonuses, deferred pay and pensions they owe executives: They're holding life-insurance policies on hundreds of thousands of their workers, with themselves as the beneficiaries.

Banks took out much of this life insurance during the mortgage bubble, when executives' pay -- and the IOUs for their deferred compensation -- surged, and banking regulators affirmed the use of life insurance as a way to finance executive pay and benefits.

Towards this end, I have decided that is is prudent for me to profit off your deaths.

The insurance policies essentially are informal pension funds for executives: Companies deposit money into the contracts, which are like big, nondeductible IRAs, and allocate the cash among investments that grow tax-free. Over time, employers receive tax-free death benefits when employees, former employees and retirees die.

This should not be taken as an encouragement to die early, especially if you are tirelessly pursuing the good of the company by working 80-hour weeks, but we do encourage you to keep yourself posted on the market situation and the retirement schedule of the senior executives so that you may pick the most opportune moment to croak.

Though not improper, the practice is similar to what is known as "janitors insurance," an insurance-on-employees technique that has long been controversial. Critics say the banks' insurance contracts are a way for companies to create tax breaks for funding executive pensions. And some families have complained that employers shouldn't profit from the deaths of their loved ones.

Haters may hate but it's tax free so don't hate the playa, hate the game, yo.

As an incentive to get employees to consent to being covered, some companies offer them a small portion of the death benefit. But the coverage may end when they leave the company.

In December, Irma Johnson accidentally received a check for $1.6 million, from Security Life of Denver Insurance Co., payable to Amegy Bank. According to a lawsuit Mrs. Johnson filed in February in a Houston state court, in 2001 the bank told her husband, Daniel Johnson, a credit risk manager who had survived two brain surgeries, that he was eligible for supplemental life insurance of $150,000, if he signed a consent form authorizing the bank to purchase an insurance policy on his life. Four months later, the bank fired him.

Mr. Johnson died from a brain tumor at age 41 in 2008. His widow and two young children received no life-insurance benefits, which the bank had canceled when Mr. Johnson left. Mrs. Johnson says her husband was cognitively disabled when he signed the consent form.

A spokeswoman for Amegy Bank, a unit of Zions Bancorp, declined to comment on the suit, but said, "Participation in Amegy's BOLI plan was completely voluntary; employees consented to participate."

Compensation time! I suppose this was more hilarious before states ATTEMPTED to change the laws on life insurance to require your consent. But efforts to rein in the practice largely have been unsuccessful, including the most recent rules Congress enacted in 2006. The rules limit companies to buying life insurance to just the top third of earners, who must provide consent. But the rules don't apply to life-insurance that employers bought before the August 2006 rules, which cover millions of current and former employees. 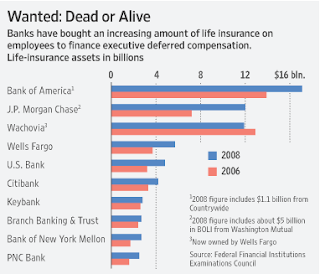 Companies would just take out a secret life insurance policy on you and bet on your death. Do you suppose it's a company-wide policy or that the people taking out the insurances are like "Heh, I bet Robert from accounting will die before retiring."

Maybe that's why they're planning an employee deep sea diving retreat or other dangerous activities instead of that open bar holiday party at the local hotel lobby.

The insurance industry is the first industry that needs to be completely eradicated. It's required by law that you need car insurance. I understand the logic. There's a lot of people out there that are too silly to worry about putting money aside in the event of a car accident to cover the damages of your car as well as whoever you hit and fucked up. But the whole system is beyond screwed. I'm pouring money into this fund month after month and in the end of the year I don't get any percentage back from it.

Insurance is suppose to be a "In case shit happens" fund. Well, if it doesn't happen then I should get my money back. Much like these abusive methods of taking out insurance policies on your employees. It's a real risk that you'll lose someone important to the business and you company may suffer, but to fuck them over in this method and take it out on them without telling them... Sheeeeeit, that's just wrong all around.

Then again, I'm not sure I feel entirely sorry for them. Bank employees know exactly who they're working for. It's like the conversation from Clerks about the contractors who worked on the second death star in star wars. They knew the risk in taking the job, fuck them if they get fucked over.
Posted by Booster Gold / Javier J. at 5:42 PM