YOU GET A WING, YOU GET A BREAST! Oprah Lowers The Bar

YOU GET A WING, YOU GET A BREAST! Oprah Lowers The Bar

Well, it's not a brand new car, but at least you don't have to pay the taxes on this one. Oprah is giving away two piece chicken meals at KFC... oh, I'm sorry, KGC. They no longer want to be known for their fried chicken. No worries, KFC, I didn't think your fried chicken was good anyway. Your biscuits on the other hand, were delicious. So how about you change your name to KGB?

Back to the deal because, free is free. So what's the low down?

Get two pieces of grilled chicken, two individual sides and a biscuit!

Yeah, that's right. All you cheap mother fuckers hoping to get a free meal for your mama's on Mother's day need to plan accordingly. I cant' stop laughing at that. Did you really need to make their be a limit for Mother's day? Is there such a rush for KFC KGC on Mother's day that they would have to limit this coupon to be void on Sunday? You're thinking way too highly of yourself, Masters of the seven herbs and spices. Though I know it will probably make some people go "well shit, there goes my Mother's Day idea".

I also love the fine print of this deal. It's so careful in the way it's wording everything.

* Terms: Free offer good for two pieces of Kentucky Grilled Chicken™ (manager's choice) and two individual sides and a biscuit at participating KFC restaurants located in the Unites States, while supplies last. Limit one offer per coupon, one coupon per person during offer period. Must be redeemed in person. Not good with any other offers. No photocopied, mechanically reproduced or altered coupon accepted. Coupon cannot be sold or traded. Valid only if downloaded from UnthinKFC.com. Applicable tax extra. Void where prohibited. By downloading coupon, you agree that KFC is not responsible for any technical problems or malfunctions of computer systems, servers or printers or lost or unavailable network connections. You are limited to 4 downloads of coupon. Coupon fraud is punishable by law.

COUPON FRAUD IS PUNISHABLE BY LAW!!! OH NOES! The law is going to come in and cuff me for making multiple copies of this. I think that's how the hamburgler turned to a life of crime. One too many free burger coupons and once he got out of the pokey, it was just a matter of time before he was knocking over Jack in the boxes. 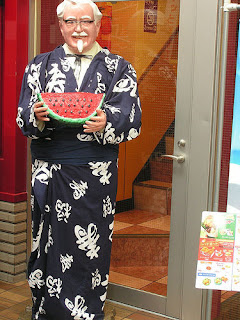 Though, all coupons actually say that. I just find it funny that KFC KGC is warning us that they wont be responsible when your computer runs slower than shit because in order to print this, you have to load it up from coupons.com. That means you have to install a spyware piece of shit in order to print the coupons. Thanks for wiping your hands of any responsiblity in making my hardware suck ass, Oprah.

I'm wondering what this new "UnthinKFC" campaign is about. Are they trying to reverse KFC's image of shitty unhealthy chicken? Is that even possible? Maybe they wont people to have the same mentality that I have. That is if I wanted grilled chicken, I'd grill it myself. Now, if I want fried chicken... I'll go to Roscoe's. But if I want world-class diarrhea, I'll go to KFCKGC. You should try their mashed potato bowls (for if you want corn in your diarrhea). 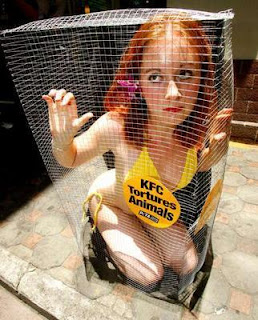 I know I keep writing KGC, but that's just part of their new marketing handle. It's common knowledge that they officially changed their name to "KFC," and have abandoned the "Kentucky Fried Chicken" name in hopes to get people not thinking about the fried aspect. It's better than SyFy, I guess. But not by much.

Though I'd like to squash the rumor that they had to legally change the name because they sell genetically modified chickens that are born without their beaks and aren't technically kitchen. This isn't 5th grade, folks. Let's show some maturity. 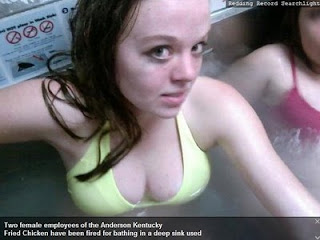 This blog on the other hand... all about objectifying.
When will they offer Grilled employees instead of those in the sink fired ones?

If I've had my way, I'd gladly state how stupid the UnthinKFC motto is. It seems like a terrible name to pick though, considering KFC will in fact make you "un-thin". El Pollo Loco is so much better at essentially the same gimmick. Hell, I'm not even a chicken type of person. To me it's typically done bad. Good chicken is a rare thing so I don't bother with bland chicken anyway.

But even if you can get the same shit other places done a lot better, Oprahoids will still try and try. It's like the Oprah book club. To be perfectly honest, I've only met one person who loved Oprah but wasn't completely bat shit insane. Perhaps the Jewish side balanced out the crazy since they were already neurotic enough.

If you listen carefully you can hear the mashing of Oprah fan fingers in distressed E-machine keyboards nationwide, twitching as they frantically slam their mouse against grandma's cardtable in utter, desperate, wanton lust for that delicious, delicious chickeny goodness. The comedy gold to be mined from those comments is almost better than free chicken! I give you the comment section of the Oprah website. The things I do for this blog:

"your KFC coupon dont even work get it to work NOW"

"Hello Oprah, I just wanted to say that I tried to get onto the site to print the coupon and it says it's unable to open..Anyway.. Thanks for thinking about America"

"Thanks for saing you are feeding North America and then saying only available in the U.S."

CANADA IS NOT PLEASED!

"Dear Oprah, My family and I just want to say THANK YOU for Blessing us with the coupons. You are Segulah(valued property) to God !" 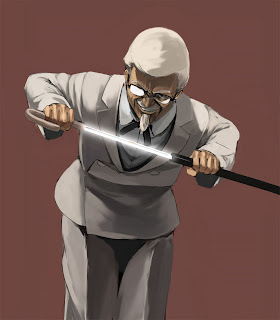 "I tried to use my coupon but when I went to KFC they said we like your socks."

Well, to be honest, they were nice socks.

"I'm on food stamps,but won't take a handout from KFC. I'm not Vegan, just sickened at the videos I've seen of the processing plants KFC uses.They are immoral"

You should see the videos on how they make government cheese.

"Oprah, the thought was so nice, but the process was a nightmare! I am now going to have to oder fried chicken to make up for all the calories I lost by trying to print the coupon."

Oh, I'm sure you've already spent those calories on the food you ate while waiting for the coupon site to load.

"Thank you Oprah, I enjoyed my chicken. You are a beautiful, strong, Successful and an elegant woman. I would love to have sex with you."

"Mymommaalwaystoldmeyoudon'tget nuthun'forfree.NOT EVEN A FREE PIECE OF CHICKEN.THANKS FOR NOTHING OPRAH.THE COUPON ISN'T REAL THERE IS NOT A PAGE AND NOW I MUST GO TO BED HUNGRY"

The internet doesn't exist. We are in the matrix.

So there you have it. Print up your coupon and get on down for some mmmm mmmm deep fried grilled chicken! It's on OPRAH! 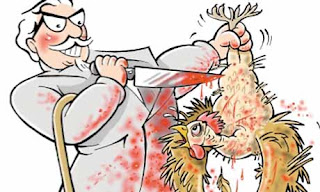 This has got the makings of any good drama: Oprah, grilling, mothers, and controversy!