Being The President Must Suck

Being The President Must Suck

When I was little I would hear school mates talk about how they wanted to be the President when they grew up. I knew better. Why the hell would I want the nation under my control? What kind of a control freak do you have to be in order to do that shit? You see how much shit Obama is getting trying to get proper health care off the ground. Hell, you have crazy pastors hoping that someone kills him. What kind of childhood ambitions would I have if I aspired to be the President? Might as well just want to be killed.

The President has it bad. Too many choices to make and in the end, everyone just remembers the bad things you did more than the good things you ever pulled out of your ass with a hope and a prayer. Yeah, sure. You're going to be in a select club that only 44 other people are in and if you want to talk about special days, forget Valentine's Day, in order to really feel celebrated try being a President. The majority of the people in that club are already dead and all of them, in retrospect, were only human. 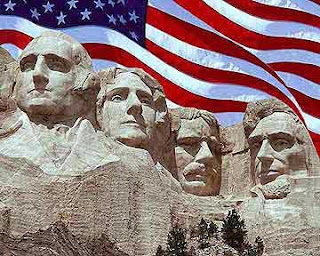 Much like any human, we have our faults. Me? I like to consume large amounts of beer of mircorbrewery levels and then write blogs about pointless topics that have hints of comedy and perhaps some lesson snuck in there. And just to prove to you that your presidents of the past which you should be honoring today aren't beyond human, here's a list of the presidents and the terrible choices they made while in office.

George Washington:
* Pretty sure he said that stopping the lynching of loyalists would be a violation of the "rights" of the people.
* Signed the Fugitive Slave Act.
* Slave owner. 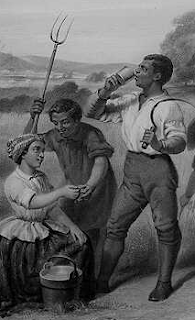 James Madison:
* War of 1812, literally the stupidest war the USA has ever been involved in.

John Quincy Adams
* Nothing, he owns, tell me something he did bad. I dare you.

William Harrison:
* Literally ran on his genocide of Native Americans. 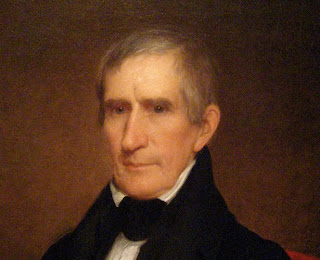 John Tyler:
* Brutal imperialist war against the people of Mexico for some slave-owning anglos.

James K. Polk:
* Brutal imperialist war against the people of Mexico for some slave-owning anglos.

Millard Fillmore:
* Responsible for the creation of one of the most brutal empires in history just so the US could continue its endless expansion westward.
* Compromise of 1850

Franklin Pierce:
* Overturned Missouri Compromise, making more slavery.
* When both fanatical slavery and anti-slavery groups moved to the newly encorperated state of Kansas, formed seperate governments, and essentially had a mini civil war, he did nothing because of states right

James Buchanan:
* Saw the Civil War's beginnings, did fuck all. 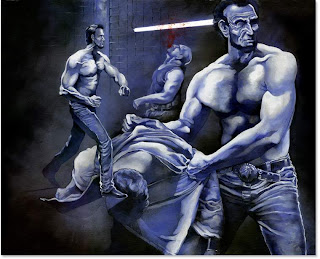 Abraham Lincoln:
* Drafted civilian populace.
* Suspended Habeas Corpus.
* Shut down over 400 newspapers
* Set up a political prison camp on an island off of new york,
* Issued a warrant to have the chief justice of the supreme court Roger B. Taney arrested
* Had senators arrested on the floor of the senate 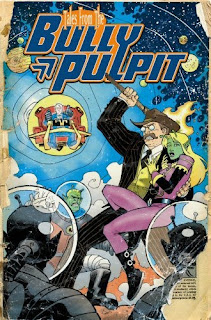 Theodore Roosevelt:
* Invaded Panama to take control of the canal.
* Revised Monroe doctrine to be a rationale for US imperialism rather than a decrying of European imperialism.

Calvin Coolidge:
* Responsible for the economic policies which lead to the Great Depression.

Herbert Hoover:
* Did fuck all for Americans during the Great Depression.
* Sent troops to stop the Bonus Army.
* Mexican Repatriation 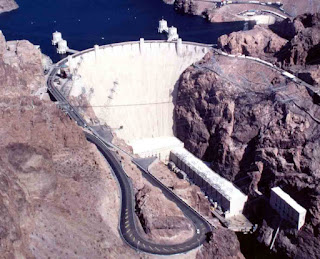 Franklin Roosevelt:
* Firebombed Tokyo and Dresden.
* Purposefully, knowingly engaged in actions that would force Japan to go to war with the USA, but simultaneously failed to adequately protect the US Navy from a (probable) surprise attack.
* Illegally interned US civilians on the basis of ethnicity.
* Mexican Repatriation

Harry Truman:
* Overthrew democratically elected governments of Syria and Greece.
* Nuked Japanese civilian targets, a pointless act done solely as a show of force against the USSR (the Japanese surrendered because the Soviets declared war on them).
* National Security Act of 1947.
* Truman Doctrine
* Supported France retaining its colonial possessions.

Dwight Eisenhower:
* Began US policy of imperialism and neo-colonialism by overthrowing the democratically-elected governments of Iran and Guatemala.
* Started Vietnam
* Started COINTELPRO
* Interstate system
* Fomented revolution in Hungary, which was crushed when the US refused to support the revolutionaries
* Operation Wetback
* Lied about the U-2 spyplane shot down over the USSR, which halted talks to halt nuclear weapons production.
* Korean War.
* Overthrew the government of the Republic of Congo.

John Kennedy:
* Stepped up Vietnam War
* Relocated the Seneca Indians, breaking a treaty and a campaign promise.
* Allowed the FBI to wiretap Martin Luther King on suspicion that he might be a Communist.
* Bay of Pigs
* Executed a coup in Iraq.
* Would have been remembered for more terrible things if he hadn't been killed 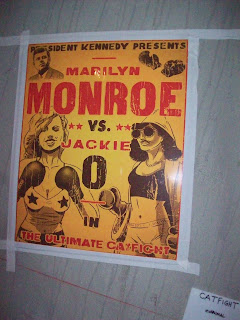 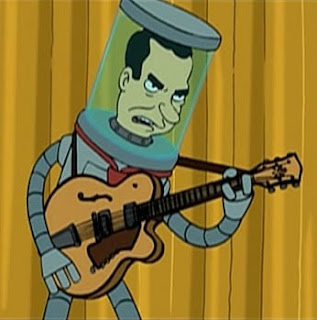 Gerald Ford:
* Pardoned Nixon.
* Brought a whole slough of shitty neocons into the political mainstream
* Failed to implement Universal Health Care
* Gave the OK to President Suharto of Indonesia for the invasion and genocide of East Timor.
* Mayaguez Incident.
* Maintained the embargo against Cuba.

Jimmy Carter:
* Stepped up aid to the Jakarta regime in Indonesia as it committed genocide against the population of East Timor.
* Fed Mujahideen
* Backed a coup in Turkey.
* Failed to implement Universal Health Care
* Refused to return Mohammed Reza Shah Pahlavi to Iran for trial.
* Funded the training of insurgents in Afghanistan and Pakistan in order to combat the USSR's invasion of Afghanistan according to the Carter Doctrine.
* Cracked down on pork spending which in turn got the dems in Congress' panties twisted up in a knot and they sat there like children and crossed their arms and went "LALALALALALA" to everything he said from then on.
* The Malaise speech which did the same thing to all of the US and along with the Iran Hostage Crisis rolled out the red carpet for Reagan.
* Maintained the embargo against Cuba. 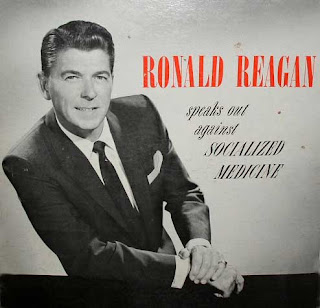 George Bush I:
* Gulf War
* Failed to implement Universal Health Care
* Pardoned a bunch of people involved with Iran Contra
* Stepped up the War on Drugs.
* Appointed one of the least experienced judges in history.
* Appointed Alan Greenspan as Chairman of the Federal Reserve
* Set record deficit.
* Maintained the embargo against Cuba.
* Military aid to Israel. 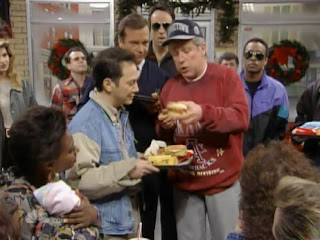 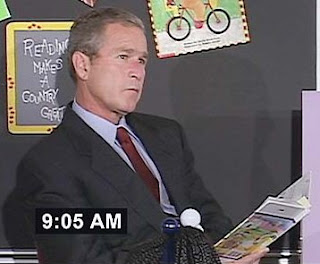 Barack Obama:
* Stepping up war in Afghanistan
* Under his regime, torture rates in Guantanamo have gone up.
* Set record deficit.
* Military aid to Israel.
* Failed to implement Universal Health Care
* Maintained the embargo against Cuba.
* Allowed the Banks to pretty much rape the public
* Still has yet to close Guantanamo
* chooms it up
* is a better campaigner than a better leader 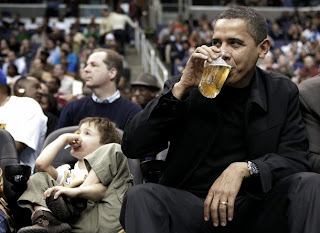 And while we're talking about Presidents of the past - let's talk about a moment that I would consider a precious moment in our nations history. Scary enough, it's dealing with someone I would consider the worst president ever. One who I have constantly made plans to go to his library as well as his grave in Orange County and pissing on. Richard Nixon. From the New York Times

WASHINGTON, May 9 President Nixon left the White House shortly before dawn this morning, drove to the Lincoln Memorial and spent an hour chatting with young people who had come to protest his war policies

I don't have New York Times archives so that's all I can bring up on it now. But doesn't this seem like a remarkable thing for a president to do? For all Nixon's faults, his self-pity and his arrogance, I think it's safe to say that unlike the blissful ignorance of Reagan and Bush, he wrestled with a turbulent conscience. Who can imagine a current President doing this? Having the balls to go down to a Washington memorial at 4.a.m and listen to the concerns of America's young? It's easy to despair over what's happening to the US at the moment, but when I look back at something like this it reminds me that American Democracy means something.

Most of all that no-one is beyond redemption. Yeah, a lot of you are thinking that this was nothing more than a presidential photo op. But then again, what sort of photo op is it without a photograph of the event? 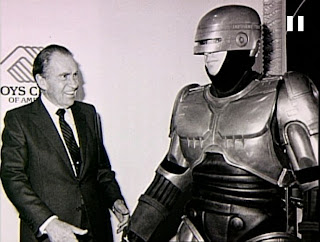 Richard Nixon was evil, let there be no mistake in the history books about that. Richard Nixon was an evil man -- evil in a way that only those who believe in the physical reality of the Devil can understand it. He was utterly without ethics or morals or any bedrock sense of decency. Nobody trusted him -- except maybe the Stalinist Chinese, and honest historians will remember him mainly as a rat who kept scrambling to get back on the ship.

In retrospect, I think I'd rather have Nixon be President-for-Life than have any or all of the ensuing administrations. Hell, if having Nixon in office would have precluded Reagan from being president, that alone is worth it. Nixon hated Reagan and probably would have had him assassinated. That in itself is grounds for me saying that sometimes some evils should be accepted. 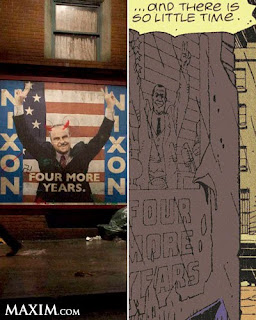 I'm not going to try to defend the asshole but he was trying to convince Congress to pass UHC before Watergate. I guess we're just cursed to not have health care for all options anytime. Bill Clinton almost got there, but some head really blew that one and made a mess of that term of office. Nixon was also known for instituting affirmative action, pushing forward desegregation, and setting up OSHA. So there was something to come from that evil.

Just imagine that if watergate never happened Nixon wouldbe in the top 5 of the greatest presidents and he would have won that election anyway. What an error on his part to even have to go through the whole watergate situation to begin with. I guess great power does corrupt. So perhaps that's why it confuses me that we even have this day of celebration of only 44 men who have stepped up to the plate to lead us, the utterly mindless public into a better tomorrow. 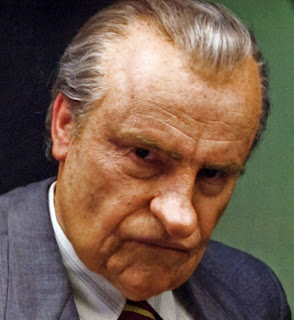 Perhaps I just answered my own question there. In a nation that is full of retards and people who don't know any better and try to tell lead them is a job that I don't think any sane person would really want. It's thankless and as you can see by me pointing out all the negative events that happened on their watch, many of which are not their fault, some of which were caused by the previous administration, I guess this day should be used to think about those people in the past that made those difficult choices and had to live with the results.

So enjoy this day and try to think of one president in the history of our nation and realize how difficult their actions and choices must have been. Don't just use this day to buy a mattress or appliance.