Another Day, Another D-list DC Character Gets Movie Announced

Another Day, Another D-list DC Character Gets Movie Announced

This has really been a big week for comic news. With Marvel being bought out by Disney as the main headline, it's easy to miss the other huge news pieces. That being that Del Toro will be producing a Deadman movie.. and as much as I love the man and his death like bear hugs he gives me whenever I cross his path, I can't say I'll believe it till I see it in theaters. Don't get me wrong. He's an amazing guy who can pound away the margaritas at El Chulo, but he's been attached to how many projects now? At the Mountains of Madness needs to be filmed already.

And we also got news yesterday that Lobo is getting a movie.

Variety reported Wednesday that Guy Ritchie, director of such films as “Lock, Stock and Two Smoking Barrells” and “Snatch,” has signed on to direct a feature film based on Lobo, the ultraviolent DC Comics character created by Keith Giffen and Roger Slifer.

The film will be produced for Warner Bros. by Joel Silver, Akiva Goldsman and Andrew Rona, with the most recent script written by Don Payne.

According to Variety, the story at present will depict Lobo as “a seven-foot tall, blue-skinned, indestructible and heavily muscled anti-hero who drives a pimped out motorcycle, and lands on Earth in search of four fugitives who are bent on wreaking havoc.” In this version of the film, Lobo will team-up with a “small town teenaged girl” to stop the villains.

Production is to begin next year on what WB aims to be a PG-13 film.

Why the hell is there going to be a Lobo movie? Most of all, how is Guy Ritchie going to make Lobo an underdog involved in highly illegal activities that unlikely comes out on top in spite of everyone else being treacherous. Lobo would be the bad guy of a Guy Ritchie movie, not the main character! 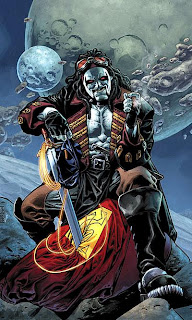 As much as I love Keith Giffen's work on JLI, Lobo was a product of and a response to Wolverine's success as a gritty comic character. He's a 1-dimensional character with no real personality or potential for character growth. I can't see why they would make a movie about a joke character. Let alone change the joke character so that he's willing to team up with a plucky little smalltown goth girl to help him fight aliens.

Lobo in a PG-13 movie, how is that even possible? The character is based around violence and pretty much nothing else. He slaughters his whole planet just to be unique, how do you turn this in to a kids movie? I'm just wondering when a new character is going to be established in the DC Universe to be a parody of Lobo since he had ceased to be parody and became a shitty establishment unto himself. 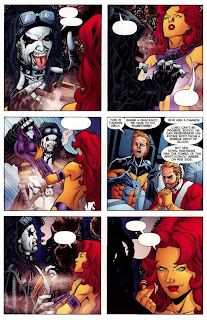 Then we have Guy Ritchie. The man can't make movies that aren't rehashes of Lock, Stock. Well, maybe that's not entirely true. After getting his balls back from long time ball and chain Madonna, it seems like he's gotten some of his old edge back. But then again it's still a variation of Lock, Stock.. not to mention you still confuse me with the rating. Let me get this straight. "Guy Ritchie". "PG-13" and "Small town teenaged girl" do not computer. Now Hard R and "Small town buxom whore".... I think I can get behind that Lobo film.

The worse indicator of this film is Akiva Goldsman. Somehow he keeps getting his grimy mitts on comic properties and turns them into shitfests. I can't explain how he managed to make this pact with the devil but this is the guy who wrote Batman Forever and Batman and Robin, yet somehow got to write again for the upcoming Jonah Hex (Why not just go to the best source of Hex with Jimmy Palmiotti?) and he did one for the Losers movies. He's also set to do the Doom Patrol and Teen Titans as potential future projects. When did he sell his soul and how do I sell mine to stop him? 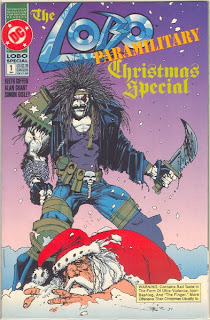 Here's hoping they cast Hugh Jackman as Lobo. Just for the fuck of it. I suppose the only other viable casting option is Ron Pearlman. That would make the eventual Lobo vs Wolverine film so much more comical. Maybe one could see this film drunk. That's the way Lobo would have wanted it done anyway. Besides, didn't they already make this movie?


And since we got two DC movie news out of the way this week alone already, can we finally get off the ground with The Flash already? At least with Ryan Reynolds as Hal they could finally put an end to all the fans who just had to have him play the Flash. Can we all agree that Neil Patrick Harris would be perfect for the role of Barry Allan and cast him already? The only threat there would be that he goes into a speed force song and dance number.
Posted by Booster Gold / Javier J. at 5:01 AM