For some odd reason, Victoria decided that selling sexy clothing wasn't enough. They had to market to the college students specifically. Why? Well, it's clear that college students need some extra incentive to buy their clothing line, right? What better way to do this than to pander to their college alliance

Victoria Secret's Pink is accepting school nominations for the next school they will add into their collection. I hope, by looking at the current list, that you agree with me that most of the schools that have a chance of winning are severely undeserving. Because of this, I feel that its necessary to get you to keep the Santa Cruz mascot up there by voting for it. 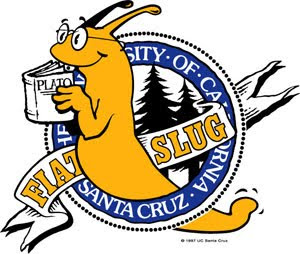 I firmly believe that The University of California Santa Cruz should win this competition.

UCSC's mascot is the banana slug (specifically, Ariolimax dolichophallus). In 1981, when the university began participating in NCAA intercollegiate sports, the then-chancellor and some student athletes declared the mascot to be the "sea lions." Most students disliked the new mascot and offered an alternative mascot, the banana slug. In 1986, students voted via referendum to declare the banana slug the official mascot of UCSC—a vote the chancellor refused to honor, arguing that only athletes should choose the mascot. When a poll of athletes showed that they, too, wanted to be "Slugs," the chancellor relented. A sea lion statue can still be seen in front of the Thimann Hall lecture building. In February, 2008 ESPN Sports Travel named the UCSC Banana Slug as one of the top ten best nicknames in college basketball. The "Fiat Slug" logo prominently featured on campus is a trademark of UCSC owned by the Regents. It was developed by two students during the mascot controversy, who later incorporated as "Oxford West" and licensed their design from the Regents to produce clothing inspired by the university.

I can't see a harder mascot to work with. How terrible is a cute looking Banana Slug sweater going to look like? Banana slug panties? It must be done. Not only that but the School has been featured in Pulp Fiction 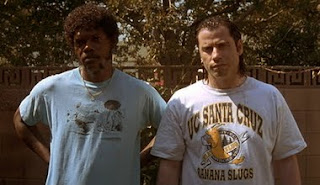 The T-shirt that Jimmy gives to Vincent after they get hosed down bears the logo for the UC Santa Cruz Banana Slugs. This is not a joke. The Banana slug really is the UCSC official mascot.

Just how before someone makes a "snail trail" panty joke from all this? Well, we can only find out if you vote for them. So go and vote now! If there's anything more that you need to sell you on voting, let this soak in, Banana slugs get stuck after mating and must chew off their penises in order to survive and I want a reminder of this in my significant other's lingerie

Currently the banana slug is ranked #1, but that doesn't mean you shouldn't vote for them. They have to win, don't they? What's even funnier is that USMC is up there ranked third. They must be really peeved that a bunch of hippies are kicking their butts. The School is Full of Hippies/Activist who go against the man/establishment/militaries/governments/etc. So it's pretty funny to see them beating them badly. 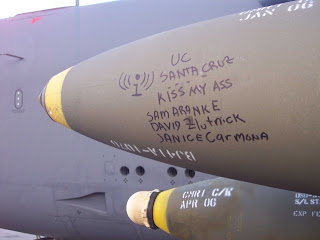 With the top 25 colleges getting into the collection, you just have to wonder what hilarious looking clothes will come from all this coming out in the next collection. Not only is it funny enough that Victoria Secret will have to go out and try to design some sweater with a cute Banana Slug on it, but I really can't think of a better way to give a mascot such a high pedestal to be placed on.

I think the only other suitable odd school mascot would be The Evergreen State College Geoduck. 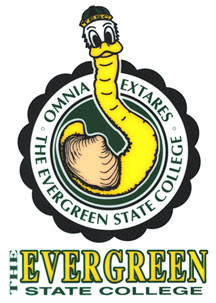 Now that will look good on a set of panties!
Posted by Booster Gold / Javier J. at 5:01 PM