Silly Ads That Will Give You Aids

Silly Ads That Will Give You Aids

I know it's strange for me to talk shit about advertisements given the field that I work in. All that the productions that I work on are simply a reason for the viewer to sit there and watch commercials for products. That's the whole way I get paid. If the show doesn't generate the attention to attract the most eyes towards, then it gets canceled.

Even though you're sleeping on top of a pile of money at the end of the day, you have to wonder is it worth it for your own moral compass? How far is too far in terms of an ad? Are you even getting your message across with what you're trying to advertise for? Take for example this latest wave of AIDS awareness ads.

I know sex sells and believe me, I paused that video at least three times. I mean, did you see that side boobage? Can you blame a guy for that? But then you get to the end and it's Hitler. I did not need to see Hitler have sex. I've already seen him complain about James Cameron's Avatar and Trent Reznor rescheduling his last tours. The last thing I needed was to see him get all freaky and what not. 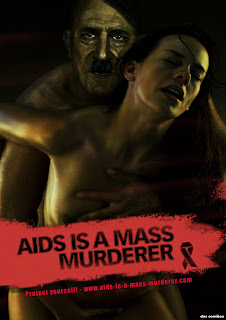 I'm not exactly sure what the message of the ad is. If you have sex with AIDS, you're having sex with Hitler? Ironically, it's Hitler's status as an intravenous drug-user, not as a mass murderer, that makes him a more likely AIDS carrier. Way to do your research, Aids prevention foundation. Besides that, no woman would find that silly mustache attractive. Not in a million years. Same goes with Stalin. Who is getting busy and down to the dirty work himself in this ad. 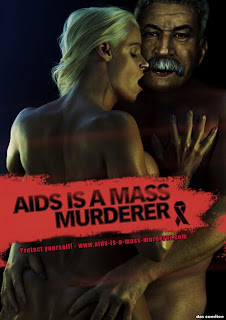 Hey, when a dude's gotta purge, a dude's gotta purge. Not to mention that the chick Stalin's nailing has got one really strange tit. What? Oh come on, this whole article has no class. Much like the ad campaign they're trying to run. I can only work with the material I get and this is crazy shit.

Moving on now, the real perplexing question is if the following was the greatest image to use for the person they decided to suggest it would be awful to have sex with. In it, it looks like AIDS is a grizzled old sea captain Hemingway. Is that the best 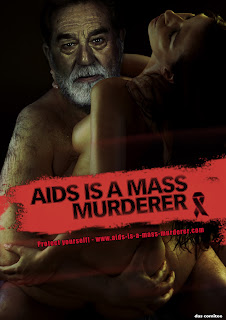 Hell, he sort of looks like the Dos Equis guy. "I don't always commit mass murder, but when I do, I drink Dos Equis.

These photoshops are just simply awful in every way possible. I decided to toss in another. The job isn't steller, but it's what it is for a quick tossed together photoshop. Gotta say, it's just as good as the rest. 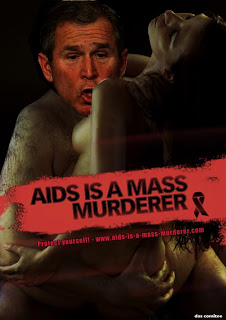 Nah, we all know he's too stupid to ever get any from random girls. Not unless they're hardcore christians (though I'll reserve my taunting of that culture for another blog) But still, you get the point, this campaign really glosses over the point. Yeah, yeah. If you have AIDS you may as well be a mass murderer.

This next ad just makes me wonder why bother trying to break the equality line when it's clear that society isn't going to change. Check this out, Looks and cooking, there's nothing else worth examining or caring about in a woman. This girl has one other asset that makes her valuable - looks. That's how she'll make up for the lack of cooking knowledge or the willingness to learn how to scramble an egg. 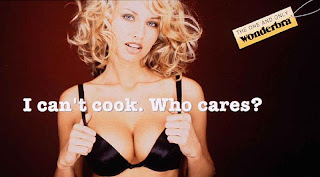 This ad is false advertising for a couple of reasons. First off, Wonder Bras are just lies to both the women and her suitors.

Then you have the ad lying to women by showing a woman with an already full bust wearing the product. There's no way that the bra is creating that without there being some amount of boobs there to work with.

Then you have the final nail. There's really no excuse for not knowing how to cook basic stuff. Even if you're a complete screw up in the kitchen, you have to at least know how to bake. Didn't your parents give you an easy bake oven? Or at least a light bulb and some cookie dough to play with?