Playing Games With My Tru Blood

Playing Games With My Tru Blood

Well what do you know, today is Sunday. Which obviously means that it's True Blood night! You know, that HBO show about Vampires that is sort of like Twilight but less gay and more campy. Yup. That's right, I said it. The books sucked (not in the good way) but thankfully because of the hand of Alan Bell, the show is amazingly entertaining.

Among what makes this show great is the campiness that is involved and of course, the characters. Take Vampire Bill. Yes, he's the only Vampire in this show that actually has the word Vampire in front of it. He's that special. Why, do you ask this is? Well, it's the way he talks. He was turned during the Civil War and it seems that he hasn't changed his mannerisms to adjust to the modern era so whatever he says comes across as being uptight. He's sort of uptight with a heart full of love, even if it isn't beating.

Bill is apparently the only vampire in the universe who refuses to modernize. He's disillusioned into thinking he's "mainstreaming" by owning a Wii, a car, and drinking Tru Blood. He also recycles, so go figure. But in his speech, mannerisms and personality, he's still the same guy he was when he was turned in the 1800s. Vampire Bill is awesome and the fact that his lines sound as if they come out of a late 19th century book is even awesomer.

Not to mention that he's a good boyfriend too. He murdered a chick and had sex with Lorena on a bloody bed while the girl bled out right next to them and I whine when I get dragged to the mall. He runs to Soooookeh whenever she's in danger.. well, except for that one time when his ex was keeping him busy (haven't we've all been there?) But in a recent episode of True Blood Bill was seen taking up time with the always gorgeous Evan Rachel Wood (As New Orleans Vampire Queen) sitting around playing Yahtzee. And though in the game of Yahtzee you roll the dice and try to make a combination of numbers with a limited number of retries not saying much, it still showed Bill getting down to having fun... as much as Bill could have. 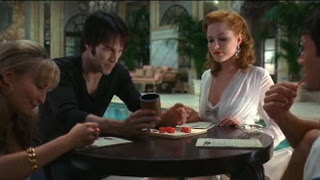 With that said, the image of Bill saying "YAHTZAY!" would have me on the floor, laughing out loud and spitting on my keyboard, as you crazy kids would put it these days. I like the idea of Bill just continually playing board games. Especially if it includes more ERW. But this concept was carried over in the something awful forums with people just inserting their various ways that Vampire Bill would bring new life to these old board games...

DOES YOUR CHARACTER HAVE A BEARD ON HIS PERSON?
No. I HAVE PUSHED DOWN ALL OF THE PLASTIC TABS EXCEPT ONE. I MUST VENTURE TO GUESS THAT YOUR CHARACTER IS TOM. AM I CORRECT IN THINKING THIS?

How about a game of scrabble?

"I ASSURE YOU THAT 'HOECAKES' WAS QUITE THE COMMON WORD IN THE ERA IN WHICH I WAS TURNED. BY MY RECKONING I HAVE NOW ACQUIRED 33 POINTS FROM THE TRIPLE WORD SCORE."

SUKAH I DO NOT UNDERSTAND THIS GAME. WHY WOULD THE DESIGNAHS SIMPLY BUILD A SINGLE LADDAH TO THE TOP AND A SINGLE CHUTE DOWN? THIS SYSTEM DOES NOT CATAH TO A VAMPYRE. 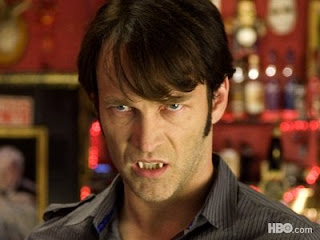 Sometimes the games need to be a little more physical

"WITH THE ACQUISITION OF SPACE B15, I FORMALLY DECLARE BINGO."

What can I say, he doesn't have the smoothest fingers

THE TOWER APPEARS TO HAVE TOPPLED DESPITE YOUR BEST EFFORTS.....JENGAHH.

Oh Eric, when will you learn?
I BELIEVE I HAVE CONNECTED FOUR ERIC. I CANNOT AND I WILL NOT ALLOW YOU TO DEFEAT ME. SOOKAY IS MINE.

Who said collectible card games were off limits?

NO ERIC, YOU MAY NOT ATTACK ME, YOUR CREATURES HAVE THE SUMMONING SICKNESS

He's been around during a couple of wars.. RISK should be a piece of cake to him

"IN MAH ATTEMPT TO CONQUER EUROPE, I SHALL ATTACK ICELAND FROM GREENLAND WITH ALL THE ARMIES I HAVE AMASSED THERE!"

Gum drop fields aren't looking too pretty now, are they? 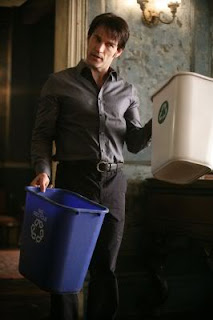 We recycle in this home

Mr. Moneybags has nothing on him

YOU HAVE LANDED YOUR AUTOMOBILE TOKEN ON THE RECTANGLE MARKED 'COMMUNITY CHEST'. AS YOUR BANKER, I COMMAND YOU TO HEAR THE TOP CAHRD OF THE AFOREMENTIONED DECK. "YOU HAVE WON SECOND PRIZE IN A BEAUTY CONTEST. COLLECT TEN DOLLARS." HERE IS YOUR PAYMENT.

Sometimes you just have ants in your pants

I wonder if vampires are very flexible.

"I HAVE MOVED MY LEFT FOOT TO A RED SPOT ERIC, I APPEAR TO HAVE MY HEAD IN YOUR PERSONAL SPACE AND I DO APOLOGIES BUT I WOULD LIKE TO CONTINUE PLAYING."

Who said he's not up for a game of cards?

52 PICK-UP! ERIC, I REQUIRE YOU TO PICK UP THE CARDS THAT HAVE CASCADED TO THE FLOOR.

Ha! This is a battle of wits

I MUST INFORM YOU THAT THE CARD YOU SEEK IS NOT AMONGST MINE. YOU MUST GO FISH.

He's sort of a dick to Jessica

AS YOUR MAKER AH COMMAND YOU TO KING ME

'JESSICA, AS YOUR MAKER AH COMMAND YOU TO BRING MORE ONION RINGS'

Yeah, I think I've just been Glamoured through my computer screen...

AS I DO NOT SEEM TO BE ABLE TO GLAMOUR YOU, PERHAPS YOU WILL CHANGE YOUR MIND ONCE YOU HAVE WITNESSED MY FIVE-STAR PERFECT PERFORMANCE OF "MORE THAN A FEELING" ON THE EXPERT DIFFICULTY SETTING.

Even he goes to arcades sometimes

AS YOUR MASTER, JESSICA, I COMMAND YOU TO TAKE YOUR LVL 1 VALKYRIE AND DESTROY THAT SPAWNING GROUND THAT IS PRODUCING ORCS.

Yup, a real dick to her

I do declare that my torpedo will hit B12

"YOU HAVE SUNKEN MY BATTLE SHIP!"

Rock 'em, Sock 'em is not a concept he is familiar with

"IT APPEARS AS IF MAH BLOCK HAS BEEN KNOCKED OFF!" THOUGH YOU POSSESS THE WISDOM OF 1,000 YEARS IT SEEMS YOU ARE NOT LEARNED IN THE WAYS OF ROCK 'EM SOCK 'EM ROBOTS.

He's been around the block, he would make a good detective

AH SUSPECT THAT COLONEL MUSTARD IS THE GUILTY PARTY TO THIS HEINOUS CRIME, UTILIZING THE CANDLE STICK IN THE LIBRARY TO TAKE THE LIFE OF HIS FELLOW MAN 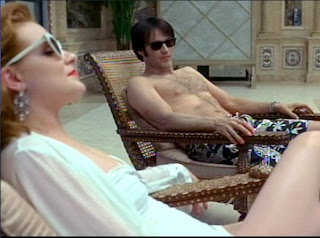 Back to the outdoor fun

YOU HAVE BEEN "TAGGED" BY MYSELF. THEREFORE YOU ARE NOW THE ONE WHO IS KNOWN AS "IT". PLEASE WAIT UNTIL THE REQUIRED 10 MISSISIPPIS BEFORE RESUMING YOUR CHASE.

Strip Poker!
SOOKIEH, YOU HAVE GOTTEN TWO PAIRS OF JACKS AND TWOS TO THE FULL HOUSE THAT I HAVE RECEIVED, YOU NOW HAVE A CHOICE AS TO WHICH OF YOUR UNDERGARMENTS YOU WILL WISH TO REMOVE.

He does what anyone else does on a rainy day

SOOKIEH I HAVE FOUND THE STRANGELY DRESSED GENTLEMAN YOU CALLED WALDO IN YOUR PICTURE BOOK, THEREFORE I AM VICTORIOUS IN THIS PUZZLING ENDEAVOR.

THIS IS STRANGE..MY VAHAMPIRE EYES DO NOT PERMIT MEH TO SEE THE SO CALLED BOAT IN THIS "MAGIC EYE" BOOK. I AM ANGERED THAT YOU CAN SEE IT SOOKEH AND I APPARENTLY CAN NOT. WHAT ARE YOU?

uh-oh, someone's got a game of trouble brewing

SOOKEH ALTHOUGH I MUST ADMIT THAT IT CAN BE THRILLING TO GET INTO TROUBLE, YOU HAVE DRAWN THE ATTENTION OF FORCES BOTH GREAT IN POWER AND FAR BEYOND YOUR RECKONING.

And since he does have a Wii...

SUHKEH, WHILE I AM WELL AWARE OF YOUR ADDICTION TO DANGER, I REQUIRE ALL OF MY GUESTS TO UTILIZE THE WRIST STRAP AND CONTROLLER COVER. I REFUSE TO CONTINUE BOWLING WITH YOU UNTIL YOU ACQUIESCE TO MY DEMANDS. 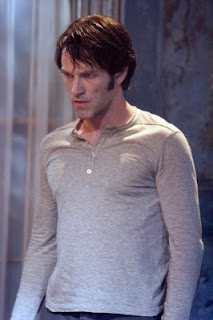 Even if Vampires don't eat food, doesn't mean they can't play as a hungry hippo..

"MY HIPPOS HAVE DEVOURED MORE MARBLES THAN YOUR HIPPOS. CLEARLY I AM THE VICTOR!"

AS YOUR MAKER I COMMAND YOU TO FINISH HIM 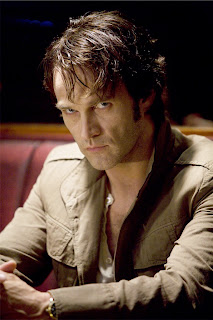 A thrilling game.. of course...

"EVEN SHOULD WE WAGE THIS BATTLE UNTO ETERNITY I FEAR NEITHER OF US SHALL EVER GAIN THE UPPER HAND IN THIS VEXATIOUS DUEL THE HUMANS CALL 'TIC-TAC-TOE. 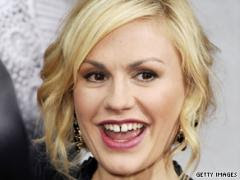 I could drive a bus through the gap of her teeth.

And with that, I suppose I should end the madness. I'm sure half of these were only funny in the drunken state they originally were created in. The others.. maybe partially funny. But what isn't funny is that after tonight, you're going to have to wait a while to see more true blood. Looks like it's the season finale tonight.

So perhaps you should watch. I know if I was a God, I would command my followers to watch the episode. I mean, how the hell are they going to wrap it up in an hour? Oh wait.. they aren't. Of course there's going to be some sort of cliff hanger ending.

Either way, I just know you'll have yourself a bottle of Tru Blood in hand ready to watch this otherwise very campy show.