Well DC has done it again, they produced yet another DCUniverse cartoon. Considering how screwed up DC has had their live action films go into production limbo, it's really amazing to see that they're really on top of their game when it comes to the Animated universe. The last time around in the form of a Green Lantern and Wonder Women animated film, I was blown away on how good they were. This time it was a bit more of a tricky situation. You see, I know my Public Enemy and it's Jeph Loeb. 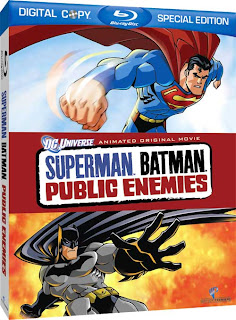 I have to say, Green Lantern: First Flight and Wonder Woman were both way better films than this. But it had a lot of cool moments sprinkled along into it. Not to mention you get Kevin Conroy back doing the voice of Batman and Tim Daly as Superman. Anyone who loved both superheroes Bruce Timm/Dini animated series are going to love this film for getting them back to do the voices of the characters. And yes, you get them back at a cost. That is, you have to pay for it in the form of a Jeph Loeb story. It's literally an hour of Superman and Batman teaming up to beat the living shit out of every DC hero and villain and a little of Michael Bay's Armageddon thrown in for good measure. I thought it was entertaining enough. If I saw this when I was a kid I would have gone fucking nuts. And really, isn't that what the whole purpose of the film was made for? Wont anyone think of the children? 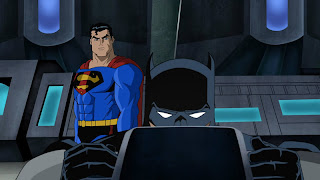 Hell, the battles alone take up a majority of the film. For an hour and six minute film, I have to say that it has about 10 minutes of actual dialogue. The rest is battle after battle with other super heroes. I'm just going to toss it out there. You have Superman battling Shazam!.. though they call him Captain Marvel, and it's pretty intense. Toss in Hawkman and well, if you've read the comic you know how that ends, but it's pretty much a rock 'em, sock'em bout

Yup, the guest list in this film is a who's-who of the DCU. You should expect less depth than your average 30 minute Batman episode and get ready for fights with every single character listed above. When you see Jeph Loeb on the front of a book or production you know that the story is going to be pretty fucking retarded. It has a lot of one liners and the animation, while not true Bruce Timm style, is good enough to remind you of a poor man's Ed McGuinness, the artist of the comic with the same name. Turn your brain off and pretend your watching an animated version of Commando and it's really just entertaining. 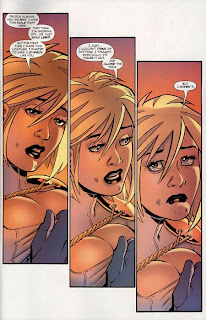 You also have CCH Pounder as Amanda Waller.. and to be honest, whenever I read her character in the comics I always pictured CCH Pounder from her role on The Shield to make a perfect Amanda Waller. You have Power Girl making her debut in the DC animated world as well. Though I'm sure someone will correct me on that if I'm wrong. I suppose I just don't remember any time when her massive power girl tits have been soo... talked about in a childrens movie.

Hell, the first opening to the video is a bleeped out The Daily Show segment letting us know what kind of world we're currently in where Lex Luther is now President. Yeah, that's right. President Lex Luther. Which was a pretty interest story arc in the comic books till Jeph Loeb decided to wrap it all up with this story arc and make him crazy again. 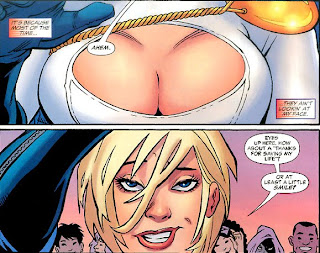 This film was pretty mature, all things considered. Even if you have the stupid elements from the book like the giant robo sup/bats at the end. But even in that, you have a 13 year old boy talk about how he's using X-ray glasses to check out Power Girl's tits. Hey, guess what. There's a damn hole in her costume right on the cleavage area. You don't need X-ray vision to look at them.

Over all, it's a decent Superman/Batman animated film. It has all the things that matter in Daly and Conroy. That in itself should sell you on the idea of this alone. If you enjoy random Jeph Loeb style fighting between superheroes, this will be up your alley as well. In the end, it's not as good as Green Lantern and definitely not as good as Wonder Woman. But it's well worth a viewing.
Posted by Booster Gold / Javier J. at 2:40 PM