This is a repeat post. Not that it takes anything away, it's just that it's actually 9-9-09 and it's 9:09am. So it's only fitting that this gets reposted as it's topical. I present to you my review of 9. A couple of months back I was able to catch a screening of 9 and I here's a little review of it. The Primer to all this is that this film is based off the Shane Acker animated short from 2005. You can see if here if you just press play:


Now, wasn't that amazing? Guess what, you just got the general gist of the film. Since I'm being evil, what with this date looking so much like 6-6-6 in some fashion, I thought I would tease the fuck out of the fact that I've seen a Tim Burton produced film a whole lot sooner than you suckers! Baw-ha ha ha ha.

Still reading? Ok, I guess I didn't scare you off or you didn't click the window close out of spite. In any event, did you happen to notice something familiar with the main character? Something about the design in itself? If you've got a Playstation 3, you may have noticed that he looks remarkably like Sack boy from Little Big Plant. 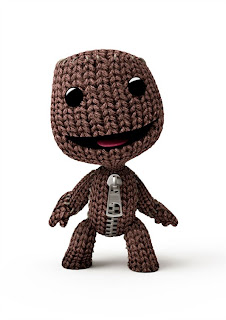 Which isn't a bad thing. It's as if Sack Boy grew up and then went into a world that would scare the living crap out of anyone playing LBP. If your little kid wants to go see this film because they think it's going to be a fun romping adventure in a make believe land.. don't take them. While this is very much like a video game, the therapy bills alone will overheat your wallet like a PS3 does to a room.

Let's move on to the actual film. Tim Burton's 9 is not actually a Tim Burton film. I'm still telling people to this day that Nightmare Before Christmas was not a Tim Burton directed film. It was created by him in a lovely book, but it was directed by someone else who got very little credit. So little I'm not even going to bother changing that now by not acknowledging his name. Harsh, isn't it? See, that's what all you people have been doing.

Wait, I haven't even said if I liked the movie. Look at me just going on. I'm never going to be a critic, am I? Yes, I liked it very much. But if you're looking for a surprise or if you feel like you've seen an entire movie summed up in a teaser trailer before the movie even popped on the screen, that's the case here.

That animated short you clicked on above, that's pretty much the outline of the film plotted for all to see. But in the case of this movie, you don't see it for the resolution. I mean, it's a post-apcalypitic film. What sort of happy or tied together resolution can their be? The destination is not the reward, the journey is.

The film moves just like a video game. I'd be surprised if they didn't come up with a video game for it to be released along side it because it's really a 90 minute video game Video Game Movie. You see sackboy awaken to a world that has been destroyed by the machines that man created. You would think that we would stop trying to build fuckin' robots with all these warnings we're getting from films and tv shows. From that point on you see him sackboy 9 discover others like himself and they get to the bottom of what happened and what their purpose in life is.

Through the adventure you will feel like you're in a video game. Conduct a small task and then face a mini-boss. There's about three of them in this film with the obvious final big boss/big bad being the main bad ass thing that faces sackboy 9 and the other survivors. Much like any video game, the level of difficulty from mini-boss goes up after beating the previous one. There's a scene with a robotic looking crow that is just amazing. That's not even getting into the "final boss" who is huge, bad ass and otherwise scary beyond all belief. 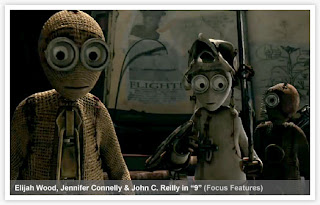 The movie is very stylized and has a feel and dark and gritty look as if someone really demented was designing a little big planet level after reading way too many end of the world books. It has a sort of Fallout meets Little Big Planet feel to it.

It is light years above and beyond modern animation. And while I love stuff like UP, I still have to give this film so much credit for being something different. Something dark. Something that reminds me of my youth with movies like the Black Couldren (which was a Burton film) and labyrinth.

While I'm sure this film wont do gangbusters in terms of Box office income, I'm going to own it. I'm sure the video game will appeal to those gamers who are just getting home from E3.

My final say on this. It may remind you of Little Big Planet mixed with Fallout 3, but it's so worth it just to see how intense and how amazing the action is from "level to level" of mini bosses.
Posted by Booster Gold / Javier J. at 9:09 AM