We finally really did it. You Maniacs! You passed prop 8! Ah, damn you! God damn you all to hell! 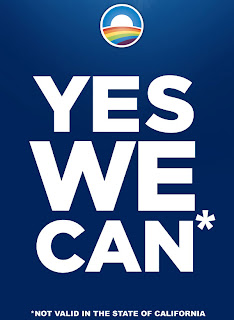 I don't get you people. Yes, that's right I said YOU PEOPLE. Because I, for one, did not vote yes for prop 8. You just had to listen and read my blogs to see where I stand on this issue. It's stupid to strip a group of their civil rights that make them equal to everyone else.

A lot of people have said that Obama brought out the black voters who are to blame for the passing of prop 8. While they got civil liberties and fought for the right to be equal, they turned around and felt the need to deny others of civil liberties.


But I'm not convinced by this logic. You see the final numbers was 52.3 yes and 47.7 no, so you have a 4.6 percent split. the black vote was 10 percent of the electorate and voted 70 percent yes and 30 percent no. if you adjust the totals as if black people had voted the same, or even 50/50, you still end up with prop 8 winning by more than 2 percent.

That still doesn't excuse the fact that someone who fought for civil equality decided to deny others the very same civil equality. But it's not the only reason why it passed. 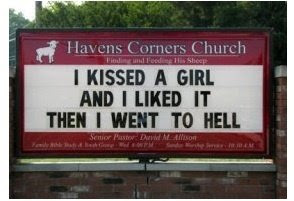 There's also the backlash. Those reap what they sow. In this case El Coyote Restaurant owner, who is a member of the LDS Mormon church is now crawling home with her tail between her legs because, get this, while they're located in West Hollywood, they were dumb enough to not only support Prop 8 but also give money to them.

I have been sick at heart that anyone has been offended by me. I have family, friends, employees from the gay community who are treasured people in my life. I have been a member of the Mormon church all my life. I responded to their request with my personal donation. For years the El Coyote has financially and generously supported the gay community and its charities. 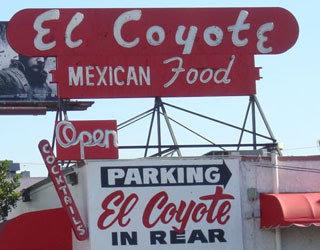 The Salsa is spiced with hate

Of course she's going to be sorry. It's effecting her pocket book. Is there really no accountability? Just because you're a member of a church doesn't mean you need to follow them blindly. Hell, the simple fact that they are serving alcohol or even open on a Sunday means they are not following the church's teaching to the book as those two things goes against the church.

So don't give me this bullshit that you didn't realize that it would have such an effect. Again, the proposition description started with ELIMINATE RIGHTS in it. She's feeling the pinch now because she, along with others, have been outed for giving money to advertise for prop 8. I'm not spending any time feeling sorry for her suffering consequences to her actions. She could have just easily said no when the church passed around the collection plate.

And a quick follow up to this. The event happened and as you could expect, it was a train wreck which will only be followed by boycotts of the place. Why? Because while she's sorry, she's only sorry that she was outed and has no intention on supporting a NO on prop 8 side in fighting this in court. What a fucking sheep. While they have cheap margaritas out of the gun, I wont be supporting a place that takes the profits from my business there and channels it to a church that lives by a double standard. 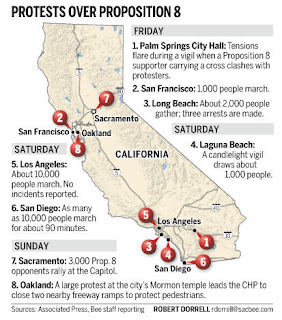 This isn't limited to LDS and the black community. Let's toss some blame to Saddleback Church, which in itself, has a pretty gay sounding name. This Mecca for evangelicals in Southern California played its part in getting this proposition to pass.

Saddleback Church has the pastor Rick Warren who hosted a forum thing with Obama and McCain and then campaigned for prop. 8 hardcore. He also wrote this really dumb book called The Purpose Driven Life which is basically a self-help book with lots of God, that has become one of the best selling books of all time. (I was once given a copy of this by evangelicals fearful for my godless, Californian soul.) Weekly church attendance for Saddleback exceeds 23,000.

Saddleback is a prime example of megachurches at their worst. The Lord apparently likes large plasma screens. 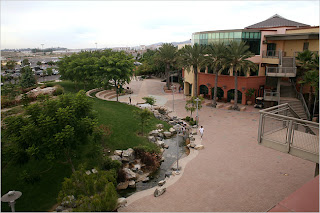 This is the kids center...

"If this had gone the other way, I can't imagine the backlash if people protested and called the other side names," said Purves. "People would be angry and rightfully so. ... It makes me sad that this would happen when a majority of people supported this measure."

"It's disheartening that he is being singled out," said Lisa West, spokeswoman for the church in the Sacramento area. "We had hoped there would be more tolerance for different viewpoints."

"Protesting is a time-honored American tradition," said Ned Dolejsi, executive director of the California Catholic Conference. Catholic leaders were active in the Yes on 8 campaign. "But it's unfortunate when it steps over into religious bigotry or harassment."

Waaaa. Waa aaa, My hateful actions have consequences! No shit, you scum. That last quote really gets to me.

"We had hoped there would be more tolerance for different viewpoints." 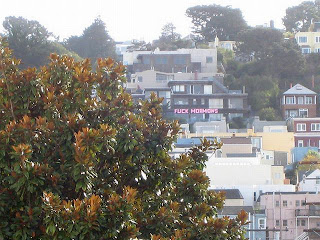 I just never wrapped my head around being against gay marriage. I mean, gay people shop for groceries and that hasn't changed grocery shopping for me. So I seriously don't think letting them get married would hurt anything either. Did I miss some sort of memo sent out amongst straight people on why exactly anyone should be against this?

I would say that we should ban Mormon marriage but if you were to try to practice it as the founder originally intended, it would be illegal as well. Then again, why do you want multiple wives?


The issue has been heating up even after the elections with protest and boycotts. I believe they're justified as it is taking human rights and tossing them out the window. While I don't believe in violent protest, it's not like the religious right is playing this with any tact. The actions of Margie from El Coyote and the video above show that there's either remorse or a strong standing by ones convictions. You can't be surprised if someone slaps your sign out of your hand if you're egging them on like the old lady did with that group.

I can't wait til the California Supreme Court takes this case on and smacks the shit out of the pro-prop 8 people. They tried to go around the Supreme Court. You don't fuckin do that. The Supreme Court is going to fuck them for that, and in a totally gay way.

When this gets overturned it will be even better than if it had been defeated in the first place. Not only will these people have accomplished nothing, but they will have bankrupted themselves in order to do so
Posted by Booster Gold / Javier J. at 3:57 AM