It's a wonder that Pixar keeps cranking out such great movies. Though, I have to admit that this is my new favorite Pixar movie. I feel like I say that with each new movie, but it's true with this one. Holy hell, that was a fun adventure and it ripped at your heart.

One thing that really surprised me was how well the back-story for the old man was written and told, albeit i think this is one of those kids films where I might feel uncomfortable taking young children. The first ten minutes of this film are touching beyond all belief. If you're not crying by the end of the montage, you're not human and should just unplug your robot heart. 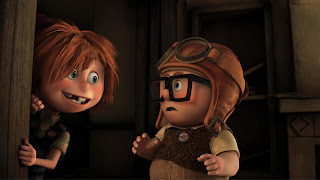 The story is about Ellie and Carl, two fun loving adventures who meet at a young age and just grow old together. I really can't do justice in words in how wonderful and how sad the opening made me feel. I'll let you go see the film and feel the same. Suffice to say, in his later years after losing his partner in life, he decides to go on the adventure that the two of them never had the chance to go on and away he goes lifting his home up with balloons.

The people at Pixar just know how to make a movie that people will care about. You care about the characters, you care about the surroundings, and you notice the changes that the characters go through the movie. That's another awesome thing that Pixar does, they create some of the most believable character arcs. In every single Pixar movie, the main character is changed in some way, and, again, in every single Pixar movie, there's no suspension of disbelief needed in regards to those changes. They know how to tell a complete story. 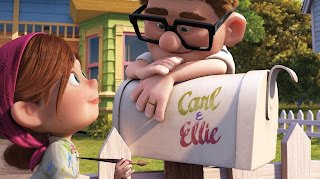 Something thing about Pixar is that they like to toss in stories. Toy Story had this message that on how to share and how things change around you and you need to adapt. Considering Woody had to adapt to the change that Andy was growing out of Cowboys and into Space Cadets. Bugs Life, another favorite of mine was all about socializing with others you normally wouldn't have in order to save the day.

Cars was about red-necked tow trucks or something. I don't remember. Wall-E was all about going green and so on and so on. The point is that they tell a story that not only kids can enjoy but that parents love to enjoy with their kids. That's the smartest thing possible and it leads to not pandering to children for a quick buck but giving some lessons in an entertaining manner. 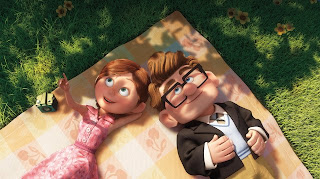 Visually the movie was beautiful, really they have genuine artists at Pixar. From the style behind every object and character, to looking at how rooms were decorated or colored and then all the nature entire landscape scenes, everything was superb and it made it feel as though I was watching something more then a movie. It's kind of hard to describe other then visually poetic. I also loved watching the little facial expression nuances in each of the character.

As for the 3d, loved it. It was interesting watching the trailers shown in 3d before the movie started. Most were obnoxious, over the top, or disorienting from all the motion (other then the toystory3 teaser). I was kind of worried until the movie started. How they used it to gave fullness and life to objects rather then novelty purposes and I think was near perfect. I wouldn't want them to change a thing. 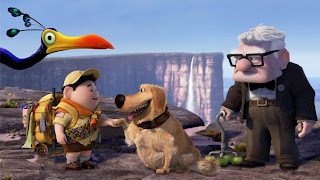 Dug was so cute. I want that dog. I think I would actually buy a Dug toy if it talked. Well, what am I talking about. This is Disney after all, of course they made the toy.

And for those of you looking for easter eggs, try to see where you can find the Pizza Planet Truck. It is a Pixar movie, after all. There's a constant law in Pixar films to have cameos and have a character voiced by John Ratzenberger.

In the end, and I mean that literally, Carl sees the final message which is particularly powerful because they didn't really need the grand adventure to South America anyway. Ellie was content with the adventure of their marriage alone. It's striking since it basically tells the audience to enjoy the adventure of their lives now and not to dwell on the regret of what they could not accomplish in life.

If I can only convey my opinion ofthis film in one image, it's this 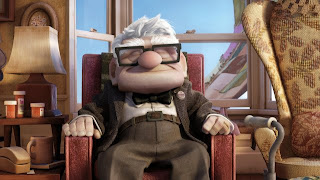