Living Without A HomePage

Living Without A HomePage

Over the weekend I passed through San Francisco. It's a strange place. Well, a strange place with good Clam Chowder and an amazing Chinatown. As well as any other strange fact you can bring about how progressively forward a place is that charges you $6 to get in via the Golden (actually red/orange) Bridge, you have to give it credit for being unique. I mean, where else can you be On the Street and On Facebook: The Homless Stay Wired

SAN FRANCISCO -- Like most San Franciscans, Charles Pitts is wired. Mr. Pitts, who is 37 years old, has accounts on Facebook, MySpace and Twitter. He runs an Internet forum on Yahoo, reads news online and keeps in touch with friends via email. The tough part is managing this digital lifestyle from his residence under a highway bridge.

"You don't need a TV. You don't need a radio. You don't even need a newspaper," says Mr. Pitts, an aspiring poet in a purple cap and yellow fleece jacket, who says he has been homeless for two years. "But you need the Internet."

Mr. Pitts's experience shows how deeply computers and the Internet have permeated society. A few years ago, some people were worrying that a "digital divide" would separate technology haves and have-nots. The poorest lack the means to buy computers and Web access. Still, in America today, even people without street addresses feel compelled to have Internet addresses.

I'm a little confused by this news piece. I mean, since when did we worry about the homeless in this country? I kid, I kid. You know me. I love the homeless. Who else can you hear crazy stories from and not have to care after talking to them? 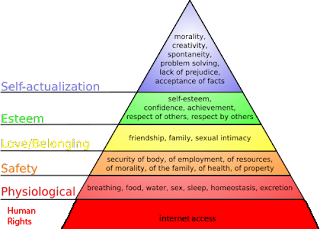 But more so than anything else, I'm not sure what to take from that. See, this blogger is at a loss on this issue. Can someone please interpret this news piece. Is it:

bonus question's:
5) how do you think web 2.0 affects homeless? who is your favorite homeless tweeter?
I'm leaning towards this one from a Poet named Charles
6) how many of you are homeless in San Francisco right now???

I know what you're telling yourself. This dude doesn't sound very homeless. I don't think you people understand how much it costs to live in San Francisco. Then again it seems like there's different levels of homeless and some of these must simply be kinda homeless. 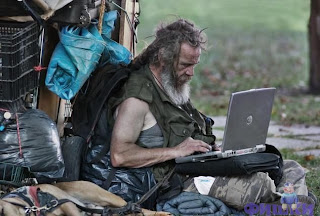 I guess this goes to show you that a notebook and internet access are everything one needs to bootstrap oneself. Just learn to program or web design, maybe take up journalism blogging, and even a homeless person can have a revenue source. I guess no one told you Marxist that the concentration of the means of production isn't what it's cracked up to be.

Then again, they're more than likely setting up craigslist ads like the following:

Missed connections>california>los angeles>skid row
saw you sleepin by the shelter on third street, got a cardboard hut and i need someone to suck the stink off my dick, must love dogs.

I'll move to a heart warming story: I was walking up market st and there was an old woman pushing a shopping cart filled with paper bags. as I was walking behind her I noticed she was stopping at every homeless person she passed and handing them the bags which were filled with sandwiches and chips. Sure, it's not an internet connection, but it's a start.

But forget the homeless, if you are ever in Berkeley and run into one of these people you should avoid conversations with them. 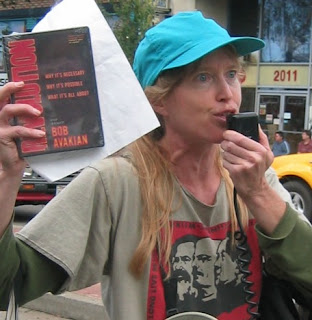 Now that's a person who shouldn't be on the internet at all.
Posted by Booster Gold / Javier J. at 3:50 PM