So E3 is over. I had a trip and then I'm on a trip now. But that doesn't mean it gets a free pass from me and my judging because I'm a pretty far distance away from it. This year there was a lot to make fun of so how could I pass up a chance at mocking it. I am a fan first, right. If there's a god given right to all fans of things, as star wars has taught us, is that we should have high levels of expectations for them so they clearly are never met and we can clearly mock even more.

This year EA is releasing a game called Dante's Inferno. A game based on a book no typical gamer has read but they all know stuff from it. You know, various levels of torture and punishment. OMG! HELL! Well, clearly a game about hell would get people up in arms, right?

Here's some protesters in LA against the new Dante's Inferno game: 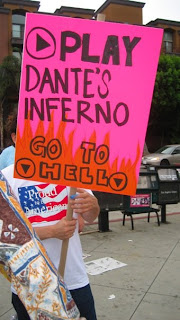 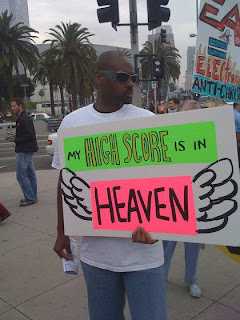 OH NOES! QUALITY WRITING AT THE LA TIMES! IT MUST BE THE END OF DAYS

It isn't all playing games and doing business at E3 this year.

A small group of 13 protesters had attendees gawking by one of the entrances to the Los Angeles Convention Center. The object of their ire? Electronic Arts' upcoming video game based on the literary classic "Dante's Inferno," which is on display at the show.

The protesters, who came from a church in Ventura County, held signs with slogans such as "trade in your playstation for a praystation" and "EA = anti-Christ" as they marched and handed out a homemade brochure that warns, "a video game hero does not have the authority to save and damn... ONLY GOD CAN JUDGE. and he will not judge the sinners who play this game kindly."

Matthew Francis, one of the protesters, said he and his fellow church members were particularly upset that Dante's Inferno features a character who fights his way out of Hell and uses a cross as a weapon against demons.

"We think this game should never come out," he said, before asking a reporter to convey his message to executives at Electronic Arts inside the show, where non-industry professionals are not allowed. 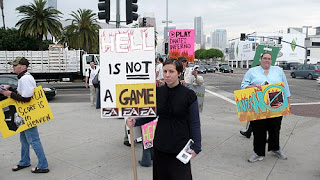 The first thing you would ask yourself is if they understand and know that Dante's Inferno isn't actually in the bible or much of a bible story in itself. But then I'll simply answer that no, I don't think the EA rep who hired them mention that.

I like how the L.A. Times proves me right once again in how awful they write their paper. You mean to tell me that they couldn't look up this info before their paper went to print? EA must have had a press release for it. I remember my time there at E3 to be loaded up with press releases for simply giving them a business card. I guess the L.A. Times doesn't have the budget for little pieces of paper. 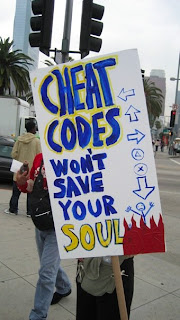 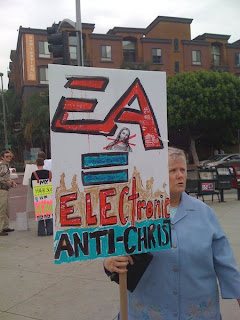 So what gave it away? The fact that protesters wouldn't bother to accurately reproduce the logo of a corporation they are protesting against, let alone emblazon it repeatedly on their signs?

Or perhaps the fact that this is E3. I doubt many bible thumpers are all into video games to the level of wanting to keep up with what's happening at E3. Or perhaps that this is e3, as with every year, publicity stunt become the norm.

But what about EA in all this. I see EA picked up Acclaim's "Let's all be retarded and they'll buy our shit" marketing department. They were the people who tried advertising on tombstones, right? Can't wait for the "Show pics of yourself being crucified and win a ree copy!!" promotion.

Personally, I can't wait to wander through the malebolge and chit-chat with old popes. That's if they make the game as accurate as the book
Posted by Booster Gold / Javier J. at 6:45 AM