77 Ways To Turn Down Weed

The 77 Ways To Turn Down Weed

So you might have seen it in the news lately that Choomgang Obama stated that he's pulling back the forces on the war on drugs and those states that have medical marijuana shops wont get hassled by "da man" so much. You may think this is a good thing. I personally, as a non-smoker, don't give a fuck, but I can see how this may be a problem for some people.

Chances are you know someone who scammed their way into getting a medical marijuana ID card and is taking full advantage of that new found KFC+ down the street. Only, you may not want to smoke the devil's herb. So now that the chances increased that you'll be faced with the situation of having to turn it down when offered to you, what ever are you going to do?

Don't sweat it, homie. I got your back. You see I'm captain cool and you're part of my cool squad now. We'll both combine forces and figure out a way to turn down those drugs with the helpful use of this PSA poster that offers us 77 ways to turn down the reefer madness! 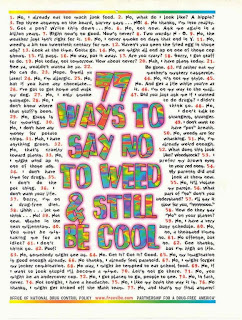 If you're too stoned, let me help you out. You simply have to click on that picture and it'll get bigger. Wooooah. I know. Pretty fucking crazy, man. Just chill out now. It's not going to grow to the size and crush you. Just try to focus on the letters and read slowly. In all seriousiness, this poster is all sorts of bullshit. Let's go down some of the suggested methods to turn down drugs:

76. No thanks, I might get kicked off the math team.

Wait.. what? Poof? Isn't that a term for gay folks? I bet the poor artist tasked with making this slid this one in for a laugh. Can't be real. Maybe there are just not 77 reasons not to smoke weed. In fact, there's not one reason not to smoke weed other than the basic. You just don't want to.

Yes, this phrase will allow you to turn down weed while keeping your dignity. No way the person offering weed can turn this against you, no sir. They certainly wont tell you that you're a fagot who would rather put a dudes dick in your mouth than put a fag in there. Oh wait, that's a lot of the same thing.

Or perhaps you could just say "naw not today, i'm looking for a job" and everyone will instantly understand and leave you alone. It's not like someone wants you to smoke some of their weed and not get a job. You realize that while they're smoking pot, they can still make the connection that if you get a job, you can potentially be one of the people who they sell pot to. Or, you know, the ever so difficult "Thanks, but no thanks man".

You know, every weed smoker I know wouldn't bat an eye lash if you turned it down. Do you know why? Because it means MORE FOR THEM. Let's make up a couple to go beyond the 77 reasons..

79. Do you think I want to be a loser like Carl Sagan or Charlie Parker?

81. I don't have the money to rent the Matrix right now

82. It's a gateway drug and if my computer is any indication, I hate gateways

83. I already killed a bowl a couple of hours ago

84. Yeah, but can I borrow some of your piss for tomorrow?

Now to close this out.. here's a Lemur getting high as fuck