Yes, it's Monday and you actually made it through the day. I know, Mondays are one of those things that just have to exist. It's the bane of everyone's existance but how else are you going to get the week started? Besides, you get a special treat tonight... an old/new episode of Fringe. Oh, I know what you're going to say.. You watch Fringe now? Yes, it may come to a surprise to some, but I've gotten into it a bit over the last week or two.

For the longest time I didn't give Fringe a shot. I would watch one or two episodes, but considering it has a large subplot running through it, I wouldn't really pick up much other than the monster/illness of the week story. Don't get me wrong, it was some what interesting, but I wasn't ready... to love again. 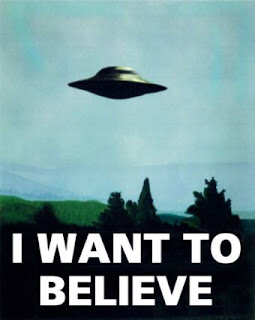 You see, I was a huge X-files fan. I own the series and have seen them at least 2-3 times each. So why while it comes to no surprise that I would be interested in Fringe, I felt that it was a bit too much like the X-files. Not only that but it's J.J. Abrams and I have a love/hate relationship with his work. Then you have to pay attention to the J.J. Abrams shows for patterns. This makes the second JJ Abrams related show in which a shape shifter steals an important character's identity. Someone should comb through old felicity episodes for clues.

Besides that, let's put it this way, I invested a lot into the X-files. It was a love affair.. one could say it was my first adventure into love. The love of the paranormal. I was a susceptible youth. Wide eyed and full of awe at the idea that we weren't alone, that big brother was out there and that I wasn't going crazy in thinking those thoughts about the strange underbelly of our world.. 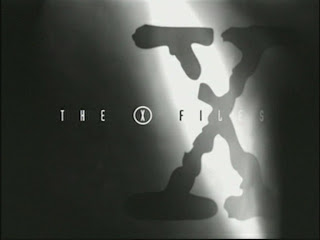 This love took me along on a fling that lasted 7 good seasons.. But then it got ugly. 2 seasons more were just heart breaking and emotional destroying times that I regretted.. but yet still had feelings for this show. 2 films later and I can finally have some closure on the relationship. It taught me and was my role model for a healthy relationship... which is probably why I screw up most relationships. I mean, seriously Mulder and Scully. All those years and you're worse than liberachy with keeping your emotions to yourself. Only to later donate sperm to have a kid? No wonder Mulder is in Californiacation. All those years chasing aliens and his sister would automatically cause Mulder to become a sex addict.

But don't you get it? Maybe I wasn't ready for Fringe because I'm wasn't ready to love the paranormal investigation genre again. My heart's still tender... And then you want me to get in bed with J.J. Abrams? I think my rocky relationship between lost becoming a shambles but Star Trek being an enjoyable romp in the Trek universe has left me.... confused to put it mildly. Is J.J. just that abusive ____friend who will treat me like shit but I'll keep running back to him for more? Didn't I get done with that after X-files? Am I just repeating the same mistake over and over again? The truth is out there... 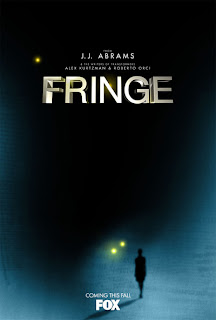 But I did it anyway. Mainly because it was recommended by the lady and well, I wanted something new to watch after going through various other comical series. So now with this new episode that is shown tonight, I can say that I'm all caught up with the story thus far. I suppose that means I get to maintain a high nerd count in my genes.

I do have to say though, the thing about "The X-files" was that the series always made sure to keep Mulder and Scully isolated, so that their reports could always be dismissed as kooky nonsense. This could have been done to keep the budget lower and not need massive city wide special effects, but it did keep the idea out there that creepy things were on the verge of discovery and powerful forces were bent on their suppression. Opposed to creepy things being discovered and everyone just essentially shrugging their shoulders. 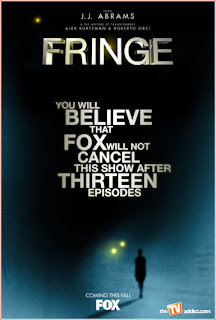 It does take away some of the "oh wow" factor when something like the multiverse shows up from your comic tales to the television screen and the fantastic just happens to seem mundane for the characters. It's sort of like in Buffy and Angel when the apocalypse would happen ever other week and normal people just went about their business. Not saying there's anything wrong with it, it's just an observation.

That's not to say that I'm not shocked by the show. I mean, think about Walter alone. I still can't get over how insanely evil it is to steal your own kid from yourself like he did. Walter is so deceptively charming and adorable, but he had to know how what he did would affect the other Walter because he himself was going through the exact same thing. But I guess it's also incredibly childlike in the sense that it's selfish in a way that doesn't consider the consequences at all, and kind of embodies a love for and dedication to Peter that's admirable like other things about Walter are indefensible but also admirable. 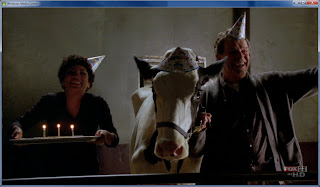 But I'm sure stealing Peter really fucked up that alternate universe in a major way that we'll see in the remainder of this season. Just think about Universe-B Walter. It actually makes perfect sense on who is going to wreck shit up. Who else would have the motivation to be going through all of this trouble just to fuck up our universe? He wants his son back. Our Walter opened a hole in a universe to replace a kid he lost. Universe-B Walter is probably willing to do the same to get his kid back. Plus, he's proably out-of-his-mind angry so he wants to wreck some hell on our universe for that action. And from a storyline perspective, it personalizes things and keeps it more interesting. As opposed to "generic war between universes".

Just think about what the clues were from season 1. Walter casually mentioned that he built the plug that closes dimensional gateways "to keep anything from coming back through" which didn't mean anything at the time, but indicates that he was probably afraid of his Universe-B self following him back over. The Observer did say that there's more than one of everything. Back in St. Claire's, he did start hallucinating of a malicious version of himself. But really, it's a foregone conclusion because the dramatic potential (and possibly comedy potential) of another Walter is too great, especially when the actor doing it is as good as John Noble. 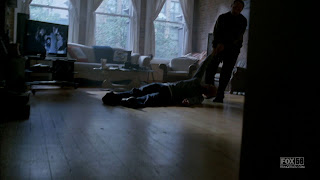 But to add even more connections between the two, FRINGE is now filmed in Vancouver and it'l be interesting to see if they recreate shots in the actual locals of X-files episodes as they love to reference the old show. Just in the season opener you had a screen shot of an X-files episode in the background on a TV. Then you have the U.S. higher ups saying that the Fringe division was nothing more than a new name for that X titled department.

Just take a look at the picture above and the one below. Can you see where the picture in picture occurs? It doesn't take a team of paranormal activity detectives to figure out that they're at least tipping their hat to the old classic. 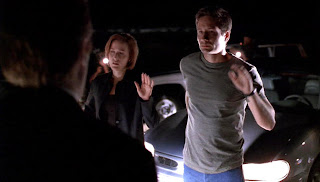 So maybe.. just maybe I am ready to love again. I don't know what these feelings are. A little excitement every time I see the show.. wanting to watch it till the wee hours in the morning? Surely these are all signs that this is an unhealthy relationship doomed to fail.. mainly because it's J.J. Abrams and it'll peter out by season 4, but I'll jump in.. I suppose. Don't hurt me, Fringe, I bruise easily.

Oh yeah. I didn't even touch on a Fringe worthy investigation. Why is it being shown on Monday night? It's a Thursday staple, right? Well, it seems that Fox is testing the waters to see if the lack luster enjoyment of Heroes can mean that moving Fringe on Monday as a lead in to 24 can be something that they can work off of. Which is odd because Monday night is already a pretty busy week night in terms of Television. Even odder is that this episode tonight is a left over from season 1. Production shooting laws meant that they had to produce one more episode than Fox was picking up for the season, so this one is going to feel very out of place. You better get the Fringe team on top of this one.

With that, let's take a moment to remember those that are no longer with us a season and a half later.. Yes, it's time to look back to the fallen characters of this show..


Goodbye Mr. Papaya. You truly are the friendliest of fruits.
Posted by Booster Gold / Javier J. at 4:23 PM