Forget the hoopla about Jay Leno and NBC bending over Conan and pushing him and the Tonight Show to become the Midnight/Morning Show, let's take a look at prop 8 news.. yet again. Yes, this stuff is in the news and I'm still raging against the idea that gay rights.

In recent news, Prop 8 appeals are finally going to go to the court room to see if it violates the rights of others.. let me clue you in.. it does. But in this case, it seems that The Federal Trail will be Televised...

The federal trial on the constitutionality of California's same-sex marriage ban beginning next week will be videotaped and uploaded to a video-sharing Web site, the presiding judge ruled Wednesday.

Chief U.S. District Judge Vaughn Walker, who first floated the idea of broadcasting the highly anticipated proceedings live several months ago, said he decided instead to have court employees record the trial for delayed broadcast on Google's YouTube Web site.

Walker did not explicitly say why he favored a system that could keep the proceedings from being aired for hours instead of one that allowed for simultaneous broadcast. But he said he felt strongly that "it's important for the transmission to be absolutely within the court's control."

The governing body for federal courts in the West recently approved a pilot program that would for the first time allow cameras in civil trials being decided by judges.

Walker said the case's national importance was one of the reasons he was keen to have the proceedings recorded and viewed by as many people as possible as a giant civics lesson.

"I always thought that if people could see how the judiciary really works, they would take a somewhat different view of it," he said.

The plan that Walker outlined Wednesday needs to be approved by the chief judge of the 9th U.S. Circuit Court of Appeals, but such approval seemed likely since that same judge announced the pilot program a mere weeks ago knowing of Walker's interest in having the gay marriage case viewed by audiences outside his courtroom.

Lawyers representing the sponsors of the state's voter-approved gay marriage ban, known as Proposition 8, opposed broadcasting the trial in any form, arguing that witnesses might be intimidated or harassed because of the high emotions surrounding the gay marriage issue.

Walker said he would consider requests at trial to black out the video if individual witnesses object to being recorded.

A coalition of print and broadcast news organizations, including The Associated Press, had encouraged Walker to let a single broadcast media company record the proceedings and make them immediately available to other news outlets. But Walker said he wanted only court employees sitting behind the three video cameras that would be set up in his courtroom, in part so he could decide to pull the plug on the broadcast experiment if it turned out to be interference or a distraction.

Burke said it was his understanding that staffing and equipment limitations ruled out a live broadcast.

"I did not hear anything from the judge suggesting that's a delay he wants," Burke said.

when i first read about this i thought it would be something like a local trial, not a federal one. The trail starts on Monday, January 11th. But I think it's incredibly funny that these people who are opposed to giving people the same rights they have (fuck you, got mine) that they don't want anyone to see their faces as they spew out their hate. One of the major reasons why it passed even though polling showed that people who were asked were saying something that was politically correct because they were asked point blank, but would gladly vote away the rights of someone else when the ballot curtains are closed.

Being that I worked during a couple of elections, I can tell you that someone's reaction vastly changes when they don't have someone over their shoulder looking at what they vote for.

I'm just curious as how this is going to go down. Is there any evidence that federal judges rule along the political lines of the President that appointed the? Because this federal judge that allowed this to be televised was appointed by Bush. I mean it's a given that SCOTUS judges go down party lines, but there are a fuck of a lot of federal judges to try to get party loyalty out of.

Besides, it's been 20 years and he's from SF. Allowing the trail to be broadcast at all is a good ove and makes me think he's a bit more liberal than he lets on. There's this case he presided over involving the NSA, in which he ruled against them and their state secrets. So I gotta say, today I learned of a new hero. Booyah. 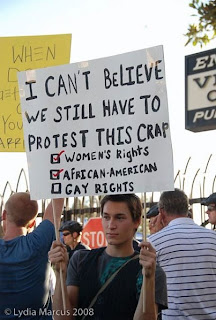 But back to these assholes who want to get rid of human rights.. Yeah, gee. Thanks for spending millions to advertise outright lies to get prop 8 passed, church of latter day saints. We all know you're trying to draw attention away from the facts that Joseph Smith was a con man and Utah is shit, but to deny someone the ability to be miserable is something you don't have the right to do.

I'm glad they'll televised this. I mean, is there any reason why not to? Other than to hide behind the court room with your hate for others rights? Many supports claimed that having cameras in the courtroom would violate federal court rules and would intimidate witnesses. Um, perhaps you shouldn't be afraid of your own message. Unless it's one that you know will be hated. Hell, I talk a lot of shit in this blog but I never back down in being able to be open and saying it. They even filed a motion (.pdf) to withdraw from the case, citing fear for his life. That's a true test on how unjust and against civil rights your cause actually is.

Will this end the unjust lack of marriage between homosexuals? Not really. If anything, it's the start of another long battle. Even if they win in this appeal, if the religious side loses they'll just send it to the supreme court, which doesn't really favor or lean towards granting them the right for marriage. 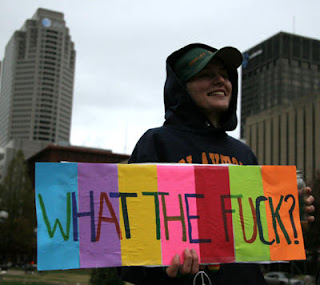 So let's see how this plays out. But god damn, I can't help but enjoy seeing these religious fucks who want to take the rights away from others act as if they're being treated unfair. Talk about ironic as all fuck. So to all you who are hiding behind some laws to protect your rights to destroy the rights of others..