State of the Union: Let's Get Real

State of the Union: Let's Get Real

Well today is the day. Obama is going to to tell us the state of our union. Let me give you a little clue on what it's like.. FUCKED. But really, I can't blame Obama here. The dude is dealing with the shittiest hand of all. Yeah, he didn't keep his promise to close Gitmo. He's not only a Politican and I should have known better - But he's also a guy and since I like to consider myself a guy (except on the weekends, you know why, RHPS crew down on Santa Monica Blvd.) and as a guy, I should have remembered that we NEVER keep our promises.

Tell you I'll show up by 2? Pffft! Make that more like 4:30. Am I rite, guys? Yeah, that's what I thought. I suppose if anything I'm less disappointed in Obama and more disappointed in the mess he has to clean up and the political environment in which he is forced to operate - I mean, have you SEEN the statistics on how much the filibuster is being used now compared to the 80s? They're riding that sucker like if it was a Honda Accord. Only stopping to make sure it has enough oil to keep on trucking on.

If you actually expected Obama to be anything else but what he is, you're dumber than hell. You should already know he's opposed or at least doesn't want to touch gay marriage with a ten foot... well, let's not be graphic here. But yeah, this whole Hope and Change thing.. It don't come easy and it sure as hell doesn't come when you have a shit system to begin with. I'm sort of expecting tonight's speech to go a little like this:

I mean.. if this is true, not trying anything just got Haggis from not being banned in America. Not because it's actually good. No, but because we can now safely eat Sheep's throat. And yeah, one in five Americans think he's constitutionally disqualified from being President due to some stupid birth certificate, but they gave him a nobel prize and somebody is making an action figure of him. How cool is that?

Yeah, hindsight is 20/20. It's not like you were shortsighted and fooled by marketing gimmicks at all. That'll happen in 2012 when the special interest of corporations can finally toss their money at whatever campaign they want without any limits. I can't wait to see President Scott brown with V.P. Sarah Palin. Brought to you by Coke, Intel, All the major gas companies, Ford Trucks and the fine folks at G.E. if they could screw up late night television, they can screw up the next election. 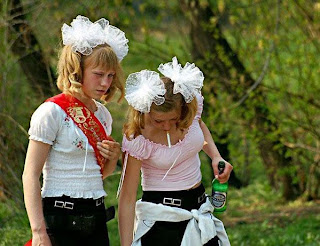 Our nation in a nut shell.. But shit, I'd be lying if I would say I didn't want to kick back with them girls. They look like cool peeps.

But I suppose people were just hoping for anything different than the previous eight years worth of leadership, among other things, and it made Obama appear a lot better than he was. Sort of like that old Eddie Murphy bit about a guy not having sex for a while. When he eventually does he acts like it's the best god damn sex ever. We just didn't have very good leadership for a while and the idea of this super awesome president got the best of us.

I mean, we can't even find out the names of the people who signed off for the bail out till 2018, ten years after the bail out.

The SEC, according to an email sent by a New York Fed lawyer on January 13, 2009, agreed to limit the number of SEC employees who would review the document to just two and keep the document locked in a safe while the SEC considered AIG's confidentiality request.

The SEC had also agreed that if it determined the document should not be made public, it would be stored "in a special area where national security related files are kept," the lawyer wrote.

Yeah, I know. By now everyone has just given up caring and by 2018 no one will even remember or be outraged by this shit. Most likely the world would be much different. In the midst of World War III sort of gives you that clarity of not caring about some silly bankers who were first against the wall. 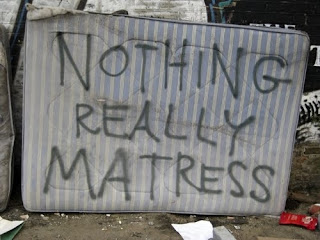 I mean, it's not like corporate America or the media gives a shit anymore anyway. Why hey, I'm the corporate media and I'm just gonna keep on pretending that the Republican party is a real political party with actual sensible opinions and plans and not simply a scam run by corporate interest and insane cult leaders parroting a few market-tested codewords

I like to think that I have a proper balance going on. The key is a careful balance between not giving a fuck to keep your sanity intact and caring to keep yourself from becoming a cynic. I mean, with news stories like this where all the evidence of the the death of the Weapons inspector who blew the whistle and called bullshit on them having WMD's, getting a gag order so that the evidence in solving said case isn't touched for 70 years... How could I not be a little tainted? 70 years... Fuuuuuuuuck. God damn. 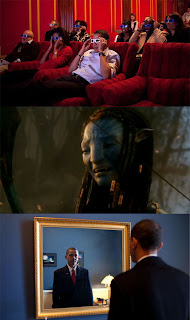 Then moving on to the next big issues. I wonder if Obama is going to touch on the economy and job creations. We should be happy right now, right? there's slightly less unemployment going on in the nati- Wait, what's that? Walmart is about to lay off 11,200 jobs? fffffffuuuuuck. Thank god they don't have a union or poor walmart wouldn't be able to stay competitive in these tough times, right?

Jan. 24 (Bloomberg) -- Wal-Mart Stores Inc., the world’s largest retailer, will eliminate about 11,200 jobs at its Sam’s Club membership warehouse clubs as it hires an outside company to demonstrate products.

About 10,000 demonstration employees, most part-time, will lose their jobs when Shopper Events takes over sampling, Sam’s Club Chief Executive Officer Brian Cornell told employees today in a memo. The company also is cutting about 1,200 membership recruiting jobs, or about two in each of the club’s U.S. stores.

And yet Costco still treats their employees better while maintaining a higher profit per square foot? Huh, odd. I simply get a crack up whenever I think about how Walmart puts their employees under a daily song/dance routine. It's like a beautiful cherry on top of a giant shit sundae that is how they treat their employees.

"not only are we going to pay you crap, fire you if you think about organizing and encourage our store managers to get you to do tons of off the clock work but we're also going to make you physically humiliate yourselves every day just because we can toodles" 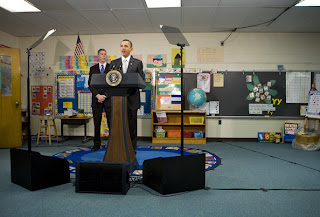 But really, it doesn't matter if some jobs are being put back in. There simply isn't going to be a big enough demand for jobs in the next few years that will get us off our ass again. We're pretty much fucked for some time now. But then again, this isn't Obama's doing.


What I'm trying to say with this blog post is that our economic and political situation sucks ass, but that doesn't change one important fact of life.. And that is that Henry Belafonte fuck'n rocked the house!