Osama Bin Laden? Yes, much like Carmen Sandiego, we're still looking for that pesky terrorist who plotted and called for the attacks on 9/11 (Hope you haven't forgotten about it) I mean, it's been almost ten years since the attacks. I'm not even sure what he looks like anymore. So in an effort to keep us all in the loop on how he looks like in case we see him at the local Whole Foods buying some blood oranges, the U.S. Government has given us a computer generated image of his new look.

WASHINGTON -- The U.S. State Department has updated its 1998 file photo of al-Qaida leader Osama bin Laden, digitally altering it to account for a decade of age and possible changes in his facial hair.

There is a $25 million bounty on bin Laden's head for the Sept. 11, 2001 attacks and the 1998 U.S. embassy bombings in Tanzania and Kenya. Bin Laden is now 52. And he is believed to be hiding in the lawless Pakistan frontier bordering Afghanistan, though his exact whereabouts have been unknown since late 2001, when he and a small contingent of body guards walked out of the Tora Bora mountains, evading air strikes and U.S. special forces and Afghan militias,

The photos and bounty on bin Laden and 41 others wanted for terrorism are on the State Department's Web site,http://www.rewardsforjustice.net.

So, I bet you're wondering what Bin Laden looks like these days. Wonder no longer. Thanksf or the high tech do-hicky, here he is; 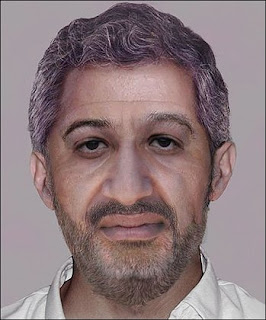 Just look at the guy.. It's no wonder we can't catch him. Because we are spending time and resources making shitty conjectural photos. A trillion dollar budget and we can't even hire a good photoshopper? That image looks like it was made with the source engine from Half Life 2. I mean, that guy just looks like a grandpa that will take you out fishing and for ice cream.

If anything, that's just a product placement right there;
Just for men touch of gray let's in a little gray, allowing you to look like you know what you're doing... and till be able to do it.

Thanks for the updated pics, U.S. Government. I will keep my eyes open... Why can't we face it, the dude has to be dead. We need to get over this need for satisfaction in terms of justice being served. Hell, we can't even get the "Freedom Towers" built, so what luck do we have on ever getting over it without the blood of this man on our justice systems hands.

Is it that we're just looking for closure on this whole matter? Because he hasn't sprung any other attacks on us. So it's not like he's a threat. I'm not saying that we should just forget what he did, but let's be realistic here. We're not going to find this guy. I also have to wonder how does he get dialysis and still look like that? I mean, yeah, there's always his secret underground cave fort. 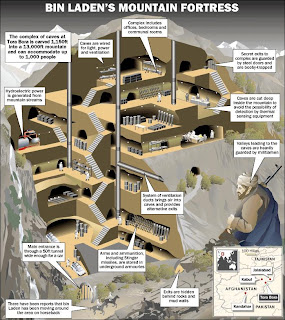 There's gotta be room for a dialysis machine in there. Plus you ave to remember that there is not one of those, there are many of those... as we were reminded all that time on those news outlets

He also probably has one disguised as a mobile weapons lab for when he used to visit Saddam. Seriously, how did we ever end up believing this crap? I think that the best part is that it take up the ENTIRE MOUNTAIN. No space goes unwasted. They should get TLC out there to see how they took Trading Spaces to school with that upgrade.

You'd figure the time and money and logistics required for this sort of job would be on par with building the great wall of China without anyone, you know, noticing what that big fucking construction project was. But I guess it's more palatable for Americans than the fact that the stinger missles are just in the mud hut equivalent of a garage.

That mountain fortress always makes me think of this Life in Hell comic strip. 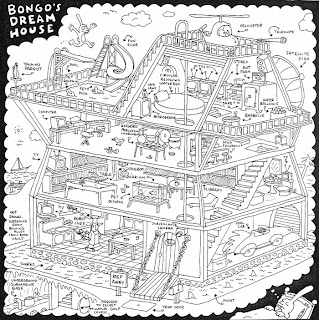 Bush must have stopped looking for Osama because he knew the real threat was Hank Scorpio. I mean, it's not like we're going to ever find him. He's more than likely dead by now without any proper medical aid for his conditions that he has had in the tiny bits and pieces of information that we hear every now and then. In a hundred years it'll be some very special of whatever show is ripping off X-files at the time. Finding the missing terrorist that gave America a black eye all the way back in 2001. Not that they'll even remember what happened on that day, but those sci-fi geeks who never forgot will enjoy said episode.

But there's something else disturbing about that picture of updated Bin Laden. I feel like I've seen him before. I mean, he has a striking similarity to Spanish Politician Gaspar Llamazares. In fact, let's get his portrait up there side by side with Updated Bin Laden. 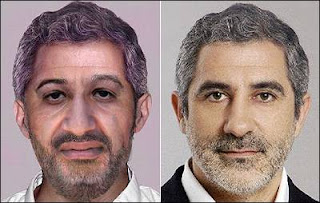 I mean, yeah. He's representing the United Left, a Communist Party, but I thought we were over the cold war and not trying to destroy communism anymore.. At least the FBI is fessing up to doing some tricky Photoshopping.

A MOCKED-UP image of how Osama Bin Laden may look today has been withdrawn by the US State Department after the FBI admitted it was partly based on a photograph of a Spanish MP taken from the internet.

The Photofit image of an older, greying Al-Qaeda leader bore a striking resemblance to the left-wing politician Gaspar Llamazares, a member of Spain’s Communist party and a critic of the US “war on terror”. It turned out Llamazares’s grey hair, jaw line and forehead had been simply cut and pasted from an old campaign photograph by an FBI technician.

The FBI originally claimed it used “cutting edge” technology to come up with new images of terrorist suspects for the State Department’s Rewards for Justice website.

However, Ken Hoffman, an FBI spokesman, admitted yesterday that the agency had used a picture of Llamazares taken from Google Images to update the Photofit.

He told the Spanish newspaper El Mundo: “The forensic artist was unable to find suitable features among the reference photographs and obtained those features, in part, from a photograph he found on the internet.”

The US government had previously been using a 1998 photo of Bin Laden, including on a wanted poster that offered a reward of up to $25m (now worth £15m) for information leading to his capture or killing.

Llamazares, former leader of the United Left party, was elected to Spain’s parliament in 2000. He said he would no longer feel safe travelling to the United States. “I was surprised and angered because it’s the most shameless use of a real person to make up the image of a terrorist,” he said.

“It’s almost like out of a comedy, if it didn’t deal with matters as serious as Bin Laden and citizens’ security.”

Llamazares intends to ask the US government for an explanation and is considering legal action. He said he has “no similarity, physically or ideologically, to Bin Laden”.

Bin Laden, who is wanted for the 9/11 terrorist attacks and the 1998 US embassy bombings in Tanzania and Kenya, is believed to be hiding in the lawless Pakistan frontier region bordering Afghanistan.

His exact whereabouts have been unknown since late 2001, when he and some bodyguards slipped out of the Tora Bora mountains in Afghanistan, evading airstrikes, special forces and Afghan militias.

HA HA HA HAHAHA HA. Yup, that's the FBI alright. I have to say that the level of competence of the American intelligence community is unparalleled. This is just comically incompetent. Only in America, right? I still can't believe they tried to pass it off as some very powerful and expensive high-tech equipment that produced what amounted to being the crop and cut/paste tools.

I just have to ask why though. Why the fuck would they take the time to do this? I mean, it's not like having him on wanted posters at the Post office with an updated image will get us any closer to finding him. If he's still alive he's some where far off and away from anyone who gives a shit about American news reports. You know how we don't give a shit about world news, I bet this photo wont even make it on that "news around the world in 60 seconds" segment.

Then again, now that we claimed a Spanish politician is Osama, I guess it will make waves over seas.. Only waves of laughter on how ignorant us Americans are. I mean, his picture must be the first on some Google image search for "Middle aged" or "early 50's" or something and that's just how it got tagged by these high-tech geeks in Washington. 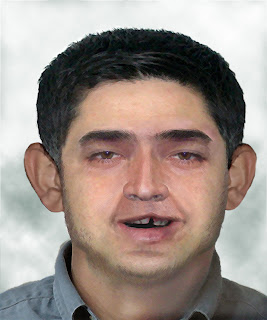 Just look at the average picture on the Rewards for Justice website. I mean, it's a fucking joke. Though I do think I found myself new picture fodder for if I ever decide to troll the online dating personals. Oh yes, baby. You're 85% matched to an updated Osama Bin Laden.

Then again, maybe the U.S. Government just learned something from Time magazine, who in 1985 predicted what Michael Jackson would look like in 2000.. 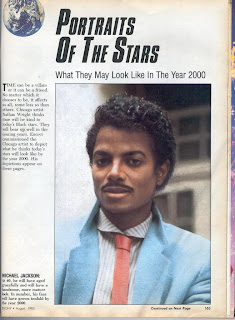