You Got The Right One, Baby! Soda Talk

You Got The Right One, Baby! Soda Talk

It's been a long time since I stopped drinking soda like if I was breathing air. Almost a decade ago I was drinking whole 2-liter bottles of Pepsi daily. I'm surprised I didn't have a heart attack. I'm pretty sure that wasn't very helpful to my health. I have to admit, I was addicted to the taste. How can you go wrong with the sweet sweet taste of sugar?

With Christmas past us, let's first take a look at what is new with the company that brought us the popular image of the jolly fat man we beg for things from, Coca Cola. Well, we beg santa, we just consume Coca Cola are vastly crazy numbers. Well, I don't. I only drink Diet coke rarely and I also indulge in the very popular and very much sought after Mexican Coca-Cola. So much so that a couple of months ago the New York Times talked about Mexican Coca Cola in an article Consumed: The Cult of Mexican Coca-Cola

The Coca-Cola Company is by now quite familiar with the Mexican Coke cult. It is true, acknowledges a Coke spokesman, Scott Williamson, that different sweeteners are used by the company’s bottling partners in different parts of the world, for reasons having to do with price and availability. But, he says, “all of our consumer research indicates that from a taste standpoint, the difference is imperceptible.”

The company principally imports the Mexican version to appeal to immigrants who grew up with it and draw nostalgia from the packaging they remember. Online you’ll find Mexican Coke cultists offering tips about tracking down grocers who serve a primarily Latino clientele. Surely this is part of the fun — nobody wants to be a snob on behalf of a product that’s easy to obtain. But Coke is in the business of supply and demand and has seen to it that Mexican Coke has found its way into places like Kroger, Costco and a certain sandwich shop in my not-very-Hispanic neighborhood in Georgia. I have lunch there every week or two, and while it would be cheaper to have a can of American Coke, I always pay extra for the 12-ounce bottle that says it’s “Hecho en Mexico.” I do this because I believe it tastes better, and I really don’t care why. Spend a few years writing a column about consumer culture, and what you learn is that we all think everyone else’s shopping quirks are weird and irrational — but that our own make perfect sense.

Hello Corn Lobyists! I wonder if that Coke spokesman actually fucking believes people buy the line that there is no difference in taste. I introduced Mexican coke to many people and every one of them has said that it was a night and day difference between the two. You really can't tell me that real cane sugar and HFCS taste even remotely the same. I'm lucky being in East L.A. given the amount of Mexican stores, taco trucks and any other venue that is lucky enough to sell real Mexican Cokes, Sprites, etc. for extremely cheap prices.

Those dumb cunts at coke almost lost the ability to sell their product in Costco. Last year Costco pulled all the Coke products off their shelves because Coke was playing hardball with the company and not giving them the proper prices they wanted. Coke was pulled off shelves and about four weeks later Coke gave in and lowered their price and Coke was put back on the shelf. This was a good thing considering Costco is one location where the average consumer who doesn't want to travel into East Los Angeles can get their fix of Mexican coke. 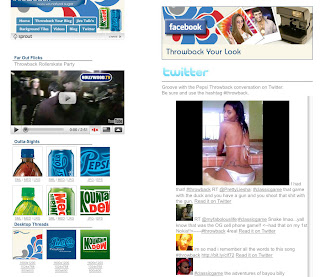 Moving on to the one time love of my life, Pepsi. They're move from using HFCS and using a sort of blend of real raw sugar in their Throw Back product line was really something else entirely. It happened through last summer and was so popular that they decided to do a holiday release of it. I guess they want to have a fighting chance when everyone else is buying cans of coke because it has Santa on the cover.

They actually set up a site devoted to it, to try and bring everyone together with Pepsi Throw Back Hub DOT com

Due to all the Throwback tweets, Facebook fan pages, videos, blog posts, pics & pleas, Pepsi Throwback is coming back!! Starting December 28th Pepsi and Mountain Dew Throwback will be available again for 8 weeks with the same formula and natural sugar, but this time with an even more rad vintage look! 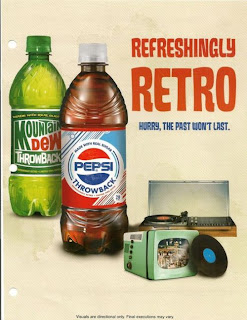 It really does make it seem like Throwback is a lot like the McRib. Hey Pepsi, stop fucking with us and let us have the endless supply of tasty tasty delicious non-HFCS soda, will you? Actually, don't. I know my self control will not be enough to hold me back from consuming a lot of unneeded sugar filled soda.

While it will not contain HFCS, it will still be drinking empty calories and I do enough of that with my massive amount of beer consumption. The only thing that would be the final nail in the coffin of that would be if they released a nostalgic version of Crystal Pepsi. I know it was otherwise hated by the masses but I enjoyed it and I feel that they could ride that nostalgia wave for a short run. It wouldn't be amazing but it would sure bolster sales in a fiscal quarter.

It's really for the better that they don't release those. I'd rather just not have that option of buying soda that I really want and avoid any stupid PR ad that comes out like the following one from New York;

While it may not completely destroy your diet, it doesn't help and really, when you're like me and on a mission to NOT gain a single pound since Thanksgiving and not only that but also lose a couple of pounds if I can, I really don't want to waste a calorie point on Soda.
Posted by Booster Gold / Javier J. at 6:07 PM