Show The Cops Who's Boss!

Show The Cops Who's Boss!

It's a new year and that means you should grind your teeth and beat someone up to show them you're not going to be anyone's bitch in this jail! But in order to avoid doing all that, you have to avoid going to jail. here's how you should do that very simple thing; 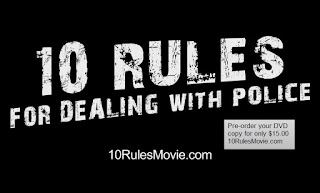 And who's the lawyer you're going to be seeing in this video?

Who you might remember from The Wire as Clay Davis' attorney.

The preview shows a guy getting pulled over in Maryland, and a kid getting stop-and-frisked in what looks like a scene straight from The Wire. So maybe they were going for that Clay Davis' attorney look after all. Want to check out the preview? By all means;

If you recall the video Busted, that was one of the best informational videos anyone could have asked for when it came to dealing with police encounters, but now it seems we're going to get even better.


But as detailed and "lawyer up'ed" those steps are, I think I should write my own;

Then again I never got that "professional courtesy that cops give each other. I never go to best buy and pick up a Sony dvd and say.. "Hey, I work for Fox, want to give me the courtesy of giving me this bluray at a cheaper price? No, why not? Because it's fucking stupid.

Even simpler in 1 step:

The short answer is "Oh my fucking god, Don't say anything!"

The real answer: the short answer assumed you're not a total idiot but in case you are you should read this longer one where we qualify that not only are there certain laws that prohibit you from literally saying nothing in most states, the cops will give you a way harder time if you only say the absolute minimum and should rather try to both minimize and trivialize the words that come out of your mouth; for your own safety try to treat the cop like a friendly accquaintance and even then you still might get fucked -please buy our book "20,000 Rules for Interacting with Corrupt and Sadistic Authority Figures" to read the rest of the answer.

How else are you going to use the rights your forefathers fought and died for to commit crimes?
But I mean, these are some sound pieces of advice.. I mean, holy shit do not keep illegal things in your fucking pockets What a shock. I suppose by now I've convinced you to waste 15 bucks on this shit. If not, here you go

What if the officer lies and the judge believes him because he wants to look tough on crime for his upcoming election and your public defender is an overworked hack. The whole concept of elected judges is one of the worst things about America. Congratulations on the bulk of your judicial system is just as corrupt as fucking Eastern Europe. Matt Damon is right, America is like a really bad Disney movie with the Republicans playing the part of the dunce... except they have real power.

When I was driving through Texas once I saw a campaign sign for a judge who was promising all these Christian values and claiming to do whatever he can to make things more wholesome. I imagine that he'll throw the book at the average person

But hey, there you go. That's the law. The best way to just avoid dealing with the cops is to not do anything illegal. I know I'm pretty paranoid with the police in general, it's just that I've been profiled and hassled a bunch in my day and age because I was in the wrong neighborhood at the wrong time for whatever minor reason. I suppose that's being to specific. I mean, who does like to deal with the police?
Posted by Booster Gold / Javier J. at 4:10 PM