Haiti Got Fucked - Can You Spare a Dime?

Haiti Got Fucked - Can You Spare a Dime?

As you may know by now, Haiti got shaken with a massive earthquake. Over 100 people are reported missing from the UN headquarters that collapsed. At least 23 U.N. peacekeepers and police officers were reported dead. The sewer system sucked before and now it's probably running through the streets even more so. A lack of clean drinking water is going to cause an epidemic there to be the cherry on top of that shit sundae.

With over 100,000 dead and massive amounts of damage I'm going to throw it out there.. Donate. Donate.. DONATE!
But Javier, what's the best charity to donate to so my money doesn't egt hijacked by bureaucrats and used to build a new palace? Don't worry, I'll steer you to the good guys in all this. Here's a couple of the good donation websites that I found you can send your hard earned money through to the aid with;

If you're feeling really lazy, you can always stop Sexting for a second and you can Text "HAITI" to 90999 and it donates $10 to Red Cross relief efforts and bills your cell phone

Partners in Health is pretty good. They're efficient with their money and they're extremely focused on the development of public health infrastructure that can be maintained sustainably by the local community.

Or you can go with the one I donated to, Doctors without Borders Which was devastated as they lost all three aid centers they had located in Haiti.

If you want to learn more about Medecins sans frontieres (Doctors without borders) and what they are doing right now, you can see it on their website.

Remember that Haiti is in the state that it was in prior to the earthquake because of America. So if it's not a guilt trip enough that this situation could happen to Los Angeles, than it should be a guilt trip that us Yankees should do something about it.

Studies also show that showing charity can extend one's lifespan. Okay, I just made that up. I'm sure some Arizona university will prove it true though. I mean, I'm not going to be the only one telling you this. Just turn to CBS' David Letterman and he'll tell you the same

Rev. Pat Robertson declared, during his show on CBN, that the reason for Haiti's troubles is the country's pact with Satan. According to Robertson, Haiti struck a deal with the Devil to get free from France in the early 19th century. After Haitian slaves freed themselves and their country from France, this was approximately the view held by American slaveholders of the Haitian Revolution as well.

I look forward to when he dies so I can piss on his grave. 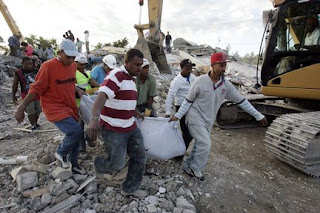 Remember that the World Bank headquarters, the UN Building, the Parliament building all collapsed and 100,000 Haitians are dead (probably more), not to mention the loss of three Doctors without borders aid centers. Look into your heart and justify it in thinking that this is the way to say "Fuck you, Pat Robertson".
Posted by Booster Gold / Javier J. at 8:52 AM