When The Saints Come Marching In... to The Super Bowl!

When The Saints Come Marching In... to The Super Bowl!

Well, I'm not a big football fan. I mean, when the fuck is the super bowl anyway (please don't send me hate mail, I actually know) but it seems that I really don't give a shit. Well, maybe I do. I like the ads. But all that boring shit between the next million dollars flushed down the toilet isn't all that entertaining.

On the other hand, Chocolate City is going to the super bowl fr the first time! Wooooo hoooo. Oh man, go saints.. Go and fucking lose! Please. I mean no disrespect, of course. It's a nice thing since New Orleans has gotten the shaft in every other meaningful indicator of civic success. Even if you don't like football, you should be a little happy that an oppressed southern shit hole is a little happier leading up to the Super Bowl.

Neither team really deserved to win and the Saints literally won that because of a coin toss. It seems that the overtime rules are just dumb as all fuck in the NFL. College needs to borrow NFL playoffs and NFL needs to borrow college OT rules. At least just for one year to see how much better shit works out when you actually play the game in a not so fucked up manner. 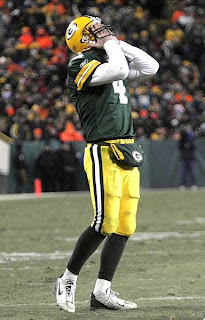 And how about that game. I mean, how do you go +5 in turnovers and need overtime to win. Good god, both teams were sucking badly. The game was embarrassing for everyone involved. Brett Favre should just kill himself. He got his decrepit ass owned hard. I'd like to point out that when Farve was QB for Green bay, he also threw an intercept and lost in OT during the championship. History sure does like to repeat itself. Guess it's off to the Sears commercials now. Ha!

It's pretty funny that the saints strategy in the game was obviously to hit favre as much as possible, legal or not. But hey, the Saints actually stripped the ball on most of the fumbles. So that was good on them. But yeah, the Saints won by a coin toss. Then again, the Jets should have thought harder about coin physics in lowland areas.

Maybe the Vikings should fucking learn how to call a coin toss. Here's a hint, you never call heads. Ever. Did you not learn that tails never fails? Well, at least Tails only sometimes fails. At least Favre can win the pro bowl, right? Ha. Yeah, I'm just fucking with you. Fuck that douche. Who actually gives a flying fuck about some dumb shit sport where you get to spend 4 hours watching commercials and waiting for something like Janet Jackson's tit fly out or something. It's really very boring. Have you ever been to a football game in person? Talk about boring shit.

So why do I want the Saints to lose? Because I plan on going to New Orleans this year. Specifically around the time after the super bowl and I know that it's going to be a fucking mad house for months to come if they win the Super Bowl. It'll be tearing the roof off shit and showing your tits without the need of beads. It'll be just that crazy and since this trip is part of my mission statement as well as potentially my first road trip with my potential new car, I want to make sure it's a good one. The New Orleans Saints winning the first Super Bowl they ever go to will make that a bit difficult. 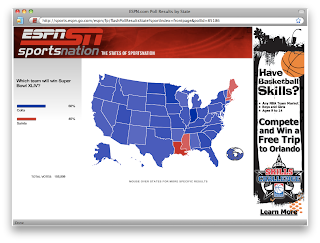 So come on, Colts, I really don't give a flying fuck about you, but I do know I don't plan on visiting your shit town any time soon. So win it all and take it back home to your fuckville.
Posted by Booster Gold / Javier J. at 6:26 PM