They say a picture is worth a 1000 words. In this case, I want a picture to not speak for itself. I plan on giving you the words of what makes it so special. In this series of images I'll continue to show a single image and give you some back story to bring out a new meaning to the image.

This is a photo of Mohammed Alim Khan, the Emir of Bukhara. 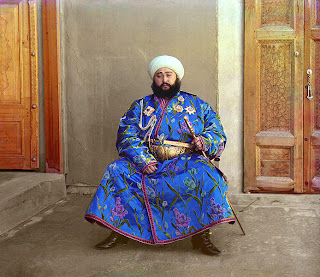 
I guess if that's not clear enough let me repeat that. It was taken in 1911. The significance of the photo, to me, is how brilliant the colors are, given that black and white photography would be the norm for decades after, one would imagine that early color photographs would be blurry and indistinct, but here is a picture taken at the turn of the 20th century which shows a man in shining colors in incredible sharpness.

three black-and-white images taken with red, green and blue filters respectively. The three B&W images are then developed onto glass slides and projected through a three-stage stack of colored filters so that the filtered-out colors now reappear in the correct part of the picture.
It is not 'color photography' in the modern sense. What you see there is the digitized copy of the projected final image.

The tricky part is getting the three original plates to line up so you don't get accidental overlaps and bleeding of colors. Amazing work for something over 100 years old.
Posted by Booster Gold / Javier J. at 12:24 PM