If you pay attention enough to advertisements, you'll know that Jack, from Jack In the Box, got hit by a car.


Many suspected that Ronald McDoanld was behind the wheel but he was ruled out as a suspect when it was discovered that him and Wendy checked into a motel roughly around the same time. I don't want to imagine the ginger kids they'll produce...

Back to Jack though. Looks like his near-death condition has caused Jack to want to change things up in his little box there.

As reported in the Orange County waste of paper.

Jack in the Box will announce today a major brand overhaul that includes a new modern logo, the debut of sliders and a makeover at more than 2,000 restaurants.

The brand changes are expected to be announced this morning by a “re-energized” fictitious Chief executive Jack Box.

The mascot’s appearance will be his first public outing since he was hit by a bus during a Super Bowl commercial. The mock month-long tragedy involved a series of commercials and YouTube videos chronicling the brutal bus bashing.

Now I'm not the biggest fan of Jack in the box. But that's mainly because I feel you can get better burgers at same price as Jack's charges. So the logo change to this really doesn't effect me in the slightest.

A New Box to be trapped in

In fact, I think the new logo looks pretty neat. It's a nice change and does have a very nostalgic look for a fast food franchise. It's sort of Madmen meets Burgers.

Along with the new logo we'll see a couple of brand new items on the menu including sliders. Which I really can't figure out what makes them all that special. I have had White Castle before and well, I can tolerate them well when there's nothing else or bigger on the menu. But if you can get a real burger... or as real as you can get from Jack in the Box, why bother with sliders?

I see the same thing with Burger King since they introduced sliders a bit ago. I'm not sure if the home of the whopper is all that great of a choice to bring about the smaller meal option. Yeah, no thanks. 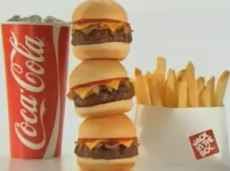 Here's further proof that these aren't sliders at all. Hamburger today reports on the matter. They're dinner roll size buns but aren't sliders as sliders are typically steam fried with lots of slimy onions. But further more, BK has been doing a lot of free samples on these and from what I can tell, no one is caring. Hey, if you want small two bite burgers at the home of the whopper, more power to you. Just seems really silly to pay $5 for what could get you two whoppers.

In the end, did they really need a marketing campaign of hitting someone with a car to bring about change to the franchise? Do the newest additions really make you want to go to Jacks more than normal? It's cheap food. Simple as that. I say as long as you keep the two tacos for 99 cents on the menu, you can pretty much don't need to bash Jack with anything and I'll be a-okay.
Posted by Booster Gold / Javier J. at 10:02 AM