Maybe it's because he has no pants or maybe it's just because he's a terrible terrible person.... well, duck. But Donald is one evil bastard. You may only be familiar with his terrible temper, but Donald is to the point of willingly killing without any remorse. As seen in this comic. 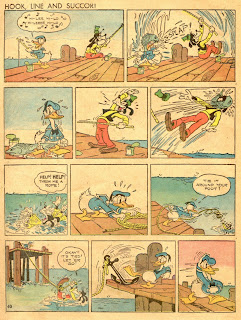 In hid defense, no one does that to Donald. He'll bury anyone who hits him with a fish. Goofy had that shit coming! This isn't the first time he's fucked with the wrong person. By person I mean Duck and by duck I mean Donald. 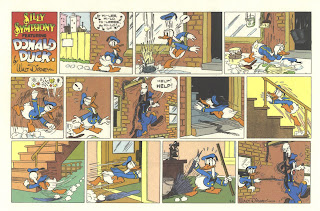 I'm just a little confused by this one though. Maybe his rage has caused him to forget that he didn't need to pull a feather from the duster. He's a duck. His entire body is made out of feathers. Again, I think this is just because the rage has blinded him and he simply wants to kill Goofy any way possible.

This clear sign of an imbalanced character is nothing new for Donald. If you've been following his white tails for a while you'd know that he's ripe for bouts of rage. 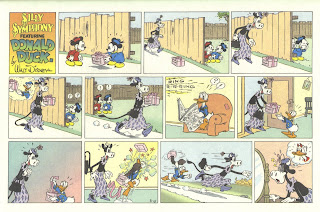 Its my understanding that Donald Duck gets things done. Say what you will about his attitude and short temper. He at least is able to get an elevator to come back down. Screw this waiting around for everyone's stop to come up before coming back down!

I'm not even sure who this cow bitch...er I mean Cow is. I remember her from that Mickey toon that he's conducting an orchestra in the park. Merry Melody. I'm pretty sure that she's dead, not because Walt was some evil bastard, but because Donald took care of her in the only way that Donald knows how... killing. 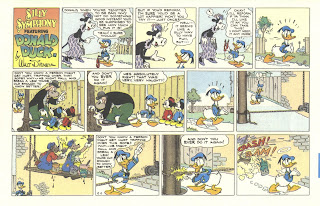 But this short fused duck couldn't last too long on the outside. I'm pretty sure his feisty attitude must have been because he was in prison before. You know what they say, a duck can't be free for too long before he ends up back in the can.

Ah, the wonders of a filler post. Don't worry, I already have a lot of pieces done for the month. So it's sort of just shifting gears here and letting you breath before I shove a shit ton of blogs in your face. In any case it's always nice to see Donald kill Goofy with no remorse. Don't tell me you never had that feeling to kill that clumsy mother fucker because I'd call you a fucking liar to your face.

Goofy deserves to die. Simple as that.
Posted by Booster Gold / Javier J. at 2:34 PM