blockbuster: too many copies of Big to fail

Blockbuster: Too Many Copies of Big to Fail


I once worked for this company. It was a pretty interesting situation. I was young and the idea of being a film geek was nice. I was one of those pretentious douches you see at a video store who are high above what everyone else rents. Only I wasn't that at all. I liked the ability to rent five movies a week free of charge and I didn't instill or look down on anyone for whatever shitty movie they were getting. I can relate, I liked shitty movies also. Besides, it's Blockbuster. Do you honestly think they have that great of a selection anyway?

Among the very few perks of working that job was that I was able to create new memberships. It gave me a reason to stop running the register, because there's only so many times you can hear someone complain about their late fees. I would start the application for new members to get their Blockbuster video rental card. 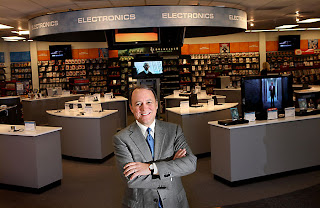 What I liked about that was they you had the data system in your hand. This allowed me to create about 50 different fake accounts for myself. Typically with comic book names like Bruce Wayne, Hal Jordan, Clark Kent. All Blockbuster renters with fake addresses and other such novelty information. I wasn't trying to do this for any malicious intent. I just was really bored. It sure beat dealing with some of the customers.

At one point I had 30 different block buster cards. What I would do is rent a ton of films and then just fuck around with the cases. Rent Fight Club into Alice in Wonderland, Alice in Wonderland into Shawshank redemption, and so forth and so forth. I think the employee who was pulled off of running back video tapes to try to sort the mess I created would silently thank me for giving him busy work. Otherwise he would have to deal with the fucking customers. Let me tell you, I'm glad for netflix. I think those employees have it sweet hiding behind a phone or monitor when someone complains about their film not being top of the line.

Whenever I was faced with the chance of dealing with one of those folks who complained about their late fees, I would typically just take the late fee off. It wasn't worth my time to stand there and hassle with them for twenty minutes and allow the line to get backed up. Best to move them along. See, I was a good customer service person. I'm sure that allowing millions in late fees to be forgiven was one of the many reasons that...

Blockbuster is about to sink

Kirkland & Ellis LLP was asked to evaluate restructuring options for the company, which may include a “pre-packaged” or “pre-arranged bankruptcy,” in which much of the restructuring work is completed out of court, the person said. A pre-packaged filing is more advanced than a pre-arranged bankruptcy as it includes agreements from creditors about the outcome of the company’s reorganization.

Blockbuster, with more than 7,500 stores in North America, Europe, Asia and Australia, has faced increased competition from Netflix Inc., the largest U.S. mail-order movie service. Dallas- based Blockbuster has expanded its digital library of movies and made them available on mobile phones and Web-connected TVs. It plans to offer 90,000 DVD titles by mail, according to the company’s Web site. Karen Raskopf, a Blockbuster spokeswoman, declined to immediately comment. Kate Kortenkamp, a Kirkland spokeswoman, didn’t immediately return a call seeking comment.

What's that old Butterfly effect theory? Yeah, I'm not even slightly surprised that this happened to them. Please don't bail them out. Renting via Blockbuster was an obsolete system to begin with. Oh, I'm sorry that you stuck with an outdated media delivery infrastructure for so long. Guess you should have been refining your strokes and not fucking around with outdated practices. 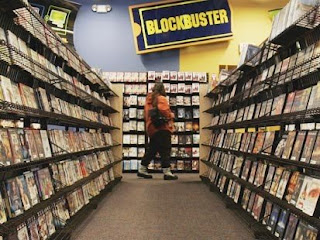 The empty halls of a relic

Who would have thought that the thing that's just like Hulu.com and Netflix but cost more money and requires me to put on clothes is going under? What a shock. Netflix is great, I don't have to put on clothes to choose my films or make smalltalk with plebes at blockbuster .

I'm not even sure why people didn't just turn to their public library. Even if you hate books, you could still rent movies for free there. I'm sure they don't even edit down the movie. The only incentive is that the library doesn't rent out softcore movies.

I guess it's only fair that the outdated get taken out by the new hottness. Blockbuster did away with all the mom-and-pop rental stores that were run by some douchebag who's scene every movie made and is a film buff living near dawson creek. god I hated that fag. 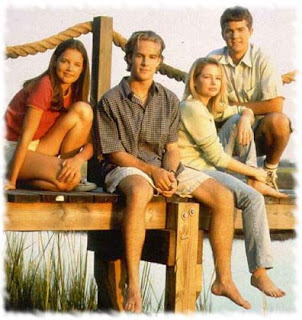 I saw one Blockbuster trying to redo the interior of the store and have a bunch of soda fountains and some tables for people to sit and chill. Who the hell is going to buy a soda at blockbuster and sit around? I can't say I wouldn't be paid to be in there, because for a while I was, but still. Starbucks isn't even cool to hang out in, why would a Blockbuster be any different?

Perhaps the only tragedy behind all this is that you wont get all those made for blockbuster movies anymore. A lot of indie films were produced because they'd be able to make a ton of money through the rental windows. So blockbuster really did help produce some films. Many where total shit, given. But there was a few gems like Boondocks saints that made it all worth it. Without them around, perhaps we'll see a lot less shitty films and because of that, we'll see only a couple of those gem indie darlings come out of it all. 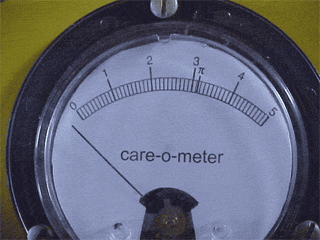 Yup, it's reaching critical limit on how much I care about Blockbuster.

If the sudden closing of businesses like Circuit City have taught me anything, it's that I really can't wait until they finally announce that they're going under. The clearance sales are going to be great. 800 DVDs for a penny.

If this recession has a good side, it's that we get to rid ourselves of shitty companies that were just going to barely hang on and delay progress another decade or so. I'm not a fan of big chain stores to begin with. Old white ladies approach minorities and think they work there. I don't know how many times I got asked store employee questions while wearing whatever similar color shirts as the workers.

Best buy should also join them since they make every aspect of their business a scam. Have you've tried that best buy rewards card? Shit if I know what it does. I get a 10% coupon every couple of months that expired weeks before it got here. The whole money back aspect also has expiration days that are arbitrary. "If youd like i can get you service protection on your dvd for only 60 dollars." 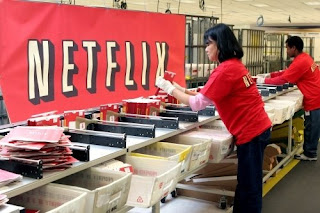 The future of laziness

Those nerds trying to figure out where you're going to get your games at from now on?
Gamefly and if you're not using netflix for your video renting then I have no idea what to tell you. Just please stop annoying the workers there. As one who suffered through that job for a couple of years I can tell you it's total shit.

I think the only good aspect of working there was the videos we would play. The company sent in a month video that we had to play constantly on the tvs. By day two all the employees would know it by heart. Every trailer, every ad for blockbuster (As if you need reminding to go to blockbuster while in a blockbuster) and then some stupid music videos.

We got dilusional with it and made up stupid lyrics for it. "I wanna Pizza" and "This slice is just too cold.." I'm sure that's just something lost on the few people who were driven utterly insane by it working there with me.

For all of you who are going to rent stuff and never return it, they will undoubtedly sell their late fee debt to some shitty debt collection company that will wait 5 years and then start calling you 3 times a day in order to collect it along with $300 in penalties.

The onion does a great piece to mock Radioshack. I think it could easily be applied towards Blockbuster.

FORT WORTH, TX—Despite having been on the job for nine months, RadioShack CEO Julian Day said Monday that he still has "no idea" how the home electronics store manages to stay open.

"There must be some sort of business model that enables this company to make money, but I'll be damned if I know what it is," Day said. "You wouldn't think that people still buy enough strobe lights and extension cords to support an entire nationwide chain, but I guess they must, or I wouldn't have this desk to sit behind all day."

The retail outlet boasts more than 6,000 locations in the United States, and is known best for its wall-sized displays of obscure-looking analog electronics components and its notoriously desperate, high-pressure sales staff. Nevertheless, it ranks as a Fortune 500 company, with gross revenues of over $4.5 billion and fiscal quarter earnings averaging tens of millions of dollars.

And I leave you with this final video, also from the Onion.