30 Dates Of Nights: 7 Making Her An Offer She Can't Refuse

30 Dates Of Nights: 7 Make Her An Offer She Can't Refuse

You know this spill already. The L.A. Times released this article about eight dates under $25 in Los Angeles a long ass time ago and since then I have been coming up with an ongoing list of my own. While the majority of them have been outdoor cheap exciting treats, there has been a couple of stay indoor adventures mixed in there.

This week in 1972 The Godfather was released. That's 37 years ago for you not in the know of this wacky thing called math. Unless you're dating a cougar, anyone you may have any potential to go out with may not have seen this timeless classic trilogy. Yes, I said it. Trilogy. While the third one may not have been great compared to the other two but it's like comparing cold pizza to something freshly baked and out of the oven. It's still good, just not as good as the really good stuff. But it's still tasty. 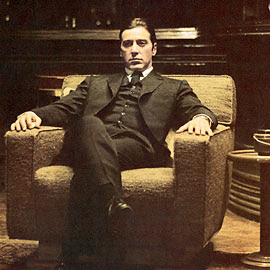 take a seat and enjoy a film..

Which brings into question the potential of sitting down and watching them. Perhaps like wine, they have aged well enough to enjoy in a marathon fashion? So building a theme around the Godfather trilogy seems like the perfect way to spend nine hours of your time. Make an Italian dinner or order in and go rent the films.

How about you make lasagna together? The assembly of that dish can be a task in itself. Helping one another in it can bring you together... it could also tear you apart if you fuck it up too much now. If you can't take the heat, get out of the kitchen. While it takes a little work to assemble it's still going to pay out great in the end.

After it's all cooked you two grab some wine or some Italian sodas and sit down to watch the epic one by one till your butts get sore from sitting through the multiple endings. That and leaving the room when Sophia starts her terrible acting. Yeah, she's a better director but we wont forget that god awful acting... 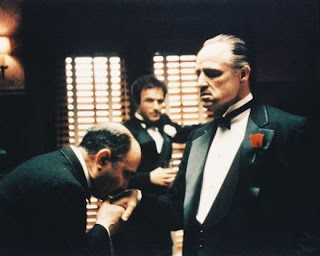 Maybe they'll be smooches after?

Pretty simple segment of 30 dates of nights, I must say. The real hard work is getting through all the films. That's a lot of sitting to do and the third one... it's not that easy to get through it after you've enjoyed such masterpieces before it. But it'll be something you tell your godchildren and their godchildren about when they ask about how the two of you braved it out... and enjoyed tasty food together.
Posted by Booster Gold / Javier J. at 7:46 PM