I'd Rather Die Than Give You Control

I'd Rather Die Than Give You Control

Today had a not so cryptic message from Trent Reznor on Nin.com

Towards the beginning of my career in Nine Inch Nails, our biggest break came in the form of an invitation to perform a series of shows with Jane's Addiction. These performances essentially created and defined the term "alternative" rock in the US, created an ongoing festival franchise that is still thriving (Lollapalooza), set the stage for Nirvana to shift popular taste a few months later, and were really fucking FUN to play and attend - truly the best times I've had. The shows were epic. So epic, they propelled NIN to the "next level" (whatever that means), but caused Jane's to implode. The band broke up at the end of that tour.

Fast forward to the present. Corporate rock STILL sucks. A friend tells me they saw the original Jane's lineup play a tiny show in LA that was unbelievable. I break out my Jane's records and am amazed by how vital they sound. These guys were the real deal and in this current climate mostly dominated by poseurs and pussies it was refreshing to hear something that sounded dangerous, volatile, beautiful and SINCERE.
Emails were sent, phone calls were made, dinner was arranged, ideas were discussed and the next thing I know we're in the studio experimenting. We laugh, we get to know each other, we cry, we yell, we almost quit, we record LOTS of guitar solos, we discuss, we actually begin to all communicate, we yell some more, we become FRIENDS, we laugh again and we do some great things. I get to see first hand why they broke up all those years ago but I also get the chance to see four distinct personalities that become an INCREDIBLE band when they're in the same room.

In NIN world, 2009 marks the 20th anniversary of our first releases. I've been thinking for some time now it's time to make NIN disappear for a while. Last year's "Lights in the Sky" tour was something I'm quite proud of and seems like the culmination of what I could pull off in terms of an elaborate production. It was also quite difficult to pull off technically and physically night after night and left us all a bit dazed. After some thought, we decided to book a last run of shows across the globe this year. The approach to these shows is quite different from last year - much more raw, spontaneous and less scripted. Fun for us and a different way for you to see us and wave goodbye. I reached out to Jane's to see if they'd want to join us across the US and we all felt it could be a great thing. Will it work? Will it resonate in the marketplace? Who knows. Is there big record label marketing dollars to convince you to attend? Nope.
Does it feel right to us and does it seem like it will be fun for us and you? Yes it does.
Look for tour dates soon and I hope to see you out there.

The writing is on the wall here. No need for any AIG game to decrypt this, Nine Inch Nails will at the least take a long time off and at the extreme, be done with and finished after this tour run that sounds like it will be very low key. And I'm alright with that. 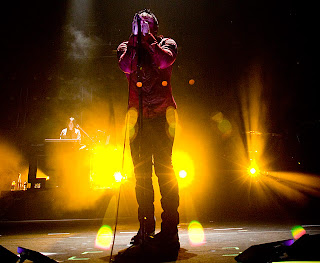 Don't get me wrong. The Tour of Lights was amazing. Sure it was in Inglewood (up to no good!) and while it provided some much needed bacon wrapped hot dogs after the show and hearing some classic Nine Inch Nails songs perform on the floor, I don't think it was as good as when I saw them in a small concert setting back in the late 90's.

If this is the final run of NIN, then I'll be pretty happy to see them go out not with a huge bang of a mega concert event but with the way they started. It's like how they started. Small venue, intimate setting. If they want to go out this way, I'm all for it. I'll be there to hear them like I usually am. I remember getting my Quake PC demo cd and listening to the music the whole way through. Sure, they don't have many lyrics. But the sound scape of noise that Trent has come up with changed the way I listen to ambient noise forever.

Am I sad to see this as the potential end? Not really. It has been 20 years. And while I see across the room that Street Fighter is turning 20 and I'm still going strong in playing that, creativity and the change that Trent and NIN has gone through in that time is completely different. While still sounding great, I have no qualms in letting it go and enjoying the music that I once enjoyed as an angst filled youth.